People’s attitudes about science, their level of scientific knowledge, and the attention they pay to scientific developments have long been a topic of interest in the scientific community and among policymakers. The National Science Foundation (NSF) has since the early 1980s tracked people’s attitudes toward and understanding of science in its bi-annual “Science & Engineering Indicators” series. The NSF’s most recent report on the topic – released in 2006 and based on a 2004 survey – finds that Americans are generally supportive of science, but often not well informed about scientific topics.4

This report seeks to sort through the mix of resources people use to get information about science, explore where the internet fits, and how it matters. The survey was commissioned as a component of Evidence: How Do We Know What We Know, an NSF-funded, Web-based project being designed by the Exploratorium to help users investigate the nature of scientific understanding. By providing examples and experiences based on current scientific investigations about topics of interest to a broad public, this online resource gives users the opportunity to explore their own processes of knowledge construction and compare it with the kinds of processes used by scientists.

As one of the first museums to bring resources to the public through the World Wide Web, the Exploratorium is interested in learning how people use the internet to engage with science. The Pew Internet Project’s extensive experience in understanding the role of the internet as an important informational and cultural resource in the United States makes it possible for this survey to address the issue.

Among the questions this report explores are:

In the landscape of how people get science news and information, the television dominates, but the internet is the next most popular source.

All respondents to the Pew Internet/Exploratorium survey were asked where they have ever gotten news and information about science, and where they get most of their science news and information. As the table shows below, the internet is half as likely as television to be cited as a main source of science news, but it is the second most cited source across the range of media. 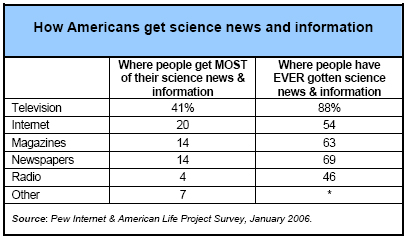 The figures above are consistent with those from the NSF’s 2004 survey which asked about people’s primary source of news about science and technology. In that survey, 41% cited TV, 18% the internet, 14% a magazine, 14% the newspaper, and 2% the radio.5

The table below contrasts the demographic profiles of those who get most of their news and information about science from television and those who say the internet is their main source for this kind of information. People who turn to the internet most for science news and information are more likely to be young, well educated, and able and willing to make the monthly outlay for a high-speed internet connection. Those who rely on television tend to be older, less educated, and less likely to have a child under the age of 18. 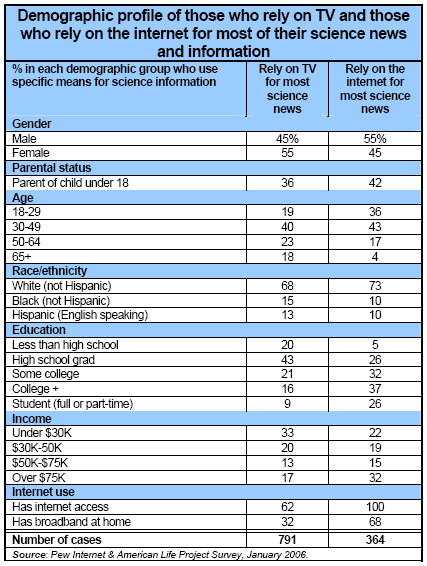 People under age 30 are equally as likely to say they rely on the internet as television for most of their news about science. 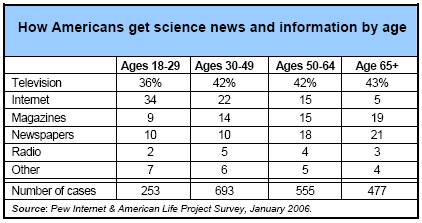 People use the internet extensively to learn about science – for research, homework, satisfying curiosity, and looking for evidence about scientific propositions.

Although about one quarter of all internet users say they get most of their science news and information from the internet, the vast majority – 87 % – of internet users have at one time turned to the internet to get some piece of information about science. Note the contrast between 87% and the 74% figure cited above as the share of internet users who ever have gotten online information. The difference arises this way: When respondents are prompted about specific online science activities, they remember things they have done with respect to science that they don’t when simply asked if they have ever gotten science information online. As the table below shows, online users are likely to use the internet almost like an encyclopedia – looking for meanings of specific scientific terms or looking for an answer to a specific question about science.

3 out of 5 (59%) internet users have used the internet for online queries connected to scientific evidence. 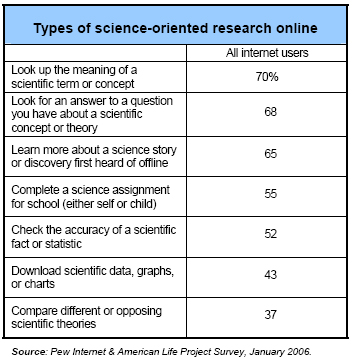 For those with high-speed internet connections at home, 91% have done at least one of these activities online.

As to specific online sites which provide science content, the table below shows the share of internet users who have ever been to the listed sites. 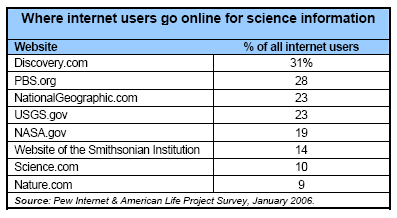 Part 3 of this report will analyze in greater detail the usage patterns for these sites and compare use of online science resources to offline ones, such as going to science museums, reading science magazines, and watching science TV programming.

Those who have gotten science news or information online sometimes dig deeper into a piece of scientific information. Specifically:

Fully 80% of those who have consulted science information online have done at least one of these three activities. Those who use the internet to check the reliability of information they have found online are also likely to use offline sources to further check the fact. Fully two-thirds (68%) of internet users who have checked into a science fact online also have checked with an offline source to assess its reliability.

For those in the 18-29 age group with high-speed connections at home, the reliance on the internet for fact-checking is pronounced. Fully 71% of those who have gotten science information online have turned to the internet to find out more about the reliability of scientific information; they are only slightly more likely than average to have checked with an offline source (57% have) or looked up the original source of information (56% have).

Convenience is a big driver of people to the internet for science information.

When probed further about where they turn first when looking for science news and information, 61% of people who have gotten science information online identify the internet as their starting point; 69% of home broadband users say this.

Online users, by happenstance, run into science news and information when they log on for another purpose.

It is also the case that people who have more internet experience are more likely to run into science information online than others. Three quarters (74%) of internet users who have been online 10 or more years have come upon online information while online for another reasons compared to 61% of other online users.6 This is because online experience is associated with more extensive internet surfing habits.

A somewhat greater share of home broadband users (70%) says they have encountered science information when online for another reason. Online experience and connection speed tend to amplify one another a bit; 76% of those with broadband at home and ten or more years of online experience have come across science information in the course of an online session intended to do something else.

The Internet as a Resource for News and Information about Science Acknowledgments
Part 1. The Internet and Science News and Information
IntroductionIn the landscape of how people get science news and information, the television dominates, but the internet is the next most popular source.People under age 30 are equally as likely to say they rely on the internet as television for most of their news about science.People use the internet extensively to learn about science – for research, homework, satisfying curiosity, and looking for evidence about scientific propositions.Consumers of online science information are into fact-checking – sometimes using online resources but also using offline ones.Convenience is a big driver of people to the internet for science information.Online users, by happenstance, run into science news and information when they log on for another purpose.