We asked respondents to think about the last time they went online for health or medical information, hoping to capture a portrait of a typical health search. As in past surveys,12 the typical online health information session is often undertaken on behalf of someone else, starts at a search engine, includes multiple sites, and has a minor impact on the person’s health care routine or the way they care for someone else.

Half of health searches are on behalf of someone else.

When someone gets sick, it is often the case that friends and loved ones help out by bringing food, taking care of household chores, or sending their best wishes. It seems that the internet provides another way for Americans to show the love: Serving as an online research assistant.

Forty-eight percent of health seekers say the last time they went online for health or medical information, their quest was related to someone else’s situation. Eight percent say their last search was for both themselves and for someone else. Thirty-six percent of health seekers say their last search was in relation to their own health or medical situation. Eight percent say they do not remember or did not answer the question.

Two-thirds of health information queries start at a search engine.

In 2005, the Pew Internet Project reported that search dominates the typical online day and internet searchers’ success generates a remarkable sense of confidence and trust in search engines.13

There is a new crop of medical search engines which hope to change the way internet users approach health information online, but since they are so new we did not include them in our survey. Some examples of these “vertical” search engines include: Healthline.com, Healia.com, Kosmix.com, Mammahealth.com, and Medstory.com but the industry also awaits word on Google’s plans for expanding this category of search.

Most visit two or more sites in a typical health information session.

One-third later talked to a doctor about what they found online. Two-thirds did not.

One of the concerns that the medical community expresses about online health seekers is whether they are self-diagnosing and self-medicating based on the material they find online and without consultation with medical experts. It has probably always been the case that people do not discuss every book, magazine article, or health-related conversation with their doctor. But interest in the typical online health information session persists. This study finds that 33% of health seekers later talked with a doctor or other health professional about the information they found online during their most recent search. Sixty-six percent of health seekers did not talk with a health professional.

In our survey, e-patients whose last search was on behalf of themselves were more likely than those who searched on behalf of someone else to later talk with a doctor about what they found (42% vs. 31%). This makes sense; an internet user might deliver a packet of online health research to a loved one and not accompany that person to her doctor’s appointment to discuss the material.

Indeed, those who have had relatively recent contact with doctors are more likely to have discussed online health information with them. Thirty-five percent of health seekers who have seen a doctor in the past year discussed what they found online during their last health information session with a health professional, compared with 23% of those who have not visited a doctor in the past year.

An April 2006 article in the journal Preventing Chronic Disease provides an interesting comparison to our question about a respondent’s most recent health-related query by asking a more general question. Fifty-three percent of e-patients in their survey said they “sometimes” shared the information they find online with their doctors.14

Doctors may play a role in an e-patient’s decision to bring up online health information during a clinical conversation. Marc Siegel, an internist and associate professor of medicine at the New York University School of Medicine, recently wrote about his own attitudes toward “know-it-all” patients. A series of bold e-patients who insisted on being partners in their care inspired a profound realization: “Whatever the source of a patient’s information, a physician is most effective when he or she isn’t defensive, but acts as an interpreter of information and guide of treatment, leaving the ultimate control to the patient.”15 Doctors who do not reach this conclusion may feel the effects of a changing market. Our 2003 report, “Internet Health Resources,” chronicled the way some e-patients respond to doctors who reject their online research: They leave that doctor’s practice if they can.

Half of health searches have an impact on the person’s own health care routine or the way they care for someone else. But only one in ten health seekers say the effect was major.

The impact was most deeply felt by internet users who had received a serious diagnosis or experienced a health crisis in the past year, either their own or that of someone close to them. Fourteen percent of these hard-hit health seekers say their last search had a major impact, compared with 7% of health seekers who had not received a diagnosis or dealt with a health crisis in the past year.

A study of 498 newly diagnosed cancer patients published in the March 2006 Journal of Health Communication measured the internet’s impact on people facing a health crisis.16 Patients who used the internet to gather health information were more likely than non-users to be confident about participating in treatment decisions, asking questions, and sharing feelings of concern with their doctors. However, the impact is not always positive according to a July 2006 article in The Oncologist: “[T]he risks associated with the use of the internet as an information source for and retailer of [complementary and alternative medicine], whether as preventive, curative, or palliative treatment, should be more explicitly brought to the attention of cancer patients.”17

In our survey, 53% of health seekers reported some kind of impact. This group was asked a series of follow-up questions to elucidate the information’s consequence. Since health information can have multiple effects on people’s behavior and decision-making, we allowed multiple responses.

Among the internet users who say their last search had either a major or a minor impact:

In general, few say they are harmed and many are helped by following medical advice or health information found on the internet.

These findings build on previous Pew Internet & American Life Project surveys which have found that the vast majority of health seekers say the benefits of online information outweigh the risks. In a February-March 2005 survey, we asked respondents first whether they had helped someone deal with a major illness or health condition within the past two years and, if they had, whether the internet played a crucial role, an important one, a minor role, or no role at all in this event. E-caregivers who said the internet played a crucial or important role were then asked if they got bad information or advice online that made their experience more difficult. Six percent of these respondents said yes; 91% of e-caregivers said that was not a problem for them.18

Health seekers feel mostly reassured, confident, and comforted by what they find online.

We gave respondents eight different ways – four positive and four negative – to describe how they felt during their last search for health information online. People were much more inclined to identify with the positive descriptions.  By far the most popular choice read as follows: “At any point, did you feel reassured that you could make appropriate health care decisions?” Fully 74% of health seekers said yes, that described how they felt during their last online health information session.

On the other hand: 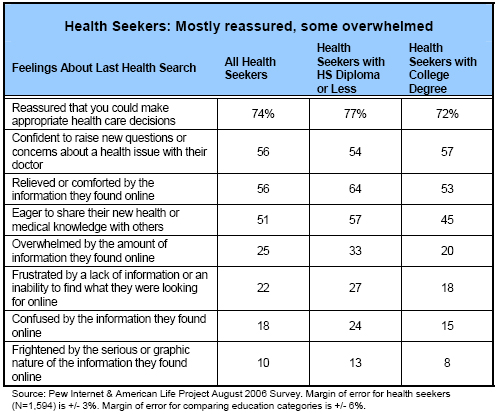 Next: Part 3. Eroding Attention to the Details of Information Quality
← Prev Page
Page1Page2Page3You are reading page4Page5Page6
Next Page →

Online Health Search 2006 Acknowledgments Part 1. 113 Million Internet Users Seek Health Information Online
Part 2. A Typical Search for Health Information
IntroductionHalf of health searches are on behalf of someone else.Two-thirds of health information queries start at a search engine.Most visit two or more sites in a typical health information session.One-third later talked to a doctor about what they found online. Two-thirds did not.Half of health searches have an impact on the person’s own health care routine or the way they care for someone else. But only one in ten health seekers say the effect was major.In general, few say they are harmed and many are helped by following medical advice or health information found on the internet.Health seekers feel mostly reassured, confident, and comforted by what they find online.
Part 3. Eroding Attention to the Details of Information Quality Methodology