Eight in ten internet users have looked online for health information – the same portion as in 2002 and 2004.

Using the internet to gather health information is an activity that has remained consistently popular with most internet users over the last seven years of polling by the Pew Internet & American Life Project and other research organizations. In addition to our surveys, national surveys by Harris Interactive and the Digital Future Project have tracked a similar trend line in the percentage of internet users who look for health information online.6 Our findings also echo a 2005 study by the Kaiser Family Foundation which found that Americans age 65 and older are the least likely age group to use the internet to gather health information.7

“Health seekers” — Internet users who search online for information on health topics, whether they are acting as consumers, caregivers, or e-patients

In our survey, 7% of health seekers, or about 8 million adults, searched for a health topic on a typical day in August 2006, which is about the frequency with which internet users are paying bills online, reading blogs, or using the internet to look up a phone number or address on a typical day. 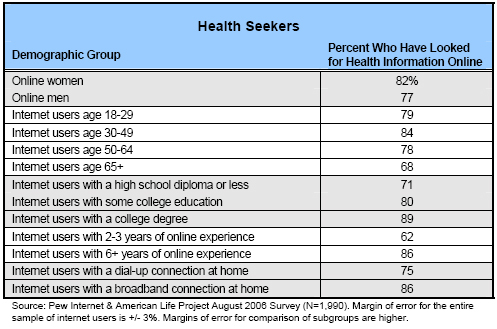 High school graduates have surged online and more internet users than ever have broadband connections at home.

At the time of this survey, August 2006, 70% of American adults say they have internet access. The percentage of high school graduates who go online has increased in the past two years, as has the percentage of internet users who have a broadband connection at home.8 The base of the internet population is broadening, as is the base of the broadband-connected health seeker population which turns first to the internet when they have a health question. 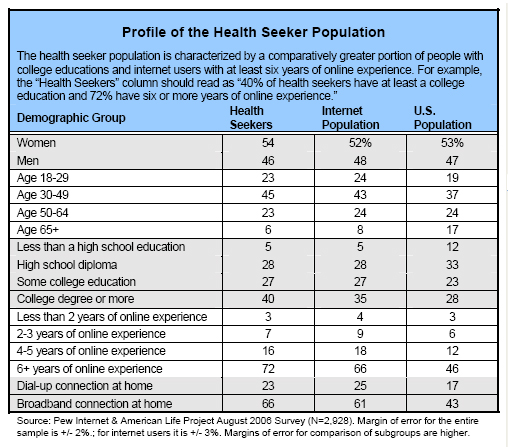 Fifteen percent of internet users have looked online for information about dental health – a new topic in our list. 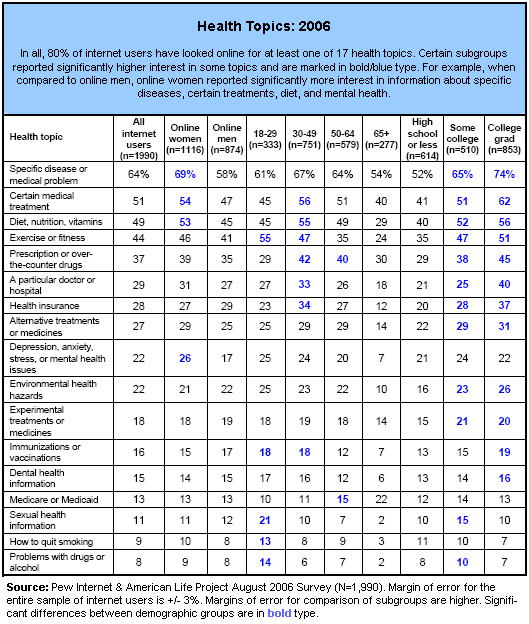 Next: Part 2. A Typical Search for Health Information
← Prev Page
Page1Page2You are reading page3Page4Page5Page6
Next Page →