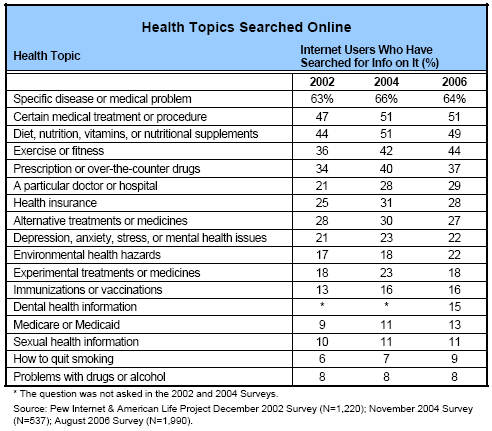 Seven percent of health seekers, or about 8 million American adults, searched for information on at least one health topic on a typical day in August 2006. This places health searches at about the same level of popularity on a typical day as paying bills online, reading blogs, or using the internet to look up a phone number or address.

The typical health information session starts at a search engine, includes multiple sites, and is undertaken on behalf of someone other than the person doing the search.

In order to capture a portrait of a typical health search, we asked respondents to think about the last time they went online for health or medical information. We found that:

Among the internet users who say their last search had any kind of impact:

Most health seekers are pleased about what they find online, but some are frustrated or confused.

We gave respondents eight different ways – four positive and four negative – to describe how they felt during their last search for health information online. People were much more inclined to identify with the positive descriptions.

On the other hand:

Three-quarters of health seekers do not consistently check the source and date of the health information they find online.

Just 15% of health seekers say they “always” check the source and date of the health information they find online, while another 10% say they do so “most of the time.” Fully three-quarters of health seekers say they check the source and date “only sometimes,” “hardly ever,” or “never,” which translates to about 85 million Americans gathering health advice online without consistently examining the quality indicators of the information they find.

These 2006 findings compare with the one-quarter of health seekers who said they always checked the source and date, one-quarter who did so most of the time, and the 50% of health seekers who said they rarely or never checked these two quality indicators in our survey in 2001. One possible reason for this diminished diligence in checking sources and dates might lie with health websites themselves: A recent study commissioned by the U.S. Department of Health and Human Services finds that just 4% of “frequently visited” health websites disclosed the source of the information on their pages and 2% disclosed how the content is updated.1