Americans say their cell phones aid them during emergencies and fill in their free time, but many also report driving unsafely while on their cells and they say they don’t like the new intrusions and public annoyances cell phones bring to their lives – not to mention their monthly bills.

The cell phone has become an integral and, for some, essential communications tool that has helped owners gain help in emergencies. Fully 74% of the Americans who own mobile phones say they have used their hand-held device in an emergency and gained valuable help.

Another striking impact of mobile technology is that Americans are using their cell phones to shift they way they spend their time. Some 41% of cell phone owners say they fill in free time when they are traveling or waiting for someone by making phone calls. And 44% say they wait to make most of their cell calls for the hours when they do not count against their “anytime” minutes in their basic calling plan.

Furthermore, 82% of all Americans and 86% of cell users report being irritated at least occasionally by loud and annoying cell users who conduct their calls in public places.

Indeed, nearly one in ten cell phone owners (8%) admit they themselves have drawn criticism or irritated stares from others when they are using their cell phones in public.

For some, the cell phone has become so central to their communications needs that they lose track of the expenses associated with their phones. Some 36% of cell owners say they have been shocked from time to time at the size of their monthly bills.

A third of cell owners (35%) already use text messaging features on their phones and another 13% would like to add that capacity to their phone.

Some 19% of cell owners say they would like to add the capacity to take still pictures to their cells.

These findings emerge in a national survey of cell phone owners by the Pew Research Center’s Pew Internet & American Life Project, the Associated Press and AOL. The findings provide a detailed picture of the role of the cell phone in modern life, including how the use of cell phones has helped people become more spontaneous and prolific in their communication patterns. Half the survey was conducted among cell phone owners on their cell phones – one of the largest such samples ever conducted.

In all, 1,503 people were surveyed between March 8 and March 28 – 752 of them on their landline phones and 751 on their cell phones. Some 1,286 cell phone users were interviewed in the sample. The overall sample and the cell-phone user sample have a margin of error of plus or minus three percentage points.

It is likely that many of the behaviors reported here will intensify in coming years as more people become attached to and reliant on their mobile phones. Indeed, 23% of those who currently have landline phones say they are very likely or somewhat likely to convert to being only cell phone users.

In this survey of adult cell users, more than a third say their cell phones have enabled some type of unwelcome intrusion in their lives.

The reasons for this become clear when cell owners describe how they use their phones: Fully 52% of all cell owners say they keep their phone on all the time and 81% of cell-only users say the device is always on.

Spam has invaded cell phones, too. About one in six cell owners (18%) report receiving unsolicited text messages on their phones from advertisers.

Asked if they had used their cells to vote in contests that had appeared on television, such as “American Idol,” 8% of cell owners said they had done that.

Cell phone users are split in how attuned they are to making calls at times when it is less expensive to do so. Some 41% say they try to place most of their phone calls when they know the minutes they use won’t cost them extra money, while 58% report they don’t concentrate the use of their phones to those off peak hours.

The cell features people use and want

Here are details about the features Americans already have on their phones and the features they would like to add: 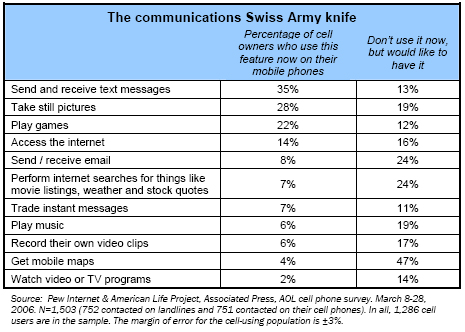 In addition, the cell phone is becoming a fashion accessory for many users. Fully 65% have taken a step to personalize the phone in some way, such as by changing the wall paper or adding ring tones to the phone.

How devoted cell owners are

The future of phone ownership

Those who have landline phones at home were asked: How likely are you to stop using your regular home phone and instead only use a cell phone? Some 8% said they were very likely to trade in their landline, and another 15% said they were somewhat likely to do so. More than half (55%) said they were not at all likely to go completely wireless with their phones.

This survey and the state of the cell phone population

The March 2006 survey with AP and AOL was designed to understand how people use their phones and profile those relying on a cell as their only phone. This survey cannot be used to estimate the size of the cell-owning population.

The most recent survey by the Pew Research Center for The People & The Press on overall cell ownership in October, 2004 showed that 66% of American adults have cell phones. This figure is undoubtedly higher today. Jupiter Research, a research firm, estimates there are 195 million cell phones in the United States.

Several recent studies have suggested that the size of the cell-only population hovers in the vicinity of 7%-9% of American adults.

Young adults engage their cells the most

It is not surprising, therefore, that the young are also the most likely to use extra cell phone features, or that they want to acquire whatever interactive media and communications capabilities are available to them.

For instance, 36% of younger cell users say they would like the option of having instant messages sent to their cells, compared with  19% of cell owners ages 30 and older who say they want this feature. If they could limit the IM forwards just to select members of their buddy lists, young cell owners would even more avidly embrace the feature: 50% say they would like that, compared with 34% of those 30 and older.

The gap between younger cell owners and others could grow in the near term. Fully 40% of landline users between the ages of 18 and 29 say they are very likely or somewhat likely to give up their landlines and go cell-only. That compares to 19% of landline owners 30 and older who are pondering a similar switch to cells. 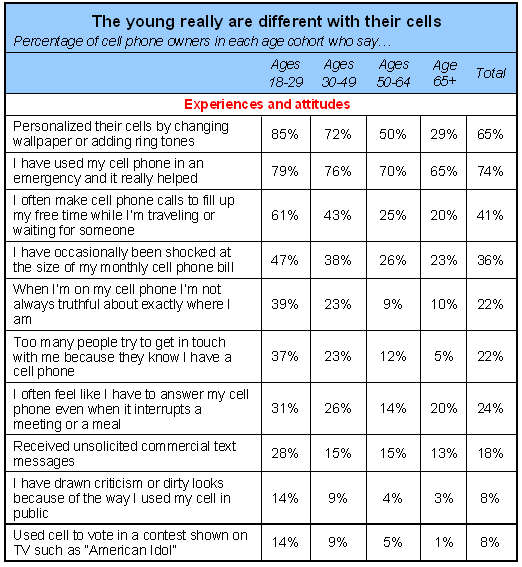 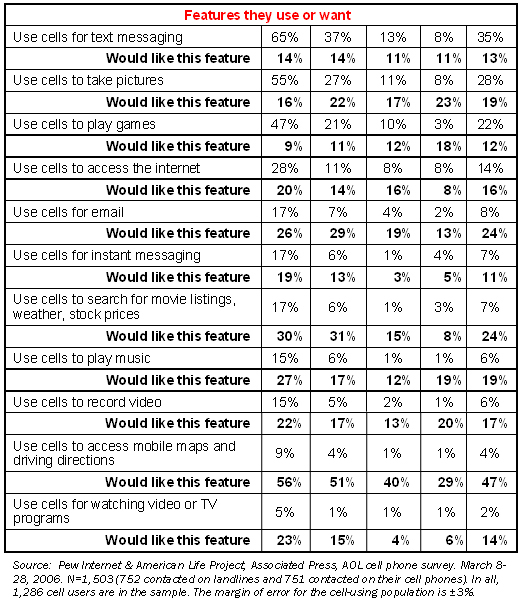 In this combined sample of landline and cell owners, we spoke to 200 people who only use cell phones.

Among respondents in our sample, this subpopulation is disproportionately male, under age 30, nonwhite, unmarried, and from households with modest amounts of income (households earning less than $30,000).

These cell-only users are strikingly different from the cell owners who also have landlines. By most measures, the phone of cell-only owners is a more valuable tool to them, it has a deeper impact on them, and it has a wider array of features. 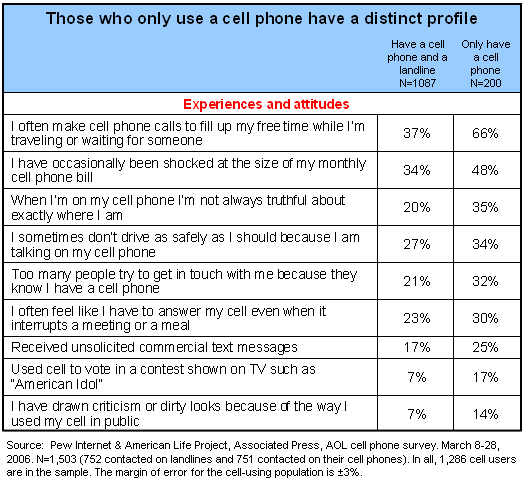 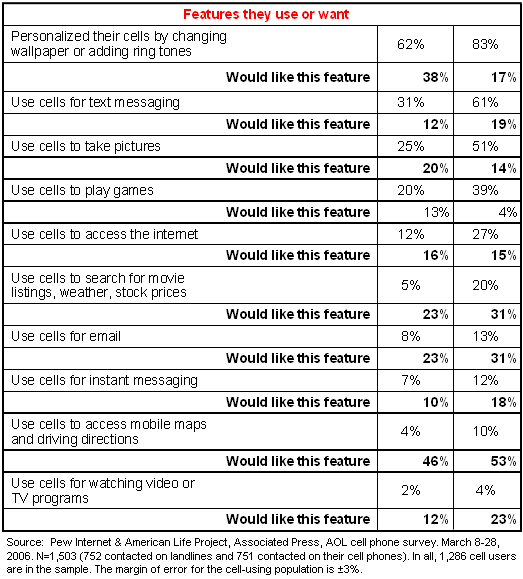 Men and women and their mobile world

There are gender-based differences among cell owners in some arenas. Men who own cells are more likely than women cell owners to say they couldn’t live without their mobile phone (34% of men report that, compared with 23% of women). On the other hand, women are more likely than men to say they have gained help from their cells in emergencies. Some other differences are highlighted in the table below. 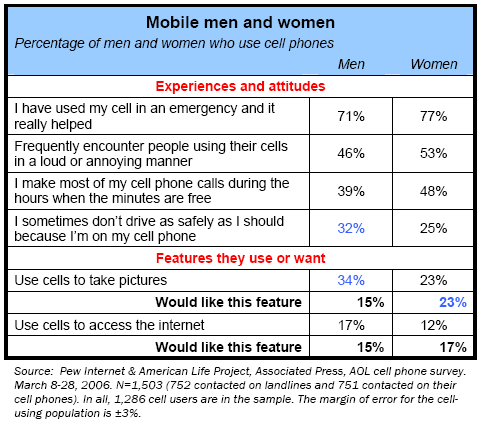 However, men and women who own cells are equally likely to send and receive text messages, to make calls to fill in their free time, to feel pressured to answer their phone whenever it rings even if it is an interruption, to be shocked on occasion at the size of the phone bill, to fake out others about where they are when they are using their cell, to have received texting spam, and to have used their cells to vote in an American Idol-type television contest.

There are some notable differences among racial and ethnic groups when it comes to things they have experienced and do with their cell phones. Nonwhites are more likely to use their cells to fill in free time with calls, to report shock at some monthly cell bills; to feel obliged to callers even when the incoming calls are interruptions; and to say too many people try to get in touch with them because they know the person has a cell phone.

A considerable amount of the difference is attributable to the Hispanic population. It is important to note that this survey was conducted in English, so the results only apply to English-speaking Hispanics and are not projectable to the overall Latino population.  In addition, the Latino population in America is relatively young, compared to other groups. Thus, at least some of the differences among ethnic groups found in this survey are linked to the age differences in the populations, rather than being attributable to the racial or ethnic background of respondents.

In their overall judgment, nonwhites are more likely than whites to say they can’t live without their cell phones: 32% of cell-owning nonwhites say that, compared with 24% of whites. 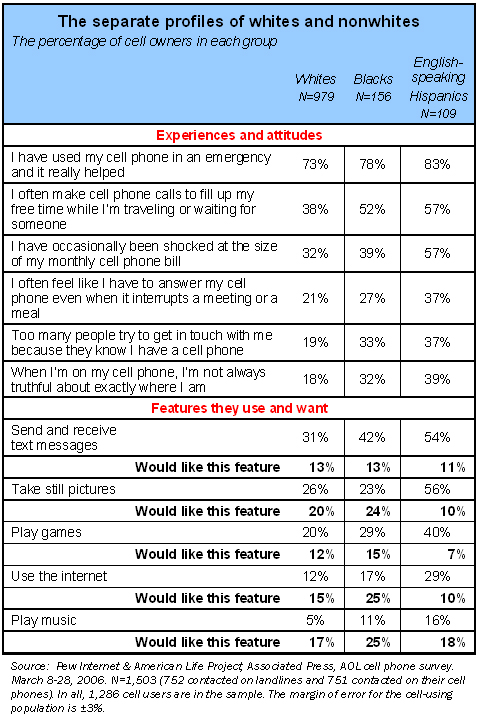 Implications of these findings

When it comes to assessing the social impact of the cell phone, this survey provides evidence that:

Americans and their cell phones
Americans say their cell phones aid them during emergencies and fill in their free time, but many also report driving unsafely while on their cells and they say they don’t like the new intrusions and public annoyances cell phones bring to their lives – not to mention their monthly bills.Other overall findings – interruptions, deception, texting spam and “American Idol”The cell features people use and wantHow devoted cell owners areThe future of phone ownershipThis survey and the state of the cell phone populationYoung adults engage their cells the mostThose who have given up their land lines and only use cell phones are a breed apartMen and women and their mobile worldRacial and ethnic differencesImplications of these findings
Methodology About Us