The Pew Internet Project has probed some of the softer issues surrounding men’s and women’s internet use. Over the years, we have asked a variety of questions about users’ awareness of internet issues and developments, and about their general interest in technology and the internet. We have asked about users’ perceived aptitude and self-confidence in dealing with computers and software, the internet and applications. We have also asked users about their attitudes toward the internet and the value it adds to their lives.

The data we have collected suggest men are more interested and aware about the world of technology and how their own systems work, from computers to internet connections. They try more new things, from hardware to software. As a natural consequence, men are more adept about dealing in the tech world, from installing filters to troubleshooting repairs. And they are more confident, in their roles as techies and geeks.

Tech terminology and issues: More men than women are familiar with tech terms and issues.

In June 2005, we asked internet users if they had a good idea of what various new technology terms means. Men reported being significantly more knowledgeable than women for every one of the following terms: spam, spyware firewall, internet cookies, adware, internet phishing, podcasting, and RSS feed.

In June 2004, significantly more men, 43%, than women, 32%, were aware of the difference between paid or sponsored and unpaid ads. 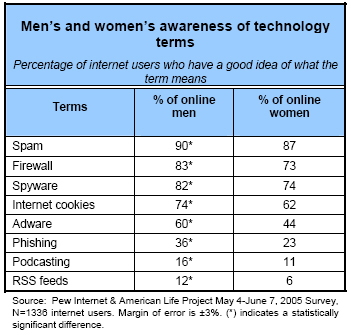 Of those who said they had virus protection on their home computers, significantly more men than women said they were responsible for setting up the protection.

Men have dealt with computer problems more thoroughly than women. In June 2005, of the two-thirds of users who said they had experienced some kind of problem with their computers in the past year, significantly more men, 44%, than women, 34%, said they knew the source of the problem and tried to fix it themselves. More women than men asked a friend or family member or colleague for help.

Men reported they were more successful at solving the problem, regardless of the manner they fixed it; 53% of men and 43% of women said the problem was solved “quickly and easily.”

In June 2003, we asked about spam filtering. More men than women who have email accounts at work said they applied their own filters to block or manage spam on them, while equal numbers of men and women said they used filters on their personal accounts.

In October 2002, significantly more women, 14%, than men, 8%,said they didn’t know if the homepage that first appeared when they fire up the computer is one provided by their ISP or computer maker. More men than women said they had changed that page for their home computers at some point.

Nearly all internet users were aware of the kind of internet connections they had at home. Significantly more men than women had some kind of high speed connections at home.

Further, women were not as interested as men in making an upgrade from slow to fast connections: Of those with dial-up connections, significantly more men than women said they were interested in getting high speed connections. 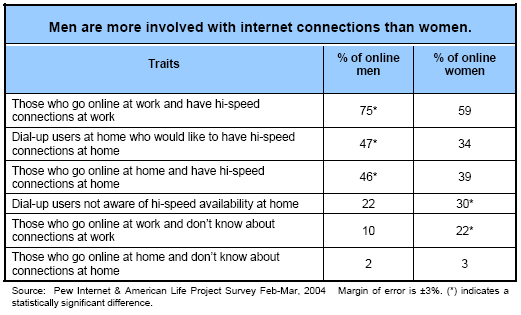 Women also knew less about the availability of high speed access in their homes: Significantly more women than men said they didn’t know if high-speed service was available or if there were multiple providers in their area.

Similarly, in November 2004, we asked if people had computer networks linking their computers together at home. Again, significantly more women, 13%, than men 4%, said they did not know. And again, more men, 54%, than women, 45%, said they did have home networks. 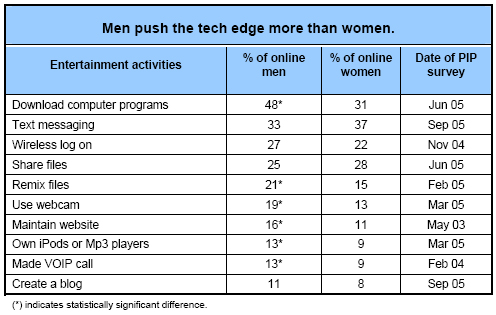 In March 2005, men were more likely than women to view live images from a webcam and to have iPods or MP3 players — although, as owners, equal numbers, 29%, have downloaded podcasts on them.

Teen girls are breaking the online mold for women.

A November 2004, survey with American teen-agers shows that the youngest female internet users are trying out the newest and more challenging online technologies as much as boys are.  Teen age girls may do more or less than boys of certain activities, like downloading, but the important message is that the technology is not standing in their way. 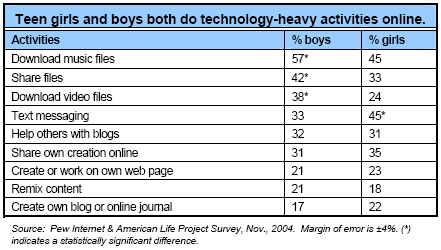 Confidence: Men have more confidence about dealing with computers and technologies than women.

In June 2005, we asked about online Americans’ confidence of keeping things like computer viruses, spyware, and adware off home computers.  Significantly more men, 22%, than women, 17%, said they were “very confident” they could do this.

In June 2004, significantly more men, 54%, than women, 40%, said they were confident in their abilities as searchers.

Those not online: Lack of interest dominates, especially among women.

In June 2005, in a variation of the earlier question, we asked non-users to identify the main reason they were not online. Similar numbers of men and women, about one third, say they are just not interested. Another third, including significantly more women, 37%, than men, 25%, cite lack of access as their main reason. The remaining third cite a variety of other reasons: the internet is too difficult or frustrating, too expensive; they are too busy; they think it’s a waste of time.

Risks and fear: Women harbor more fears about online risks and dangers than men do.

Over the years, the Pew Internet Project has asked about fears and anxieties about being online. Overall, more women than men have expressed concerns about the online environment. Women are much more concerned than men about the internet enabling crimes in general. Men and women share similar concerns over personal privacy and personal threats, although women show more concern in two particular areas:  dangers from spam and trespassing on personal health issues.

In February  2001,  women expressed much more concern than men about criminals using the internet to plan and carry out their crimes, including ones about child pornography, credit card theft, organized terrorism, destructive computer viruses, wide scale fraud, computer hacking into government and business  networks, web sites and files, and computer hacking into business networks.

In June 2003, significantly more women than men were bothered by some harms they feared might come from unsolicited emails, including possible damage to computers and concern that their privacy might have been compromised.

In June 2000, we asked about some personal concerns: About half of both men and women said they were confident that the things they did online were private and not used without their permission. They worried equally about most things:  hackers getting personal credit card information (just over 40%) and someone learning personal things from what they have done online (just over 30%); and less than 20% about downloading viruses, others tracking their web site visits, that their email would be read by unintended recipients.

In August 2000, we asked more personal privacy questions about health care in particular. Despite this being an area where women are much more active online than men, they also expressed much more concern about the risks. Women feared more than men that employers might find out about sites they were visiting, that health insurance companies might as well, and alter their policies because of it, and  that sites might sell or give away information about what they did online. And finally, when asked how they would feel if health care providers put medical records on a password protected, secure web site, 65% of women and 55% of men agreed that would be a bad thing because others might be able to access the information. 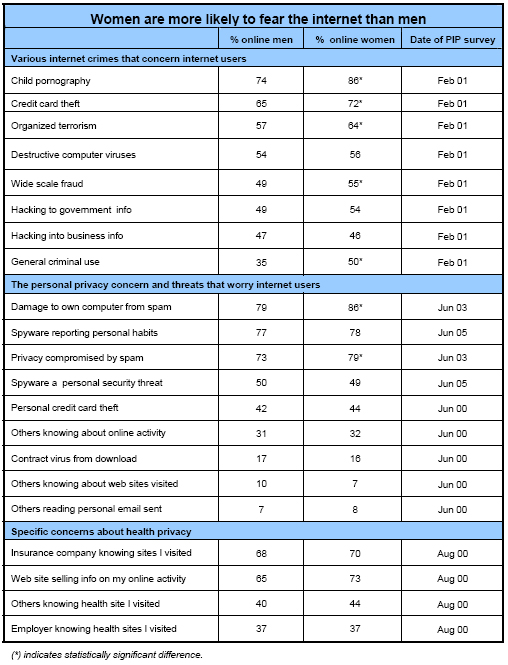 At various times, the Pew Internet Project has asked users how they feel about the internet — how and where it helps them in their lives, or what they’d miss about it if it disappeared.

In October 2002, we asked users a general question about how they liked computers and technology. In significant numbers, more men said they like them and more women said they had mixed feelings. 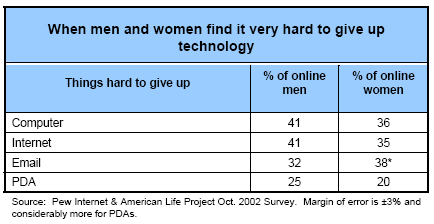 In June 2004, about a third of both men and women agree that when it comes to relying on search engines as a way of finding information, they couldn’t live without them. 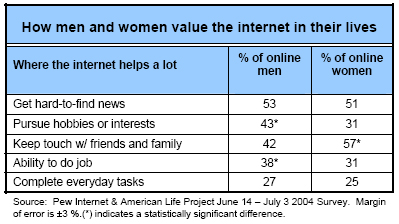 How Women and Men Use the Internet Acknowledgments Part 1. Introduction Part 2. Demographics Part 3. Patterns of Internet Use: The where, when, and how much of men’s and women’s internet use Part 4. Activities and trends: The different activities men and women do online and how their participation rates are changing do online and how their participation rates are changing. Part 5. Functions of the internet: How men and women use it as a tool to communicate, transact, get information, and entertain themselves.
Part 6. Issues about computers and the internet: Awareness, interest, attitudes, aptitude, self-confidence
IntroductionTech terminology and issues: More men than women are familiar with tech terms and issues.Software: More men take the lead on computer maintenance.Internet access: More men are knowledgeable about their internet access, and more of them either have or would like to have high speed internet access.Pushing the edge: More men than women try the new technologies.Teen girls are breaking the online mold for women.Confidence: Men have more confidence about dealing with computers and technologies than women.Those not online: Lack of interest dominates, especially among women.Risks and fear: Women harbor more fears about online risks and dangers than men do.Valuing the internet: Men and women value the internet for a few different reasons.
Methodology