Various measures of intensity of internet use suggest men are slightly more engaged with their lives online than women. Measures of overall time spent online, frequency of going online, and likelihood to go online on any given day are all stronger for men than women. More men also have fast internet access, presumably allowing them more productive time online with less waiting. 6

White men are significantly more likely to be most frequent users than most other groups. White men, 46%, use the internet at least several times a day compared with white women, 39%; to black men, 34%, or English-speaking Hispanic men, 33%. They log on more than black women, 35%, and English-speaking Hispanic women, 40%, although not significantly so.

There are no significant differences between men and women among blacks or English-speaking Hispanics for any measure of frequency.

In 2005, 89% of men and 87% of women went online from home. Further, online patterns at home mirror online patterns overall: Men log on more frequently than women, and they are more likely to go online on an average day.

In significant numbers, more men, 31%, than women, 26%, log on from home at least several times a day; more women than men log on less than daily; and on  a typical day, more men, 50%, than women 44%, were likely to go online from home.

Men and women are equally likely to log on from work.

Among those internet users who work full-time or part-time, equal numbers of men, 65%, and women, 66%, log on from work.

Among those who log on from work most often, at least several times a day, there were significantly more men, 56%, than women, 49%.  Men and women logged on from work daily in equal numbers, 19%.  More women, 31%, than men, 24%, logged on at work less often than once a day.

On a typical day, men and women who go online at work are equally likely to do so. 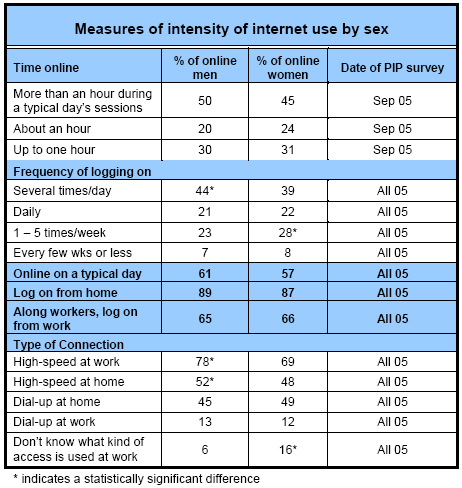 Men are more likely to have high-speed connections.

How Women and Men Use the Internet Acknowledgments Part 1. Introduction Part 2. Demographics
Part 3. Patterns of Internet Use: The where, when, and how much of men’s and women’s internet use
Overall, men spend slightly more time online and go online more frequently than women.Broadband users log on more frequently, and men more than women. White men log on more frequently than white women and non-white men.Men and women are equally likely to access the internet from home, although men do it more often. Men and women are equally likely to log on from work.Men are more likely to have high-speed connections.
Part 4. Activities and trends: The different activities men and women do online and how their participation rates are changing do online and how their participation rates are changing. Part 5. Functions of the internet: How men and women use it as a tool to communicate, transact, get information, and entertain themselves. Part 6. Issues about computers and the internet: Awareness, interest, attitudes, aptitude, self-confidence Methodology