The internet was dominated by men in its early days, but by 2000 and continuing on to today, the user population has been evenly divided between men and women. Further, the proportion of women online is nearly equal to that of men. A review of the findings of the Pew Internet & American Life surveys between March 2000 and September 2005 highlights some particularly interesting trends and correlations: Young women are more likely to be online than young men. And black women have surged online in the last three years.

Pew Internet Project surveys between January and June in 2005 show that 67% of the adult American population goes online, including 68% of men and 66% of women. But women slightly outnumber men in the internet population because they make up a greater share of the overall U.S. population.

Various measures of intensity of internet use suggest men are slightly more engaged with their internet use than women.1

Men and women are equally likely to go to the internet for a wide variety of activities, from getting travel information to doing banking to looking up phone numbers and addresses. Men go online in greater numbers than women for a vast, but scattered array of other activities. Women outpace men for a small number of activities, including the areas of health and medicine and religion.

At the same time, women are closing the gap with men. Comparing where internet users were in 2002 to where they are today:

Using the internet to communicate: More than men, women are enthusiastic online communicators and they use email in a more robust way.

More women than men send and receive email, and they use it in a richer and more engaging way. Women are more likely than men to use email to write to friends and family about a variety of topics, from sharing news and worries to planning events to forward jokes and funny stories. Men and women both appreciate email for its efficiencies and convenience, but women are more likely to feel satisfied with the role of email in their lives, especially when it comes to nurturing their relationships.

In emailers’ working life, women are more likely than men to value the positive effects of email for improving relationships, from expanding their circle of colleagues to encouraging teamwork. Women also value email for a kind of positive, water-cooler effect, which lightens the atmosphere of office life.

Men are more likely than women to participate in a big variety of interest groups, like fan clubs or community groups. Men and women both engage with such groups for the hard facts and news they learn online. Women place a higher value than men on what email does for the relationships within the group.

Using the internet for transactions: More men than women perform online transactions, although both share a rapidly growing enthusiasm for the internet’s function as a tool of commerce.

Transactions represent some of the fastest-growing online activities among men and women alike, with participation in banking more than doubling over the last five years, and doing travel arrangements, auctions, and purchasing not far behind.

Both men and women value the internet for its famous speed and efficiency in making transactions easier.

Using the internet to get information: Men pursue and consume information online more aggressively than women.

Men look for information on a wider variety of topics and issues online than women do, from researching products to buy to getting information on their hobbies to looking for political news. Sometimes, men and women look for different kinds of information. After the events of September 11, men visited more websites to tell them about things that were happening; more women said the internet helped them find people they needed to reach.

As vehicles for finding information, search engines are extremely popular among both men and women. About 90% of men and women who go online use search engines, and about 40% use them on a typical day. Men and women generally use the same kinds of search strategies, using search engines most commonly, but also starting searches on familiar, proprietary websites or following recommended links.

Although men and women say equally that they find the information online that they are looking for, men are a lot more confident in themselves as searchers, and they are less overwhelmed by the glut of information that’s out there.

Men use the web for more kinds of entertainment and recreation than women do, with just a few exceptions. Women play games as much as men, they listen to audio clips and watch video clips, and they share files. But men pursue a host of other activities with greater enthusiasm.

Issues about gender and the internet: Men are more interested in technology than women, and they are also more tech savvy. Men value the internet for the breadth of experience it offers; women value it for enriching their relationships, but they’re more concerned about its risks.

The Pew Internet Project surveys show that compared with women, men are more interested in the world of technology and how their own gadgets and systems work. Men try more new things, from hardware to software. As a natural consequence, men are more adept at dealing in the tech world, from installing filters to troubleshooting repairs. And they are more confident in their roles as techies and geeks.

Men and women share an appreciation of what the internet does for their lives, particularly in making their lives more efficient and expanding their world of information. Men seem to value these strengths most in the context of the activities of their lives, from jobs to pastimes, while women seem to value them most in the context of the relationships with family, friends, colleagues, and communities.

Men and women share concerns about personal risks and dangers from being online, from privacy concerns to credit card theft to contracting computer viruses. But women have expressed more fears than men have about the internet being a vehicle for national and worldwide problems. These include general criminal use of the internet, child pornography, organized terrorism, and hacking into government information. For online chats and discussion groups, women’s dramatic decline in participation rates coincided with increased public awareness about worrisome behavior in chat rooms. 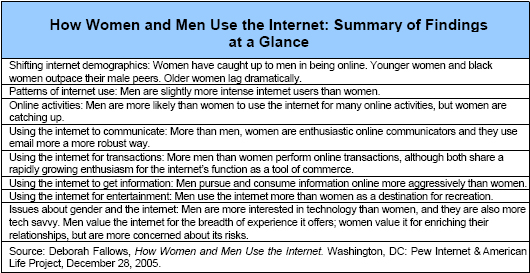