The internet was a key force in politics last year as 75 million Americans used it to get news, discuss candidates in emails, and participate directly in the political process.

The internet became an essential part of American politics in 2004.

Last year was a breakout year for the role of the internet in politics. Fully 75 million Americans – 37% of the adult population and 61% of online Americans – used the internet to get political news and information, discuss candidates and debate issues in emails, or participate directly in the political process by volunteering or giving contributions to candidates. The online political news consumer population grew dramatically from previous election years (up from 18% of the U.S. population in 2000 to 29% in 2004), and there was an increase of more than 50% between 2000 and 2004 in the number of registered voters who cited the internet as one of their primary sources of news about the presidential campaign. 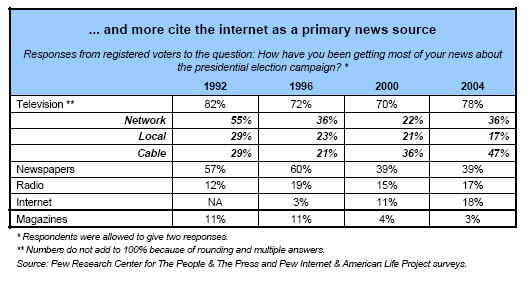 For campaign 2004, the overall figures related to uses of the internet for politics were:

Any internet user who said “yes” to one of those three questions is considered part of the online politics user community in our calculations. That came to 61% of internet users, or 75 million people. In fact, many people said “yes” to two or all three of the questions.

Many online political news consumers say the internet was important in giving them information that helped them decide their vote and that it made a difference in their voting decision.

Online Americans render a positive verdict about the overall impact of the internet on the campaign. 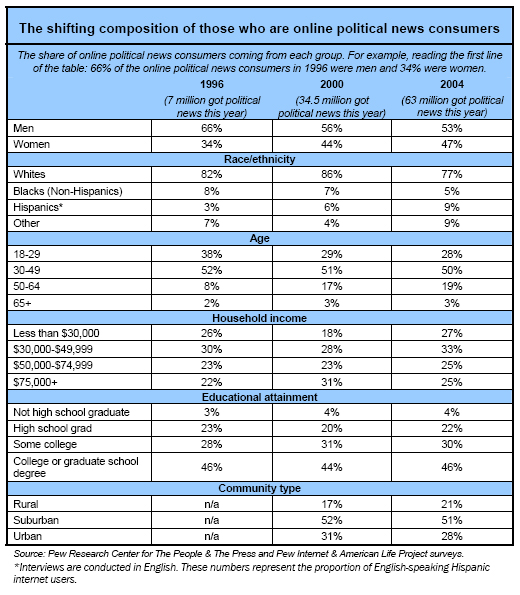 People used the internet in many ways to gather information, interact with the candidates, and chatter with fellow citizens.

Over time, the number of people using the Web and email related to politics has grown. At the same time, we have asked more questions during each election cycle about online political activities because it was clear that the number of things people were doing online related to politics was growing. The table below shows 42% growth from 2000 to 2004 in the number of people using the internet to research candidates’ issues positions; 82% growth in the number researching candidates’ voting records; 50% growth in the number taking online polls; a doubling of the number discussing politics in chat rooms and other online forums; and a doubling of those making campaign contributions online. 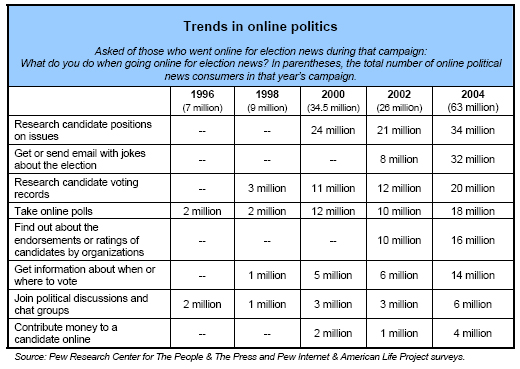 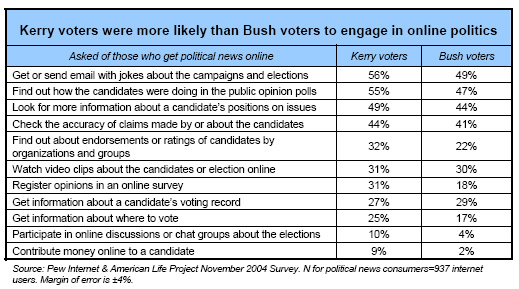 In addition, Kerry voters were more likely to use issue-oriented and political organization Web sites.

Kerry voters were more likely to say that the internet was important to them in giving them information that helped them decide their vote. Almost half of the Kerry voters (48%) who got political information online said the internet was important in providing material that helped them decide their votes, compared to 34% of Bush supporters.

Asked where they went online most often to get news and information about the campaign, the majority of internet users reported they went to sites of traditional news organizations or online services that syndicate news from traditional sources, such a wire services. These figures have hardly changed from those reported after the 2000 presidential campaign.

People cite convenience as the main reason they get political news online. However, more than half like the internet because they say they can get information online that is not available elsewhere and because they do not get all the information they need from traditional news sources.

As the online political news consumer population has grown and come to more closely reflect the entire internet-using population, the preferences and needs of this audience have changed. In the early days of online politics, when the online audience was quite elite and highly politically engaged, online news consumers liked the internet most because it provided information from non-traditional sources. As the audience has become bigger and more mainstream, internet users’ tastes have shifted towards a preference for using the internet because it is convenient. It is still the case, though, that more than half of online political news consumers say they like getting news online because it enhances or goes beyond what they feel they get from television and newspapers. 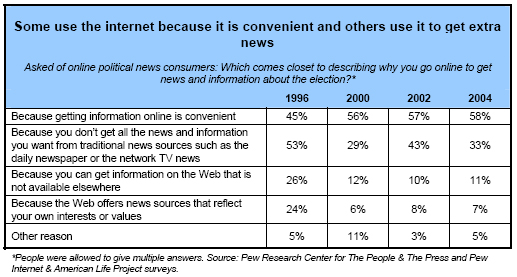 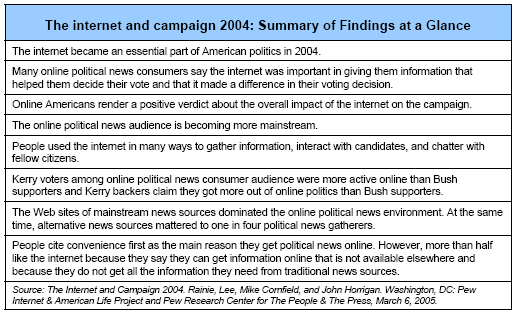 The Internet and Campaign 2004
The internet was a key force in politics last year as 75 million Americans used it to get news, discuss candidates in emails, and participate directly in the political process.
Acknowledgments Part 1. The political and media landscape in 2004 Part 2. The role of the internet in 2004 Part 3. Kerry voters, activists, and the internet Methodology