The internet users who voted for Kerry were more engaged in online activities than Bush supporters.

The differences between the camps became even more evident when particular online campaign activities were probed, as the next table shows. 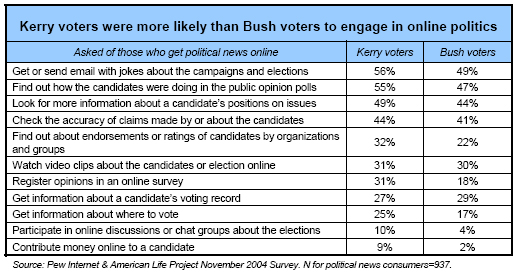 In addition to being the most active political emailers, Kerry voters were more likely than Bush voters to sign up for campaign email alerts: 12% online Kerry supporters signed up for such emails, compared with 4% of Bush voters who asked for Bush-campaign alerts.

Kerry voters outnumbered Bush voters in their use of candidate and political party sites, and they were more likely than Bush voters to use issue-oriented sites.

Just under a quarter of internet users (23%) visited at least one of the presidential candidates’ sites or the national party sites. Broken down by site, 18% of internet users visited the Kerry/Edwards site; 14% visited the Bush/Cheney site; and 14% visited the sites of either the Republican National Committee or its Democratic counterpart. When partisan preferences are taken into account, it was considerably more likely that Kerry supporters went to the Web sites of political institutions than Bush voters. Indeed, Kerry voters were almost as likely as Bush partisans to have visited the Bush Web site.

We asked survey respondents several questions about basic kinds of political activity in our survey and found that 26% of all Americans said they had participated directly in at least one campaign activity, including online activities such as donating to a candidate online. Using a more traditional definition of activism – those who did something offline to participate in a campaign – some 20% of Americans could be considered activists.

We defined campaign activist as someone who had either attended a campaign rally or donated to a political candidate or made telephone calls on behalf of a candidate or visited people’s homes to canvass for a candidate or used the internet to do campaign volunteer work. Some 20% of Americans said they had done at least one of those things.

Activists of all partisan stripes were more active online than non-activists. That’s not a tautology: the higher incidence of activists on most indicators of political internet use in our survey indicates a positive embrace of the medium for campaign learning and participation. If activists did not find the internet rewarding to use, they would have stayed with older media.

Since the emergence of the public internet a decade ago, political activists have harbored high hopes for the medium. It enables campaigners to communicate in real-time, with multiple constituencies, customizable messages, and the capacity to track responses, all at a comparatively low cost per contact and “acquisition” (i.e., a successful contact resulting in a campaign recruit, donation, or other desired response).

In 2004, presidential campaign activists found more people online available to their outreach than ever before, with the closeness of the 2000 election and the intensity of a wartime presidency providing extra motivation to them and their potential supporters.

So it is no surprise that campaign activists were more likely than non-activists to go online, get online news, create online content, create and read a blog, issue an online invitation, send and receive political email, subscribe to political e-newsletters, and visit Web sites maintained by candidates, issue groups, and political news and comment organizations.

They were also more likely to say that what they found on the internet helped them decide who to vote for (a mild surprise, since activists tend to have their minds made up well in advance), and encouraged them to vote. 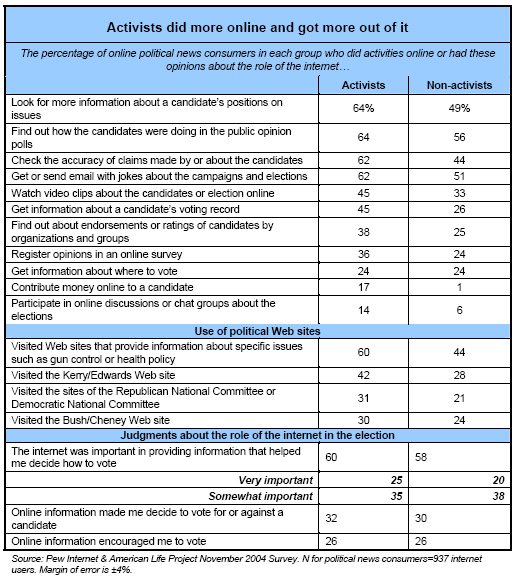 Politics OnlineDigital MediaNews SourcesNews Audience Trends and AttitudesCampaign Outreach and StrategyElection News2004 ElectionCandidate Support
Defining generations: Where Millennials end and Generation Z begins
25% in U.S. see at least some truth in conspiracy theory that COVID-19 was planned
Are you in the American middle class? Find out with our income calculator
Americans Who Mainly Get Their News on Social Media Are Less Engaged, Less Knowledgeable
Americans Fault China for Its Role in the Spread of COVID-19