Fifty-three million people, or 44% of internet users and one-quarter of all adults, now say they use online banking. Those figures amount to an increase of 47% over the number of Americans who were performing online banking in late 2002.

On a typical day online, 13 million Americans are performing banking chores online, a 58% jump from late 2002.

These latest results come from a survey done by the Pew Internet & American Life Project in late November 2004. Of all the major internet activities tracked by the Project since its inaugural survey in March 2000, online banking has grown the fastest.

Here are some of the key characteristics of online bankers:

This rise in online banking likely flows from two major trends. The first is that as internet users gain more experience online, they are more likely to perform activities that involve money, such as making online purchases and travel reservations, and participating in online auctions.

The second trend is that banks themselves have discovered the virtues of online banking and have become more aggressive in offering it as an option to customers. Various studies have found that online banking customers are more profitable than offline customers – they make fewer customer service calls and are less likely to switch banks. That means many banks are improving their online services and offering them free of charge to customers. 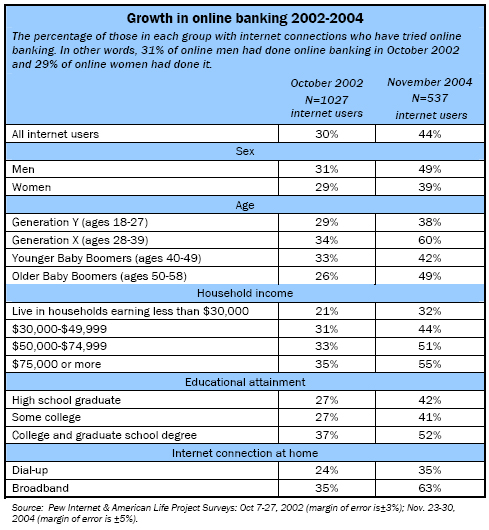 Of course, phishing (the practice of trying fraudulently to get consumer banking and credit card information) is one potential new problem for online banking. Increasing numbers of fake emails are showing up in people email inboxes, “warning” them that their account information needs to be checked or that some problem has arisen in their account. These emails then point people to Web sites where they are asked to enter their financial information. This fraud not only costs banks real dollars, but it degrades customers’ trust in the bank and in online banking in general.

The findings here come from a national telephone survey of 537 internet users conducted between November 23 and 30, 2004. The survey has a margin of error of plus or minus five percentage points.