Consumers have different views of copyright issues from musicians and artists.

The Pew Internet & American Life Project surveyed the general population on some of these same issues in a poll of 2,013 American adults conducted between November 18 and December 14, 2003.

Consumers are more likely than artists to say that the current length of copyright is too long, though almost half of consumers say that the life-of-the-artist-plus-70-years term is appropriate. Some 29% of consumers believe the term is too long, compared to 20% of all artists in the callback sample. However, artists are more likely than the general public to agree that copyright laws either “unfairly limit public access to art” or “do more to protect those who sell art than to protect the artists themselves.”

Average consumers also reported somewhat more conservative views about the legality of some well-established fair use practices when compared to artists. When asked whether or not certain activities, done without permission from the copyright holder, should be considered legal or illegal under the fair use provisions of copyright laws, the general public was more likely than artists to say that common practices, such as taping TV shows and movies or making photocopies of articles, should be considered illegal. A table comparing the answers among all the samples on similar questions can be found at the end of this section.

Still, it is true that the vast majority of both groups think that these activities should be permissible. And when asked more complex questions about burning and ripping CDs, downloading music and movies from peer-to-peer networks and making copies to sell to other people, consumers’ views lined up exactly with artists’ views. Consumers do not think people other than copyright holders should profit from the creation.

Like artists and musicians, the vast majority of consumers who download music or video files (68%) say that when they download media files for free, they usually end up supporting the artist or author in other ways, such as buying a CD or book, or going to a performance. Just over half of these downloaders (54%) say that they don’t currently pay to download any type of media files right now, but they would if the price, quality, and choice they wanted were available. 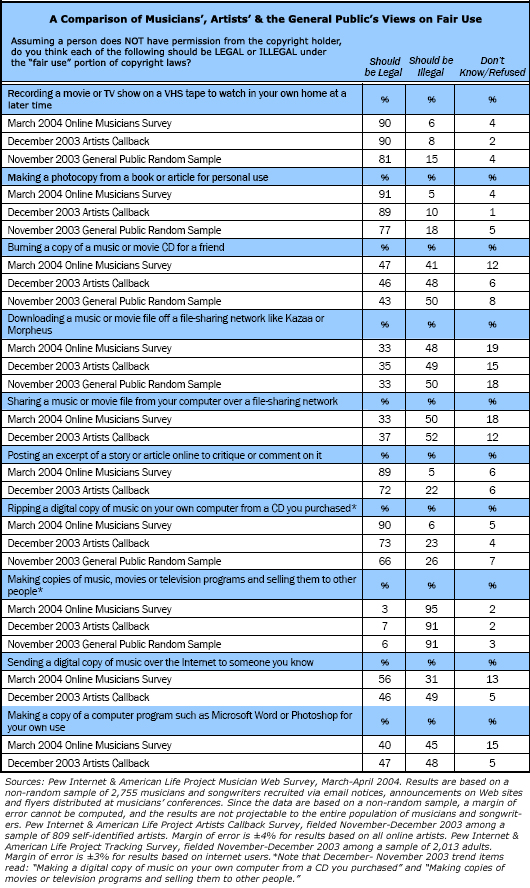