Unique surveys assess how artists and musicians use the internet, what they think about copyright issues, and how they feel about online file-sharing.

A national survey of self-described artists and an online survey of 2,755 musicians find:

Artists and musicians on all points of the spectrum from superstars to starving singers have embraced the internet as a tool to improve how they make, market, and sell their creative works. They use the internet to gain inspiration, build community with fans and fellow artists, and pursue new commercial activity.

Artists and musicians believe that unauthorized peer-to-peer file-sharing of copyrighted works should be illegal. However, the vast majority do not see online file-sharing as a big threat to creative industries. Across the board, artists and musicians are more likely to say that the internet has made it possible for them to make more money from their art than they are to say it has made it harder to protect their work from piracy or unlawful use.

In a period when thousands of lawsuits have been filed against those who are alleged to have shared files illegally and there is daily discussion about the possibility of changes in law, the Pew Internet & American Life Project undertook this work to survey a wide array of artists and musicians to hear about their views and experiences.

Three core research instruments were employed for this report: First, we conducted a random and nationally representative telephone survey of 809 American adults who said they are artists. Second, we administered a non-random online survey of 2,793 musicians, songwriters and music publishers distributed through musician membership organizations that was conducted on the Web. Our analysis focuses on 2,755 musicians and songwriters within that sample. The sample is self-selecting and not projectable onto the entire U.S. population of musicians. These online respondents are likely to be more enthusiastic about the internet and more knowledgeable about policy issues than other musicians. Still, this extensive and wide-ranging survey brings thousands of new voices from a broad range of experiences and levels of income into the debate about online file-sharing. Third, questions about copyright and file-sharing were included in a nationally-representative, random-digit-dial survey of 2,013 American adults (18 and older).

The Pew Internet & American Life Project undertook this work to gain a deeper understanding of the views of musicians and other artists and in order to bring more voices from the arts community into the national discussions about copyright and online file-sharing. Below are some of the key findings.

32 million Americans consider themselves artists and about 10 million of them get some kind of compensation for their creations and performances.

There are 32 million Americans who consider themselves artists and more than three times as many who pursue some sort of artistic endeavors in their lives, according to a survey fielded in November-December 2003 by the Pew Internet & American Life Project. The Pew Internet Project survey suggests that up to 10 million Americans earn at least some money from their performances, songs, paintings, videos, sculptures, photos or creative writing.

These are the people on the front lines in the Digital Age. Their passions, and in many cases their livelihoods, depend on public policies that encourage creativity and reward creation. They are the ones whose work is most directly affected by the technology that allows works of art to be digitized and sold online – from music to movies to books to art – and allows for easy copying and free sharing of those digitized files.

Throughout this report we refer to several groups and often focus on those who are online. “Artists” are those who described themselves as artists and were interviewed in our artist callback survey. “Paid Artists” are musicians, writers or filmmakers in our artist callback survey who get compensation for their art. “Digitized Artists” are those whose artwork (e.g. music or pictures or words) has been digitized. “Musicians” are those self-identified musical performers and songwriters who responded to our online survey (and are further divided for analysis into four subcategories in Part 3).

American artists have embraced the internet as a creative and inspiration-enhancing workspace where they can communicate, collaborate, and promote their work. They are considerably more wired than the rest of the American population.

More than three-quarters of all artists, 77%, and 83% of Paid Artists use the internet, compared to 63% of the entire population. Many site specific gains in their careers from their use of the internet.

Two-thirds of the musicians in our online survey say the internet is “very important” in helping them create and distribute their music. Fully 90% of these respondents use the internet to get ideas and inspiration; 87% use it to promote, advertise and post their music online; 83% offer free samples online and notable numbers report benefits from that such as higher CD sales, larger concert attendance, and more radio play; 77% have their own Web site; 69% sell their music somewhere online; 66% use the internet to collaborate with others. Many independent musicians, in particular, see the internet as an alternative way to bypass traditional distribution outlets.

Notable numbers of artists say the internet has been a boon to their marketing efforts.

The online musicians who responded to our survey are even more likely than the larger artistic community to use the internet to schedule and coordinate performances. Two-thirds of these respondents report that the internet has had a big effect on improving their ability to communicate with their audience and fans. Some 72% of musicians in our survey report that the internet has helped them to make more money from their music and 83% have provided free samples or previews of their work online.

For some artists, the internet has had a helpful social impact as they network with other artists, communicate with their fans, and stay in touch with loved ones and friends when they are on the road.

Artists are divided, but not deeply concerned about the file-sharing that happens online. They want control over their creations, but most do not say internet piracy is a big threat.

Artists say the current copyright laws do a good job of protecting the rights of creators and most have no qualms about the length of copyright protection that the law currently allows. Under current law, the copyright for a creative work lasts for the length of the artist’s lifetime, plus an additional 70 years.

They also are clear who benefits most from current law: Half of all artists say that copyright regulations generally benefit purveyors of art work more than the original creators. Musicians echo those views.

Still, just 28% of artists consider file-sharing to be a major threat and 30% of Paid Artists say this. Among the musicians in our online survey, two-thirds say file-sharing poses a minor threat or no threat at all.

Most musicians in our online survey, even those who make a career out of music, have not experienced problems with others posting their work online.

Artists think unauthorized peer-to-peer file-sharing should be illegal, and most would go after the companies, rather than individual file-sharers.

When asked about the Recording Industry Association of America’s lawsuits against individuals who are accused of sharing large numbers of music files online without permission from the copyright holder, close to two-thirds of all artists felt that the companies that own and operate file-sharing networks would be a better target to bear the burden of responsibility. Just 15% think that the individuals who are sharing the music files should be the ones held responsible, and 15% think both the individuals and the file-sharing companies should share the responsibility equally.

The musicians who took our online survey have somewhat different views: 37% say that both those who run the services and individuals who share files should be held culpable. Only 17% single out the online services and 15% single out individuals as the primary culprits. But most (60%) believe that the RIAA campaign will not benefit them.

In the final analysis, artists are evenly divided in their assessment about whether file-sharing programs are a net good or a net bad for their colleagues, while the musicians we surveyed are more likely to see the positive aspects of file-sharing.

Artists are split about what constitutes fair use of digital material.

Artists and the musicians we surveyed firmly agree that people should not sell copies of others’ works without permission. They also agree that copying material for private use is generally permissible. But there is much less consensus about some types of digital copying and sharing of files online. In every scenario, respondents were asked to assume that the person did not have permission from the copyright holder.

Like most internet users, online artists are also active consumers of media content online. But most who download files say if they get content for free, they usually support the artist or author in other ways.

Of those artists who download music files (n=118), most think that downloading has not really changed the total amount they spend on music purchases like CDs, concerts, or other music products (58% say this). Another 29% say they think downloading has actually increased what they spend on music purchases overall, and 13% say it has decreased their purchases. Likewise, among artists who either download music or video files (n=139), 86% say that when they download files for free, they usually end up supporting the artist or author in other ways, such as buying a CD or book or going to a performance. Just over half of all artists who download music or video files say they can’t always tell if it’s legal or illegal to download media files from the internet. More than two-thirds of the sample said they don’t currently pay to download any type of media files, but they would if the price, quality and choice they want become available. 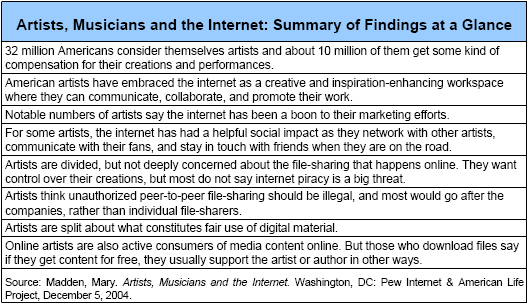 Next: Acknowledgments
← Prev Page
You are reading page1Page2Page3Page4Page5Page6Page7
Next Page →

Artists, Musicians and the Internet
Unique surveys assess how artists and musicians use the internet, what they think about copyright issues, and how they feel about online file-sharing.
Acknowledgments Part 1. Introduction Part 2. Findings from the artist callback survey Part 3. The musicians survey Part 4. What the general public believes Methodology