The RIAA lawsuits against online music file sharers appear to have had a devastating impact on the number of those engaging in Internet peer-to-peer music sharing; Students and broadband users show large drops in downloading

The percentage of online Americans downloading music files on the Internet has dropped by half and the numbers who are downloading files on any given day have plunged since the Recording Industry Association of America (RIAA) began filing suits in September against those suspected of copyright infringement. Furthermore, a fifth of those who say they continue to download or share files online say they are doing so less often because of the suits.

A new nationwide phone survey of 1,358 Internet users from November 18-December 14 by the Pew Internet & American Life Project showed that the percentage of music file downloaders had fallen to 14% (about 18 million users) from 29% (about 35 million) when the Project last reported on downloading from a survey conducted during March 12-19 and April 29-May 20. On an average day during the spring survey, 4% of Internet users said they downloaded files. In the November-December survey just 1% said they were downloading files on any given day during the survey period.

Data from comScore Media Metrix, based on the company’s continuously measured consumer panel, show significant declines in the number of people with peer-to-peer file sharing applications running on their computers.  In fact, comScore found that usage of each of the four applications sampled – KaZaa, WinMX, BearShare and Grokster – dropped in November versus one year ago. The declines in the user base of each of these applications from November 2002 to November 2003 were: 15% for KaZaa, 25% for WinMX, 9% for BearShare, and 59% for Grokster. 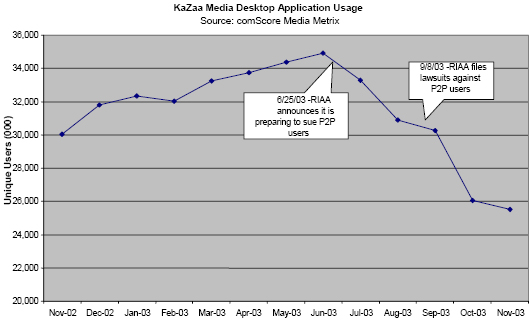 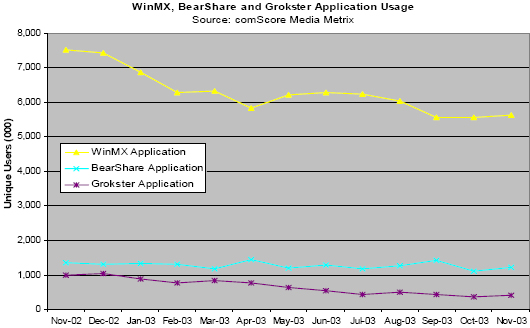 Conversely, comScore has observed that in recent months a growing number of consumers have turned to a new generation of paid online music services.  In November 2003, 3.2 million Americans visited Napster.com, which re-launched as a paid online music service in late October.  Apple’s iTunes, which expanded to serve Windows-based PC users in mid-October, drew 2.7 million such visitors in November.

Furthermore, in the Pew Internet Project survey, the percentage of Internet users who say they share files such as music, video, picture files or computer games with others online dropped from 28% in a June 2003 survey to 20% in the November-December survey. Compared to music downloading, the drop in those who say they share music or other types of media files was less pronounced. This may reflect the large amount of media attention focused on the recording industry’s attempts specifically to curb music downloading and sharing, while efforts to target those who circulate copyrighted images or programs have been less visible. Additionally, there may be a fraction of Internet users who are simply less likely to admit to either downloading music or sharing files due to the negative media portrayal of the activity.

While multiple factors may have contributed to the decline, every nook of the music downloading world has been affected, including the parts of the population that were the most prolific users of online file-sharing networks. Steep drops in downloading were recorded among students, broadband users, young adults (those ages 18-29) and Internet veterans. The groups that recorded the steepest plunges in the percentage of downloaders were women (58% decrease in the size of the downloading population), those with some college education (61% decrease) and parents with children living at home (58% decrease). The survey was conducted among those 18 and older. 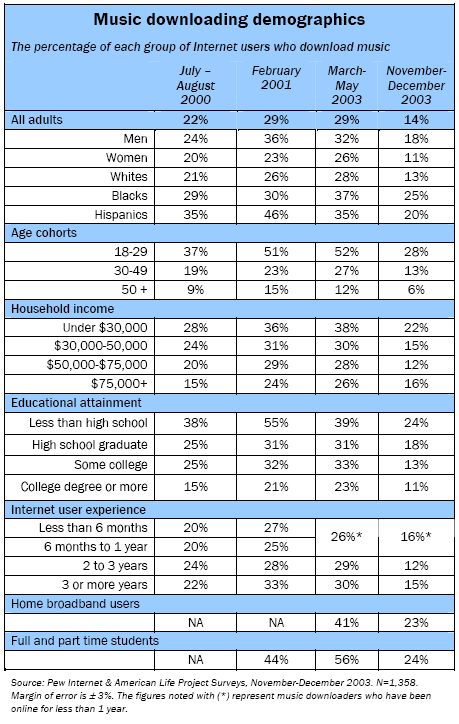 In January 2003, the RIAA won a landmark case against Verizon, forcing the company, under the provisions of the 1998 Digital Millennium Copyright Act (DMCA), to release the names of subscribers who were suspected of copyright infringement. Verizon appealed the ruling, citing customer privacy concerns and the lack of court oversight required for the subpoena process. A federal appeals court upheld the ruling in June 2003 and that paved the way for the recording industry and other copyright holders to expedite the process of suing and making settlements with individuals believed to be infringing on copyright protections.

The first wave of RIAA subpoenas was sent to Internet Service Providers in July 2003, seeking to have the ISPs identify and contact customers who were potential copyright infringers. Since then, the RIAA has filed 382 lawsuits (261 in September, plus 80 in October, plus 41 others in December) for “egregious” copyright infringement, which the music trade group defines as distributing 1,000 or more “copyrighted music files for millions of strangers on the Internet to copy for free.” The law allows copyright holders to collect up to $150,000 per violation, and some of the targets of the suit quickly settled their cases for amounts reportedly ranging from $2,500 to $10,000.

However, legal challenges to the RIAA suits are still being mounted. One New York woman, known only by her screen name of “NYCfashiongirl” is contesting the RIAA subpoena to her ISP as a possible violation of state and federal laws designed to protect her privacy. Another anonymous user, a college student in North Carolina, has requested that a federal judge block the subpoena that would force his university to reveal his identity.

Most recently, on December 19, the previous Verizon ruling regarding the ISP subpoena process was overturned. The D.C. Circuit Court dismissed the previously issued subpoenas, arguing that they are not authorized under the language of the DMCA because Verizon was not storing infringing material on its network. The new ruling will impact the way the recording industry and other copyright owners pursue Internet users suspected of copyright infringement, forcing them to file lawsuits against anonymous “John Doe” defendants and acquire subpoenas from a judge in order to learn the names and addresses of file sharers.

The Pew Internet & American Life Project is a non-profit initiative, fully-funded by The Pew Charitable Trusts to explore the impact of the Internet on children, families, communities, health care, schools, the work place, and civic/political life. The Project is non-partisan and does not advocate for any policy outcomes. For more information, please visit our Web site: https://www.pewresearch.org/internet/.

The RIAA lawsuits against online music file sharers appear to have had a devastating impact on the number of those engaging in Internet peer-to-peer music sharing; Students and broadband users show large drops in downloading File Sharing Application Usage Internet users with these applications actively running in a given month (000)