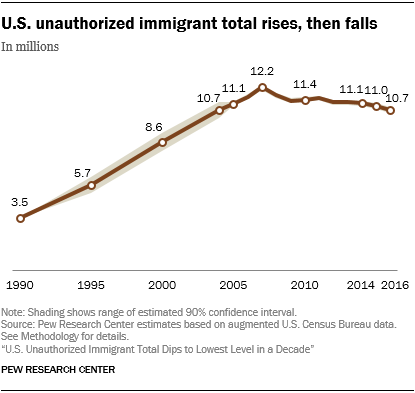 The number of unauthorized immigrants rose sharply in the 1990s and reached 12.2 million in 2007, as the recession began. It declined through the end of the recession in 2009, then stabilized until ticking down in 2015. The 2016 total represents a further decline and is the lowest since 2004, when it was 10.7 million. Still, the total is about triple what it was in 1990 and nearly double the 5.7 million in 1995. 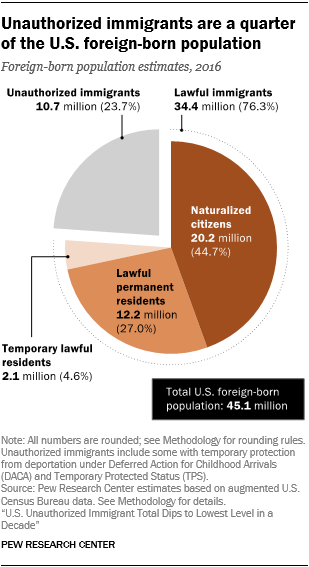 Compared with 2007, unauthorized immigrants are a smaller share of the U.S. foreign-born population, which numbered 45.1 million in 2016. Meanwhile, the share of legal immigrants has risen. Unauthorized immigrants were 24% of the total foreign born in 2016, compared with 30% in 2007. Naturalized citizens accounted for 45%, up from 38% in 2007. Lawful permanent residents – that is, immigrants with green cards who have not become citizens – constituted 27% of the foreign born in 2016, about the same as in 2007, when they were 28%.

Temporary lawful residents – mainly students and temporary workers – were 5% of the foreign-born population in 2016, compared with 4% in 2007. 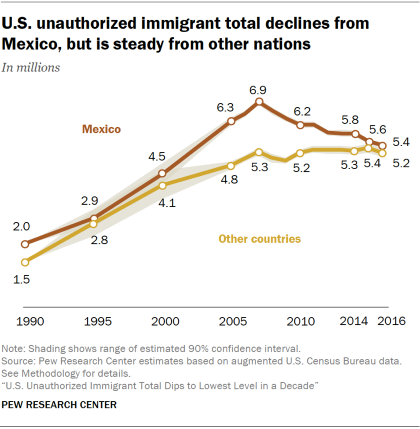 The number of unauthorized immigrants grew from 2007 to 2016 from only one group of nations: Central America. Fueled mainly by immigrants from the Northern Triangle nations of El Salvador, Guatemala and Honduras, the total from Central America rose by 375,000 during that period.

According to Mexican government survey data, most returnees said they left the U.S. of their own accord, and the majority cited family reunification as the main reason for going to Mexico. However, 14% said they came back because they were deported.

According to new additional analysis of the Mexican government statistics on return migrants, the overwhelming majority (72%) were male and most (77%) were in the prime working ages of 15 to 59, which is in accord with the decline in male, working-age unauthorized immigrants in Center estimates. Among return migrants who had lived in the U.S. one or five years earlier but were back in Mexico in 2014, nearly three-quarters were men. People ages 15 to 59 accounted for more than three-quarters of returnees.

Mexicans are a shrinking share of those apprehended at the border 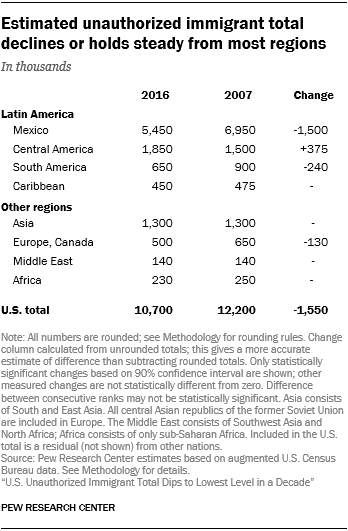 The total also went down over the 2007 to 2016 period for unauthorized immigrants from South America and the combined region of Europe and Canada. The remaining regions (the Caribbean, Asia, Middle East-North Africa, sub-Saharan Africa, and the rest of the world) did not have statistically significant change over that era. Central America was the only region that grew.

The race and ethnicity of unauthorized immigrants generally reflect their national origins. About three-quarters (74%) were Hispanic in 2016. Among non-Hispanics, 12% were Asian, 7% white and 5% black, while the rest were of multiple races or other races.

As Mexican numbers decline, those from other large birth nations grow

Among individual nations with the 20 largest unauthorized immigrant populations in the U.S., there were statistically significant increases between 2007 and 2016 from the three Northern Triangle nations, India and Venezuela. Decreases occurred not only from Mexico, but also from Brazil, Colombia, Ecuador, Korea, Nicaragua and Peru.

Other regions or nations may have had changes, but that cannot be stated with certainty because of the margin of error in the data.

Next: 2. Unauthorized immigrants are more likely to be long-term residents
← Prev Page
Page1You are reading page2Page3Page4Page5Page6Page7Page8Page9Page10Page11
Next Page →

Number of U.S.-born babies with unauthorized immigrant parents has fallen since 2007