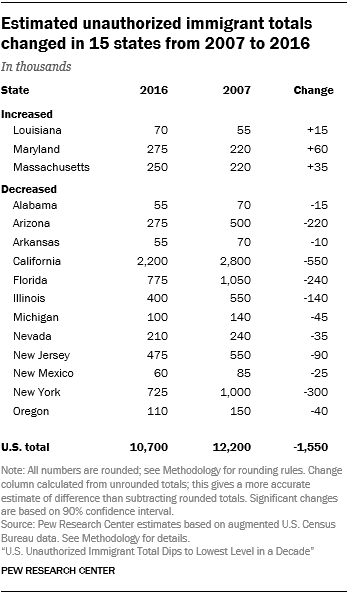 From 2007 to 2016, the estimated unauthorized immigrant population declined in a dozen states and rose in three. Other states may have undergone changes, but that cannot be determined definitively because of the margin of error in the data.

Other states with losses from 2007 to 2016 were Alabama, Arkansas, Michigan, Nevada, New Mexico and Oregon. 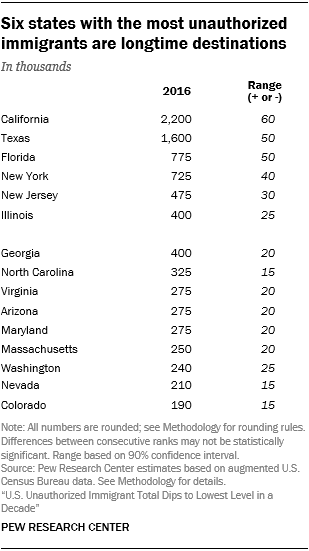 For a table showing unauthorized immigrant populations for selected years in all states, not just those with statistically significant changes, see Appendix C.

Only three states had increases in their unauthorized immigrant populations since 2007. Unauthorized immigrant populations grew in Maryland (where the three Northern Triangle nations are the largest birth countries), Massachusetts (where El Salvador is the top birth country) and Louisiana (where Mexico, Honduras and Guatemala are the top birth countries), in contrast to the national decrease. The total in Massachusetts also rose from 2015 to 2016.

Twelve states experienced statistically significant declines in the size of their unauthorized immigrant workforces from 2007 to 2016, while eight states had increases. 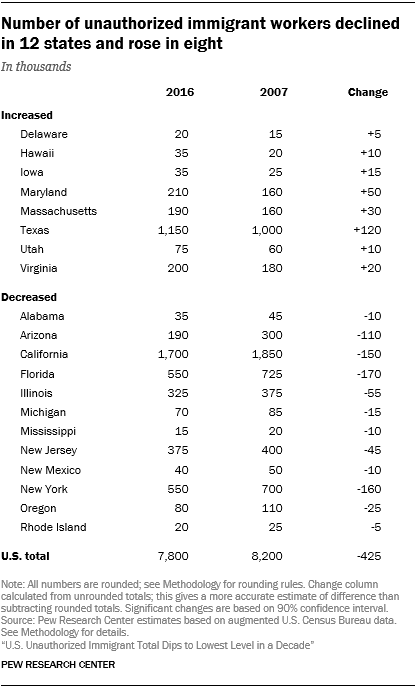 For a table listing the workforce totals for all states, not just those with statistically significant changes, see Appendix C.

Next: Acknowledgments
← Prev Page
Page1Page2Page3Page4Page5You are reading page6Page7Page8Page9Page10Page11
Next Page →