Worldwide, more than eight-in-ten migrants born in El Salvador, Guatemala and Honduras live in the United States, according to United Nations estimates. That included 89% of Salvadoran migrants, 86% of Guatemalans and 82% of Hondurans in 2015. 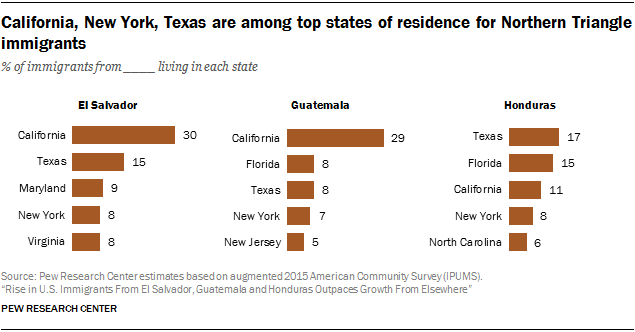 However, several states that are not among the top 10 destinations for immigrants are popular with those from Northern Triangle countries. They include Maryland for immigrants from all three countries, North Carolina for Guatemalans and Hondurans, Nevada for Salvadorans and Louisiana for Hondurans.

Immigrants from the three countries also are most likely to live in metro areas that are popular destinations for other immigrants, according to 2015 census data.

Most Northern Triangle immigrants have lived in the U.S. a decade or more 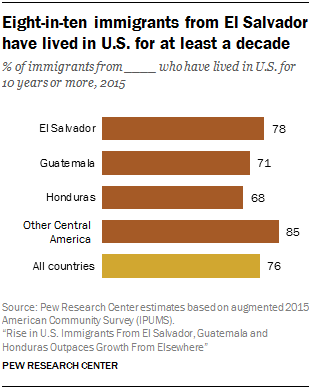 Despite the large number of immigrants who arrived in the past decade, most immigrants from El Salvador, Guatemala and Honduras have lived in the U.S. for 10 years or more, as is true for the majority of all U.S. immigrants.

Guatemala is the only Northern Triangle country from which there are substantially more men (59% in 2015) than women (41%) among U.S. immigrants. The shares are nearly equal for Salvadorans and Hondurans, as they are for U.S. immigrants overall. However, there is gender imbalance in the other direction among other Central American immigrants; this group is 56% female. Among all U.S. immigrants, 50% are female.

Among women ages 18 to 64, labor force participation varies by birth country, but it is lower than for all U.S.-born women. Linked to their lower labor force participation is their greater likelihood to have young children at home. Northern Triangle immigrants are at least twice as likely as U.S.-born women to have young children at home. 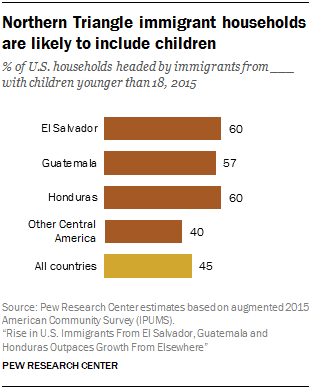 A single-person household – someone living alone – is relatively uncommon for Central American immigrants, especially those from the Northern Triangle. Among Salvadoran immigrants, 9% lived alone in 2015, compared with 12% for Guatemalan immigrants and 14% for Honduran immigrants. Among all immigrants, 19% did. Among all the U.S. born, 30% did.

According to other census data for individuals (not households), about four-in-ten immigrant adults from the three Northern Triangle nations live with minor children. The vast majority of those immigrant adults – about nine-in-ten – live with U.S.-born children, who are U.S. citizens at birth. 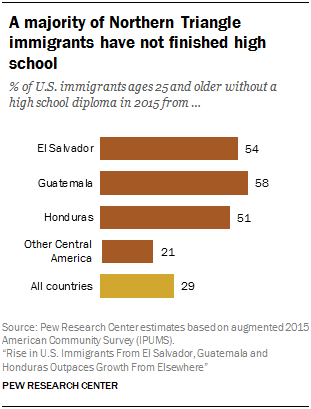 The educational attainment of the immigrant population from Northern Triangle nations is below that of all U.S. immigrants. Among those ages 25 and older, half or more from each country have not completed high school, compared with 29% of all immigrants, according to 2015 U.S. Census Bureau data. Most of those who have not finished high school have less than a ninth grade education; fully 39% of Northern Triangle immigrants had this level of schooling in 2015.

Among Northern Triangle immigrants in 2015, 27% had a high school diploma or GED equivalent and no further education, 11% had some college education or a two-year degree and 7% had a bachelor’s degree or more. The comparable shares for the foreign-born population overall in 2015 were 26%, 15% and 30%.

In looking at educational attainment, legal status matters: Most Northern Triangle unauthorized immigrants have not completed high school (60%), compared with 48% of lawful immigrants from the region.

Educational attainment is notably higher among U.S.-born residents with roots in the three Central American nations. In that group, the vast majority has a college degree (24% in 2015), some college (30%) or a high school education (30%). Only 16% did not complete high school.

Most Northern Triangle immigrants are not proficient in English

Immigrants from El Salvador, Guatemala and Honduras are less likely than other foreign-born residents of the U.S. to be proficient in English. English proficiency is defined as either speaking only English at home or, if someone speaks another language at home, that person speaks English very well.

In 2015, half of U.S. immigrants ages 5 and older (51%) were proficient in English, compared with almost a third of those from the Northern Triangle. 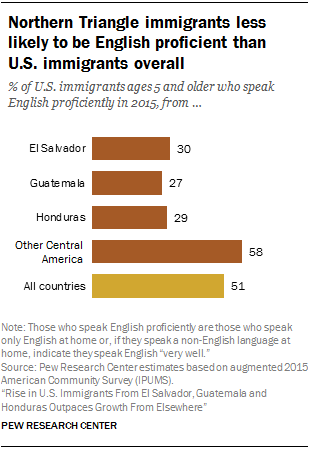 Next: Acknowledgments
← Prev Page
Page1Page2You are reading page3Page4Page5Page6Page7
Next Page →