The first 14 years of the new century have been marked by the continued growth and dispersion of the U.S. Latino population outside of counties with historically large Latino populations. But since the onset of the Great Recession in 2007, both have slowed 4 as immigration from Latin America and Latino fertility rates declined.

Growth in the number of counties with at least 1,000 Hispanics

However, national Hispanic population growth began to cool after the start of the Great Recession as Hispanic immigration to the U.S. slowed and Hispanic fertility rates declined. As a result, between 2007 and 2014, the share of counties with at least 1,000 Hispanics grew by just 4 percentage points, to 50% of the nation’s counties.

Since 1990, Latinos have increasingly settled in counties outside the largest U.S. metropolitan areas such as Los Angeles, Houston, New York City or Miami, all of which also have some of the country’s largest Latino populations. In 2014, nearly half (44%) of counties with at least 1,000 Hispanics were non-metropolitan – up from 34% in 1990.

A declining share of Latinos live in counties that had more than 50,000 Latinos in 1990

Since 2007, Latino growth is less concentrated in counties where the Latino population has grown by at least 10,000

Hispanics are more evenly dispersed across U.S. counties in 2014 than previously, but their dispersion has slowed since 2007

One broad overall measure of dispersion is the dissimilarity index. This measure ranges in value from 0 to 100 and provides a single summary metric that measures dispersion. It does this by showing what percentage of Hispanics would need to move in order to have the proportion of Hispanics in each county equal the proportion of Hispanics in the nation’s population. A dissimilarity index value of zero would indicate that Hispanics are evenly distributed across U.S. countries, while an index of 100 would indicate complete segregation of the U.S. Hispanic population from non-Hispanics.

From 2000 to 2007, the dissimilarity index fell again, to 48 in 2007, indicating the continued dispersion of the U.S. Hispanic population across the nation’s counties. The index also declined from 2007 to 2014, but only by 2 points, reaching 46 in 2014. This means in 2014, 46% of Hispanics would need to move to have the same proportion of Hispanics in each county as the proportion of Hispanics in the national population. Yet while this measure indicates that Hispanics continued to move to counties where there were fewer Hispanics after the onset of the Great Recession, dispersion was slower than it had been from 2000 to 2007.

Though Hispanic population growth has been largely centered in the Southern and Western regions of the U.S., since 2007 counties in the Northeast have made up a rising share of this growth. As the Northeast made up a larger portion of the nation’s Hispanic population growth between 2007 and 2014, there was a slight decline for all of the other regions of the U.S. compared with the seven years prior. 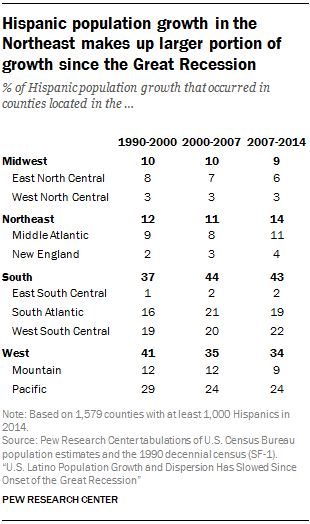 Between 2007 and 2014, 14% of the nation’s Hispanic population growth occurred in Northeast counties – up from 11% between 2000 and 2007. Between 1990 and 2000, 12% of Hispanic growth occurred in the Northeast. Counties located in the Middle Atlantic division accounted for a larger portion of this rising share than counties located in New England. In fact, 11% of Hispanic population growth between 2007 and 2014 was in counties in the Middle Atlantic division, compared with 4% in the New England division. 6

Counties in the Midwest made up a slightly declining share of Hispanic population growth since 2000, but this was largely driven by small declines in the East North Central division, which includes counties in Illinois, Indiana, Michigan, Ohio and Wisconsin. Between 1990 and 2000, and again between 2000 and 2007, counties in the Midwest accounted for 10% of the Hispanic population growth. This share declined to 9% during the period between 2007 and 2014.