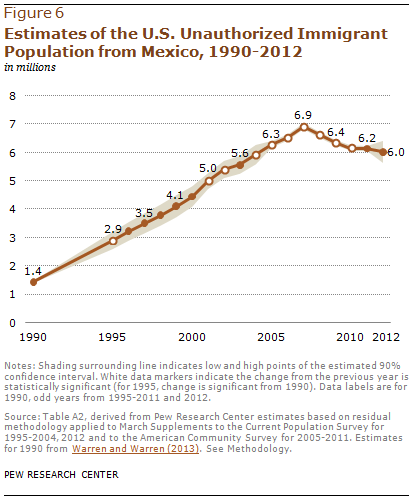 Most of the U.S. unauthorized population comes from Mexico—52% in 2012. The number of Mexican-origin unauthorized immigrants in 2012 was lower than it was in 2007, while the number from other countries is statistically unchanged.

The unauthorized Mexican immigrant population grew dramatically through 2007, reaching a peak of 6.9 million, or almost five times the number in 1990 (1.4 million). The growth trend reversed abruptly after 2007, as the population of unauthorized Mexican immigrants declined in 2008, 2009 and 2010 from the previous year. It did not rise or fall in 2011.

The number of unauthorized immigrants from all other countries also grew steadily through 2007 to 5.25 million, compared with 2.05 million in 1990. This group declined in 2008, held steady in 2009, and rose in 2010 compared with the previous year. The 2011 total was unchanged from 2010 but higher than it had been in 2009. The total for 2012 (5.65 million) appears to be higher than the 2007 peak but because of the large margin of error, this cannot be confirmed with the preliminary estimates. 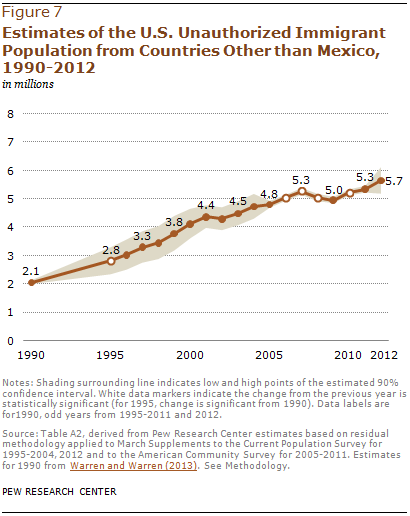 The steady growth until recently of the unauthorized population (from Mexico and all other countries) resulted from significantly larger numbers of arrivals than departures. Since 2007, there is evidence from the U.S. data (both ACS and CPS) as well as from other sources of dramatic reductions in arrivals of new unauthorized immigrants.

However, these reductions in arrivals alone are insufficient to explain the large population declines for unauthorized immigrants from Mexico. Previous Pew Research analysis of Mexico-U.S. migration found that migration to Mexico over the 2005-2010 period roughly balanced the flows into the U.S.—something that had not happened since the 1930s (Passel, Cohn and Gonzalez-Barrera, 2012). Viewing these new estimates for Mexican unauthorized immigrants in the context of that previous research suggests that the return flow of unauthorized Mexican immigrants for 2007-2009 was significantly larger than the flow from Mexico into the U.S.

Departures to Mexico in 2007-2009 also were larger than in the years immediately before and after that period, as evidenced in data from the Mexican census of 2010 and Mexican surveys from 2006 and 2009. This increased return represents a marked change in pattern from the largest immigration wave in U.S. history.

Several other data sources also provide evidence of reduced arrivals of new Mexican immigrants, especially unauthorized immigrants. U.S. Customs and Border Patrol apprehensions of Mexicans attempting to enter the U.S. illegally across the southern border help to explain some of the trends in the unauthorized Mexican population. While the apprehensions do not themselves measure the number of illegal border crossers, they are an indicator of changing flows (Passel, Cohn and Gonzalez-Barrera, 2012).

Other evidence to help explain trends in unauthorized immigration from Mexico comes from Mexican government surveys. The ENOE (Encuesta Nacional de Ocupación y Empleo, or National Survey of Occupations and Employment) shows that the rate of migration to the U.S fell by two-thirds between 2006-2007 and 2011-2012 (INEGI, 2013). Initial data for 2012 show no change from 2011. These greatly reduced inflows to the U.S. can help explain the decreasing unauthorized Mexican population and its leveling off after 2010. 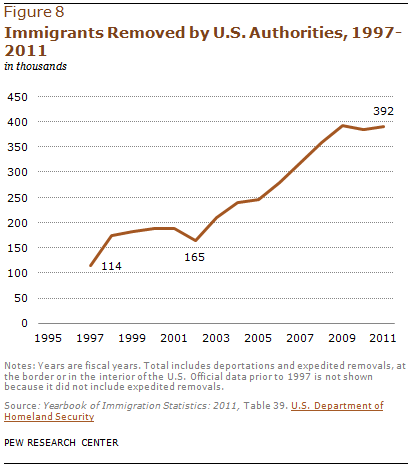 Another indicator of border activity is deportations (officially called “removals”) by the Department of Homeland Security. In fiscal 2011, DHS formally removed 392,000 unauthorized immigrants and other legal immigrants who violated U.S. laws, about the same number as in 2009 and 2010. Before that, except for a one-year decline in fiscal 2002, the number of deportations had risen each year since the late 1990s.

Next: References
← Prev Page
Page1Page2Page3You are reading page4Page5Page6Page7
Next Page →