In 2012, the population of 11.7 million unauthorized immigrants was half a million people smaller than it had been in 2007, when the Great Recession began. (The recession officially ended in June 2009.)

As explained above, the estimates are not exact because they are derived from Census Bureau sample surveys, rather than complete counts. Each annual estimate actually is the middle point of a range of possible values. One approximate indicator is that if the annual ranges overlap—as they do for 2010 and 2012, and for 2011 and 2012—apparent differences may not be real. (See Methodology for more detail.)

Despite recent declines, the unauthorized immigrant population in 2012 was about three times what it had been in 1990, when an estimated 3.5 million foreign born residents lived in
the U.S. without legal authorization. By 1995, that number grew to 5.7 million. By 2005, the 1995 total had nearly doubled, to 11.1 million. 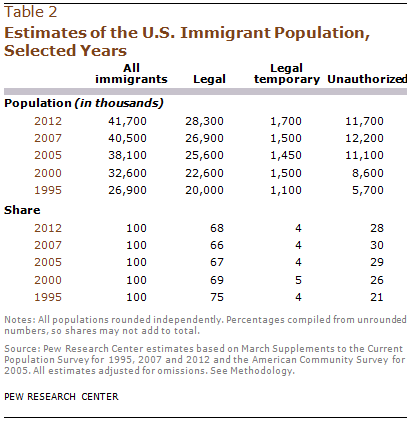