Among Latino adults, half (49%) say they own a smartphone. Overall, smartphone ownership rates are similar to those of whites (46%) and blacks (50%).

Among Hispanics, Who Owns a Smartphone?

Latinos with annual family incomes of $50,000 or more are the most likely to own a smartphone. On the other hand, Latinos ages 65 and older are the least likely to be smartphone owners.

Educational attainment is also correlated with smartphone ownership. About seven-in-ten (68%) Latinos with some college education or more say they own a smartphone. This compares with 45% of those who have completed high school and 32% of those without a high school diploma.

Native-born Latinos are 21 percentage points more likely to say they own a smartphone, compared with foreign-born Latinos—61% vs. 40%. 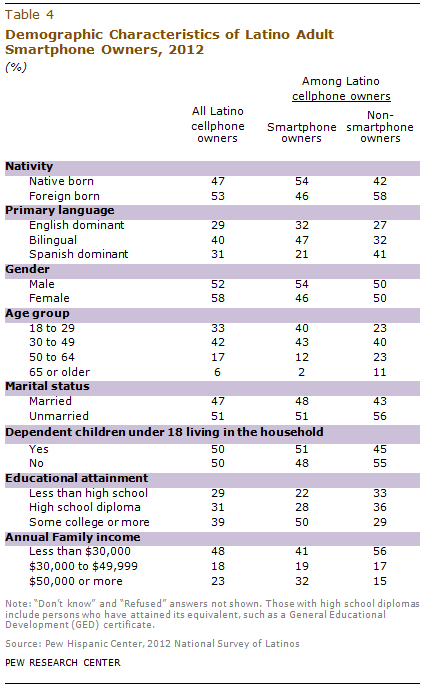 Half (50%) of Latino smartphone owners have some college education or more, compared with about three-in-ten (29%) of those without a smartphone.