How many of the “immigrants” to Mexico were sent back by U.S. authorities?

Of the 1.4 million Mexican immigrants and their children who returned to Mexico from the U.S. between 2005 and 2010, the Pew Hispanic Center estimates that anywhere from 5% to 35% were sent back by U.S. authorities at some point during that five-year period and remained in Mexico as of 2010. The other 65% to 95% returned to Mexico voluntarily.

The estimate range is so wide because data on who is sent back and what happens to them are sketchy; neither the U.S. nor Mexican government has any way of knowing where the returnees end up in later years.

Pew Hispanic’s estimates start with the 4.4 million Mexican citizens deported, removed or returned to Mexico by the U.S. Department of Homeland Security between 2005 to 2010. Based on reviews of data from both countries, the Pew Hispanic analysis estimates that only about 15-25% of these returnees would have been living in the U.S. long enough to appear in U.S. data sources as immigrants. The remainder were apprehended at or near the border shortly after they entered.

Furthermore, Pew Hispanic’s analysis of the EMIF-Norte survey, a Mexican government survey of persons returned by the U.S. government, finds that only about 16% of those who resided in the U.S. in 2005 and spent at least a year in the country said they would not try to go back to the U.S. About six-in-ten said they would try to re-enter the U.S. within a week, and an additional quarter said they would go back “some day.”

While it is impossible to know how many succeed, scholars who have studied Mexico-U.S. migration have concluded that almost everyone who is determined to get into the U.S. illegally eventually does so (Rosenblum, 2012).

A Pew Hispanic Center analysis of a long-running survey of Mexican migrants who have been handed over to Mexican authorities by U.S. law enforcement agents finds changes over the past decade in migrants’ experiences and future intentions.

Migrants sent home in 2010 were more likely to have lived in the U.S. for at least a year than those apprehended five years earlier or 10 years earlier. Those removed in 2010 also were more likely to have been apprehended at home or work rather than while crossing the border. And the more recently repatriated migrants were less likely to say they would try to cross again shortly after apprehension or to say they plan to return to the U.S. someday.

The changes found in migrants’ experiences and intentions appear to be linked to the changing dynamics of U.S. border flows and enforcement, as well as U.S. economic conditions. The number of Mexicans trying to cross the southwest border illegally has declined in recent years. One result of this decline is that there has been a decrease in apprehensions by the U.S. Border Patrol.

Most Mexican migrants expelled by U.S. authorities are returned to their home country—usually within days of crossing the border—by the U.S. Department of Homeland Security, acting without an order of removal. As fewer Mexicans attempt to cross the border, this number has been dropping. Of those sent home, there has been an increase in the number of immigrants sent back based on an order of removal.

The data in this section come from a survey of Mexican migrants who were handed over to Mexican authorities by U.S. law enforcement agents, both migrants who agree to be returned without a formal order and those sent home with an order of removal. The migrants are handed over at transfer points along the U.S. border and at several Mexican airports included in an agreement between the two countries. This survey, called Encuesta sobre Migración en la Frontera Norte de México (EMIF-Norte), has been conducted regularly since 1993 (see the appendix for methodological details). 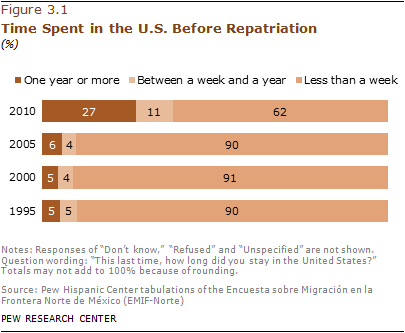 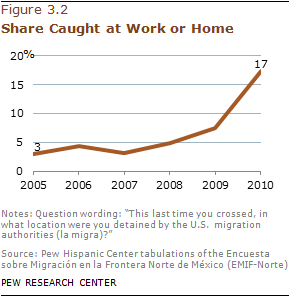 Due to backlogs in processing of removal cases in U.S. immigration courts, people apprehended at work or home and handed over to Mexican authorities in 2010 might have been captured during enforcement actions in prior years. According to some sources, in recent years immigration courts spent about a year to complete cases involving Mexican nationals. In addition, the increased share of migrants apprehended at home or work might reflect reduced arrivals of Mexican immigrants and the lower number of apprehensions at the border.

Will Go Back to the U.S. After Repatriation?

A large majority of migrants handed over to Mexican authorities said they had come to the U.S. for work or to look for a job (83% in 2010). Among these labor migrants, a majority say they will try to return to the U.S. Those handed over in recent years to Mexican authorities, however, are less likely than their counterparts of a decade earlier to say they will try to re-enter the U.S. within a week of repatriation. They are also more likely to say they would never go back to the U.S. to look for work.

Intention to Re-enter Within a Week 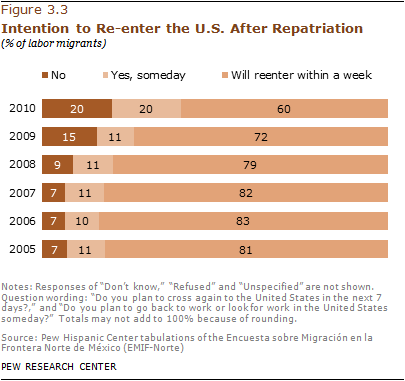 This trend change is partly a reflection of a generalized decrease in the intention to re-enter the U.S. In 2010, the share saying they will try to go back to the U.S.—either within seven days or someday—dropped by 13 percentage points from 92% in 2005. According to the survey, the sharpest change in the intention to re-enter the U.S. shortly after repatriation was among those who spent a year or more in the U.S.

In 2010, 71% of those who had come to the U.S. for work and had stayed for less than a week before being apprehended declared they would attempt entry again within seven days. This share is down from a high of 85% of labor migrants in 2007.

Among those who had spent at least a year in the U.S., fewer than half said they plan to try to re-enter within a week. Intention to come back to the U.S. within a week for this group declined to 43% in 2010 from a recent high of 69% in 2006.

More Likely to Never Go Back to the U.S.

Among repatriated Mexican migrants who had originally come to the U.S. for work, a rising share say they will not try to return to the U.S. again—20% in 2010, compared with 7% in 2005.

When analyzed by time spent in the U.S., those who spent less than a week in the U.S. prior to being removed show a similar trend. The share who reported they had no intention of ever coming back to the U.S. rose to 18% in 2010 from 6% in 2005.

The trend was not as clear among longer-term residents of the U.S.—those who had spent a year or more before being sent home. Among this group of labor migrants, 21% in 2010 said they had no intention of returning to the U.S. This was slightly lower than the share who said so in 2009 (26%) but higher than the share who said so in 2005 (11%). Furthermore, from 2009 to 2010, a rising share said they would return someday to look for work—36%, compared with 22%—even as the share of those intending to try to re-enter immediately dropped in these years.

In 2010, fully 87% of those sent back to Mexico were male, which is much higher than the share of men in the overall Mexican immigrant population (54%). Just under half (46%) were single, 34% were married and 14% were living with an unmarried partner. About half (53%) were head of their household, 6% were spouses of the household head and a third (34%) were the child of the household head.

There was little change in the basic demographics of those handed over to Mexican authorities from 2005 to 2010, except that a somewhat higher share now (14%) report they live with an unmarried partner, compared with past years. Also, in 2010, three-quarters (74%) said they do not speak English, but that proportion declined from 2005, when it was 93%.

Net Migration from Mexico Falls to Zero—and Perhaps Less II. Migration Between the U.S. and Mexico
III. Mexicans Sent Back to Mexico by U.S. Authorities
How Long in U.S.?Where Apprehended?Will Go Back to the U.S. After Repatriation?Demographic Characteristics of Repatriated MigrantsHow many of the “immigrants” to Mexico were sent back by U.S. authorities?
IV. U.S. Immigration Enforcement V. Mexico, by the Numbers VI. Characteristics of Mexican-Born Immigrants Living in the U.S. Appendix A. Additional Tables and Chart Appendix B: A Statistical Profile of Mexican Immigrants in the U.S. Appendix C. Methodology