Latinos are less likely than whites to access the internet, have a home broadband connection or own a cell phone, according to survey findings from the Pew Hispanic Center, a project of the Pew Research Center. Latinos lag behind blacks in home broadband access but have similar rates of internet and cell phone use.1 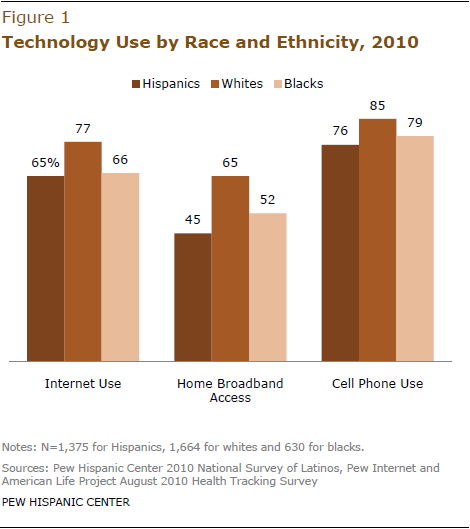 Hispanics, on average, are also younger than whites. However, even within each age group, Hispanics show lower levels of technology use than do whites. 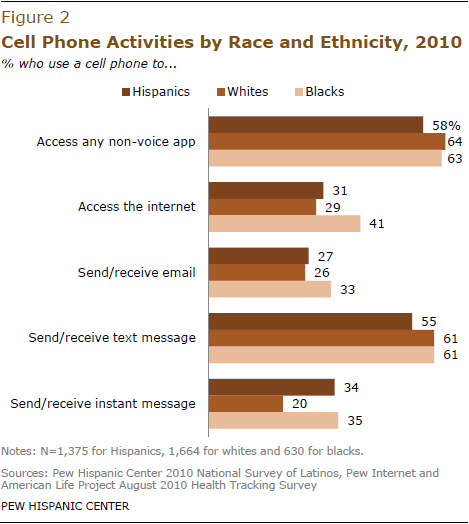 Survey questions also probed for the use of non-voice applications on cell phones. Respondents were asked specifically about whether they access the internet and whether they use email, texting or instant messaging from a cell phone. The findings reveal a mixed pattern of non-voice cell phone application use across ethnic and racial groups. Hispanics are less likely than whites to use any non-voice applications on a cell phone (58% vs. 64%), and they are also less likely than whites to send or receive text messages (55% vs. 61%). However, Hispanics and whites are equally likely to access the internet and send or receive email from a cell phone. And Hispanics are more likely than whites to engage in instant messaging (34% vs. 20%). Compared with blacks, Hispanics are less likely to access the internet (31% vs. 41%) or send or receive email (27% vs. 33%) from a cell phone, but rates of texting and instant messaging are similar for the two groups.

Though they are no more likely than whites to access the internet from a cell phone, Hispanics are more likely to do so in lieu of a home internet connection. Some 6% of Latinos report that they access the internet from a cell phone but have no internet access at home. This rate is the same for blacks, but notably higher than the rate for whites (1%). While controlling for educational attainment and income erases ethnic differences in internet use, broadband access and cell phone ownership, this is not entirely the case when it comes to the ethnic difference in dependency upon a cell phone for internet access. Controlling for income and education erases the differences for the highly educated and most affluent, but differences still persist for those with no college experience, and those earning less than $50,000 annually.

Next: II. Internet Use
← Prev Page
You are reading page1Page2Page3Page4Page5Page6Page7Page8
Next Page →