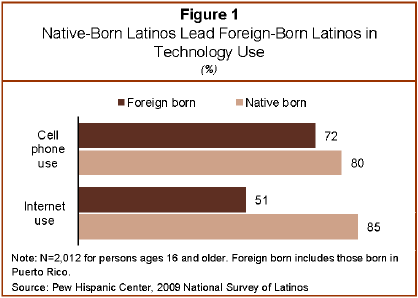 Latinos are the largest minority group and largest immigrant group in the United States. Overall, they comprise 15.4% of the total U.S. population. Among Latinos ages 16 and older, 56% are foreign born and 44% were born in the U.S.2

While rates of technology use among native-born Hispanics are relatively high, technology use for the full population of Hispanics continues to lag behind the use rates of the non-Hispanic population. When it comes to internet use, some 64% of Latinos ages 18 and older go online,3 compared with 78% of non-Latinos. More than three-fourths (76%) of Latinos use a cell phone, compared with 86% of non-Latinos.4

Differences in Cell Phone Use among Latinos 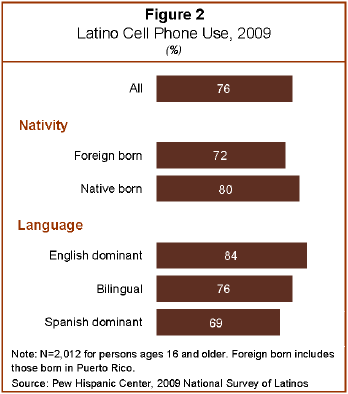 Hispanic males ages 16 and older are more likely than their female counterparts to report using a cell phone. While 80% of males use a cell phone, just 72% of females do so. But among Hispanic teens ages 16 to 19, the reverse is true—females are more likely to use a cell phone than their male counterparts (82% versus 73%). There is no significant gender difference in cell use for Hispanics ages 20 to 25, but among Hispanic adults ages 26 and older, males are the dominant cell phone users–80% versus 69%. 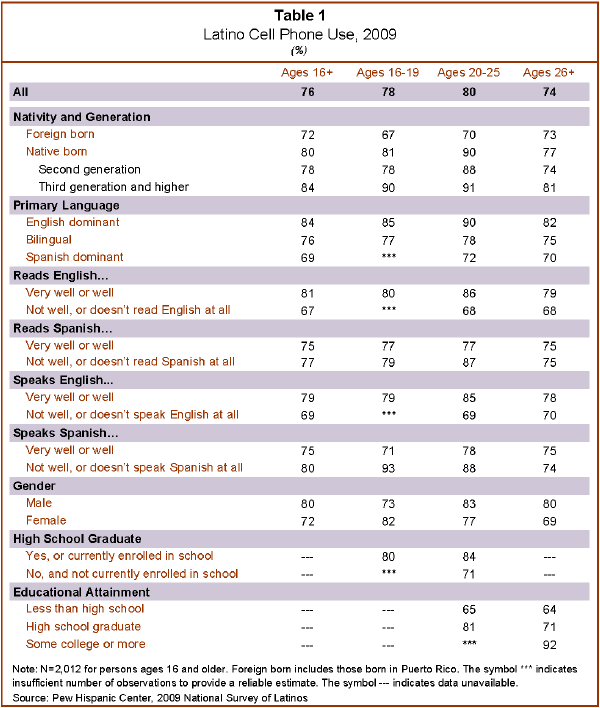 Differences in Internet Use among Latinos

Nativity is closely associated with internet use. Half (51%) of foreign-born Latinos go online, while 85% of Latinos born in the U.S. do so. This internet gap is due in part to the fact that the native born are younger on average than their foreign-born counterparts. However, this nativity difference in internet use persists within each of the three age groups examined—16- to 19-year olds, 20- to 25-year olds, and those ages 26 years and older–suggesting that there are other explanatory factors as well. 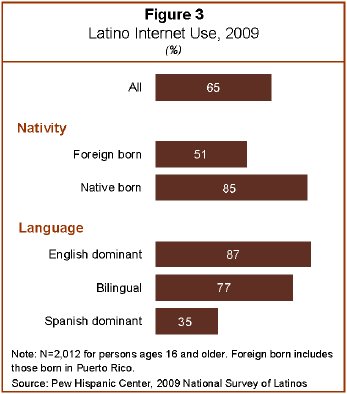 No gender differences in internet use exist among the full population of Latinos ages 16 and older. However, a closer analysis reveals gender differences within each age group. For the younger age groups, females are more likely than their male counterparts to use the internet—88% versus 80% for Latinos ages 16 to 19; and 79% versus 70% for Latinos ages 20 to 25. However, among Latinos ages 26 and older, men are more likely to report that they use the internet. Almost two-thirds (65%) say as much, compared with 57% of women. 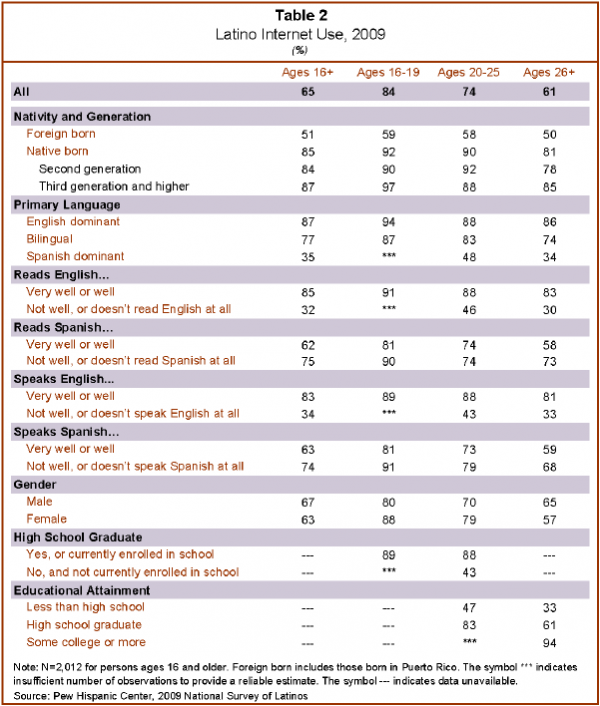 Technology Use among Latinos and Non-Latinos

Latinos continue to lag behind non-Latinos in cell phone use. Just over three-fourths (76%) of Latinos ages 18 and older use cell phones; this number is 86% among non-Latinos.9 The same is true with regard to internet use, despite marked gains by Latinos in recent years (Livingston, Parker and Fox 2009). Some 64% of Latinos use the internet, compared with 78% of non-Latinos—a 14 percentage point difference.

In general, age is inversely related to cell phone and internet use, so the relatively youthful profile of Hispanics is a demographic fact that in and of itself buoys the statistics for overall Hispanic technology use. Controlling for age shows a more precise portrait of the ethnic differentials in technology use. 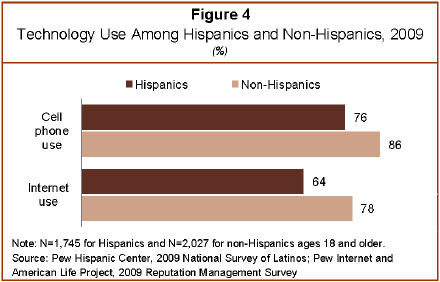 Among those ages 16 and 17, about seven-in-ten (72%) Latinos use a cell phone, compared with eight-in-ten (82%) non-Latinos. Eighty percent of Latinos ages 18 to 25 use a cell phone, and 94% of their non-Hispanic counterparts do the same. The ethnic differential in cell phone use is particularly notable for the oldest ages—non-Latinos ages 55 and older are 25% more likely than their Latino counterparts to use the technology, with 75% of non-Latinos, and 60% of Latinos reporting that they use cell phones. 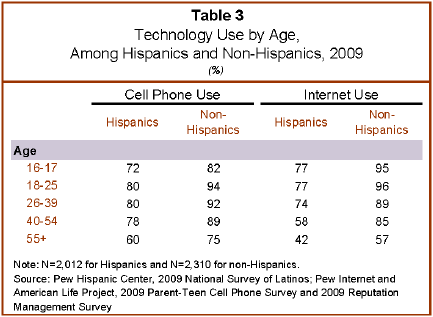 When it comes to internet use, almost all young non-Hispanics (ages 16 to 25) go online, while just over three-fourths (77%) of their Hispanic counterparts do the same. For people ages 55 and older, 42% of Latinos use the internet, compared with 57% of non-Latinos.

Results for non-Hispanics ages 16 to 17 are based on the Pew Internet and American Life Project (PIAL) 2009 Parent-Teen Cell Phone Survey, which was conducted on cellular as well as landline telephones from June 26 through September 24, 2009 among a nationally representative sample of 800 teens ages 12 to 17 and their parents. The margin of error for the full sample of teens is plus or minus 3.8 percentage points.

Results for non-Hispanics ages 18 and older are based on the PIAL 2009 Reputation Management Survey, which was conducted on cellular as well as landline telephones from August 18 through September 14, 2009 among a nationally representative sample of 2,253 adults. The margin of error for the full sample is plus or minus 2.3 percentage points.