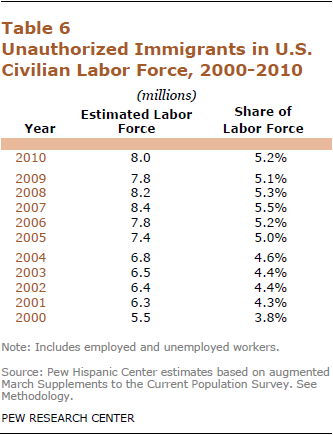 There were 8 million unauthorized immigrants in the workforce in March 2010, down slightly from 2007, when there were 8.4 million. They represent 5.2% of the workforce, similar to their proportion for the past half-decade, when they represented 5% to 5.5% of workers.

Next: Appendix A: Additional Figures and Tables
← Prev Page
Page1Page2Page3Page4You are reading page5Page6Page7Page8
Next Page →