Recent changes in the working-age population and labor force highlight the sensitivity of immigration to the business cycle. The first signs of weakness in the construction sector appeared in 2006, a year before the official start of the Great Recession. As the downturn deepened, the annual flow of immigrants to the U.S. decreased. A September 2010 report from the Pew Hispanic Center (Passel and Cohn, 2010) estimated that the number of unauthorized immigrants in the U.S. labor force fell from 8.4 million in March 2007 to 7.8 million in March 2009.16 It appears that the economic recovery may be attracting immigrant workers back into the U.S.

As the economy has shown signs of recovery, so has the foreign-born workforce. From the second quarter of 2009 to the second quarter of 2010, the immigrant workforce increased by 709,000: 412,000 Hispanics and 297,000 non-Hispanics.17 However, there is no way to conclude from the data whether this turnabout will last. Among other things, it is likely to depend on the durability and strength of the economic recovery.

The growth in the foreign-born population is driven by new arrivals. The population of immigrants already in the U.S. can only decrease, either through emigration or death. One way to estimate the impact of new arrivals is to look at the change in the population of recently arrived immigrants, those who have been in the U.S. since 2000. As shown in Appendix Tables B6 and B7, recently arrived immigrants, Hispanic and non-Hispanic, added 1.5 million to the working-age population from the second quarter of 2009 to the second quarter of 2010. That compared with an increase of 623,000 in the preceding year. 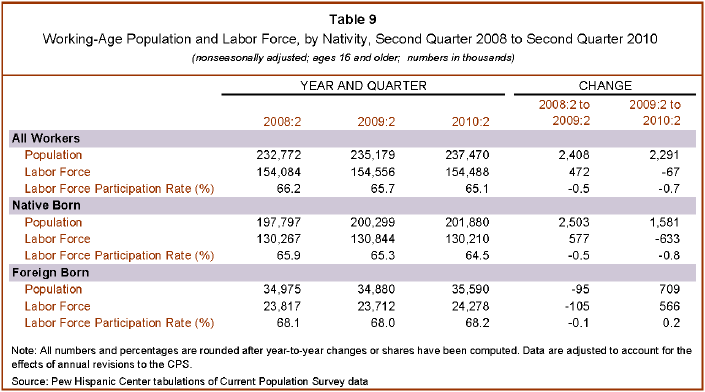 Next: IV. Earnings of Native-born and Foreign-born Workers
← Prev Page
Page1Page2You are reading page3Page4Page5Page6
Next Page →

After the Great Recession: Foreign Born Gain Jobs; Native Born Lose Jobs II. Employment and Unemployment in the Recession and Recovery
III. The Working-Age Population and the Labor Force: Are Immigrants Returning?
IV. Earnings of Native-born and Foreign-born Workers Appendix A: Revisions of the Current Population Survey Appendix B: Data Tables