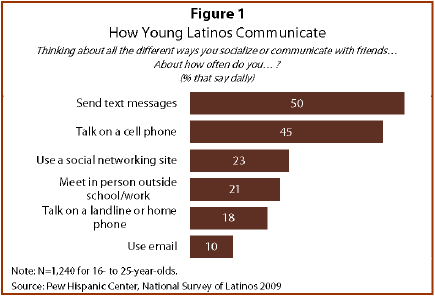 When it comes to socializing and communicating with friends, young Latinos (ages 16 to 25) make extensive use of mobile technology. Half say they text message (50%) their friends daily, and 45% say they talk daily with friends on a cell phone. Other communication platforms are less widely used for socializing. For example, fewer than one-in-five young Latinos (18%) say they talk daily with their friends on a landline or home phone, and just 10% say they email their friends daily. These findings are based on a new analysis of data from a nationwide telephone survey of Latinos conducted by the Pew Hispanic Center, a project of the Pew Research Center.

Use of mobile communication technologies differs notably among young Latinos by nativity. Two-thirds (65%) of the native born say they communicate with their friends by text message daily, while just 26% of the foreign born do so. And more than half (55%) of the native born talk daily by cell phone with their friends, while just 29% of the foreign born say they do the same.

Even though text messaging and cell phone calls are the most widely used mediums of social communication among young Latinos, they use these platforms less extensively than do their non-Latino counterparts. Among 16- and 17-year-olds,1 just under half (49%) of Hispanics text daily, compared with 64% of non-Hispanics. When it comes to talking with friends daily via cell phone, there is less of a difference—44% of Hispanics say they do, compared with half (51%) of non-Hispanics who say the same.

Hispanics are the nation’s largest and youngest minority ethnic group. In 2008, there were 46.9 million Hispanics in the U.S., representing 15.4% of the total U.S. population. Among young people, Hispanics represent an even larger share. Some 18%, or 7.5 million, of those ages 16 to 25 are Hispanic (Pew Hispanic Center, 2010).

This is the last of three reports about young Latinos based on the 2009 NSL. The first report explored the educational attitudes and expectations of young Latinos (Lopez, 2009). The second explored the attitudes, behaviors, identities, and demographics of Latino youths (Pew Hispanic Center, 2009).

“Foreign born” refers to persons born in Puerto Rico or outside of the United States. Although individuals born in Puerto Rico are U.S. citizens by birth, they are included among the foreign born because they are born into a Spanish-dominant culture and because on many points their attitudes, views and beliefs are much closer to Hispanics born abroad than to Latinos born in the 50 states or the District of Columbia.

“Native born” or “U.S. born” refers to persons born in the United States and those born abroad to parents at least one of whom was a U.S. citizen.

Next: II. How Young Latinos Communicate
← Prev Page
You are reading page1Page2Page3Page4
Next Page →