The economic well-being of any group of youths ages 16 to 25 depends in part on the economic status of the households in which they live and in part on their own personal engagement with the labor market. On both fronts, Latino youths lag well behind white youths. But they surpass black youths on most measures of economic well-being and are more active in the labor market than Asian youths. 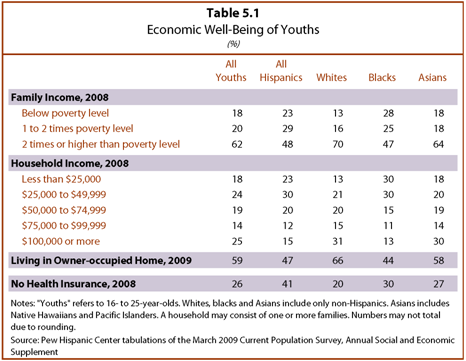 Latino youths are more likely than other youths to live in families whose income is below the poverty level. The U.S. government calculates poverty based on a combination of household income and the number of people living in the household. For instance, a family of four, including two related children, with an income of less than $21,834 in 2008 was defined to be living below the poverty threshold.11 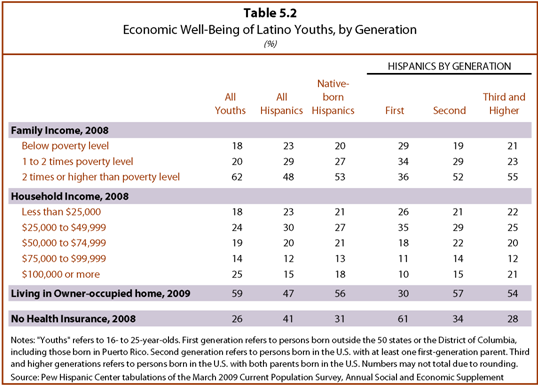 Similar outcomes are evident with respect to household income, homeownership and health insurance. Six-in-ten (61%) of foreign-born Hispanic youths live in households with incomes of less than $50,000, compared with 48% of native-born youths. Only 30% of the foreign born live in owner-occupied homes, compared with 56% of native-born Latino youths. And 61% of foreign-born Latino youths lack health insurance, compared with 31% of the native born. The differences between second- and third-generation youths are not large. 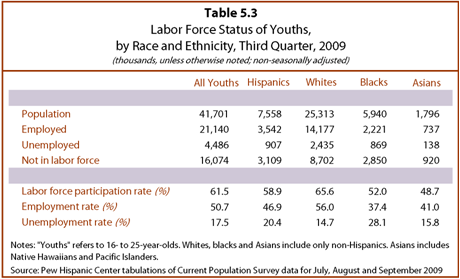 Underneath the aggregate statistic are notable differences in labor market experiences between foreign-born and native-born Latino youths. Those who are foreign born are more likely to be active in the labor force, and a smaller share of them is unemployed. That is because they are relatively older and less likely to be enrolled in school. But young foreign-born workers are concentrated in a handful of lower-skill occupations, a likely consequence both of their low levels of education and of the fact that more than half are in the country illegally.

Latino youths are nearly as active in the labor market as all youths. Some 58.9% of Latino youths participate in the labor market, compared with 61.5% of all youths. Labor force participation among young Hispanics exceeds that among blacks and Asians but falls short of the rate (65.6%) among whites. Consistent with these trends, a greater share of Latino youths (46.9%) is employed than black (37.4%) or Asian (41.0%) youths. However, the employment rate among white youths is higher (56.0%).

With respect to unemployment, the rates for black youths tend to run much higher than those of others groups, and this is true both in good and bad economic times. The unemployment rate for black youths (28.1%) in the third quarter of 2009 is well above that of Hispanic (20.4%), Asian (15.8%) and white (14.7%) youths.

Among Latino youths, labor market outcomes for the foreign born appear better than for the native born by most measures. In the third quarter of 2009, the unemployment rate for first-generation Latino youth—16.7%—was six percentage points less than the rate for native-born youth—22.6%. 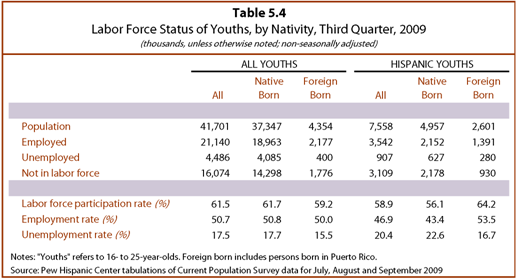 The greater engagement of foreign-born Latino youths with the labor market is most likely a result of their age and school enrollment—they are both older and less likely to be in school. With respect to age, the majority of foreign-born youths in the 16-to-25 cohort—54.1%—are ages 22 to 25, compared with only 34.7% of native-born youths (Table 2.2 above). As shown in Table 5.5, labor market outcomes improve steadily with age, for Hispanic youths as well as for all youths. 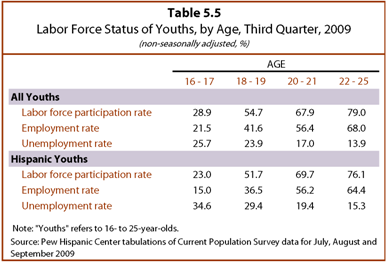 With respect to school enrollment, foreign-born Latino youths are less likely to be enrolled in high school or college than are native-born Latino youth—34.3% versus 58.9% in March 2009 (Table 6.2 below). That gap also contributes to observed differences in labor market outcomes because those enrolled in school, especially those enrolled full time, are less engaged with the labor market. 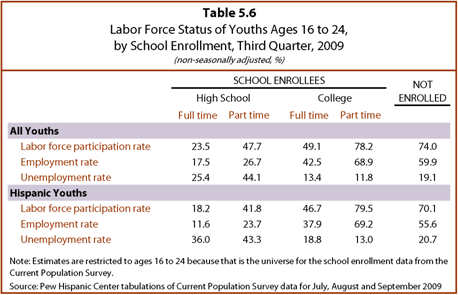 Foreign-born Latinos differ from native-born youths in one other important aspect—their occupational status. While they are less likely to be without a job, the majority of foreign-born youths with a job—52.4%—are employed in only four lower-skill occupations—food preparation and serving; building and grounds cleaning and maintenance; construction and extraction; and production.14 Lower levels of education and unauthorized status are likely reasons that foreign-born Latino youths face a limited choice of jobs.

“You’re bilingual so that you have a major opportunity in jobs. So you know, most jobs nowadays…the Hispanic population is getting so much bigger that [jobs] are requiring people who know two languages…so you have an advantage over whites and blacks.”
—25-year-old Hispanic female 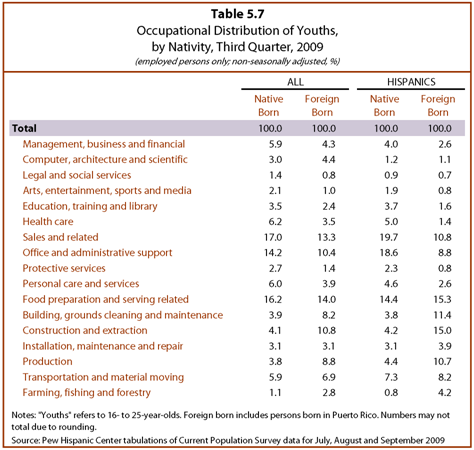 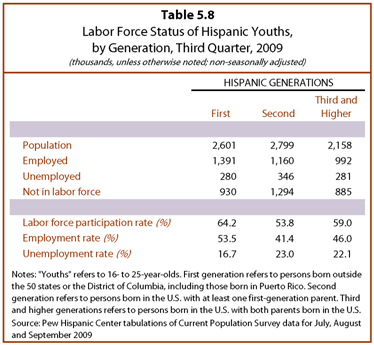 Next: VI. Education: The Gap Between Expectations and Achievement
← Prev Page
Page2Page3Page4You are reading page5Page6Page7Page8Page9Page10Page11Page12
Next Page →