Results for this study are based on telephone interviews conducted by Social Science Research Solutions (SSRS), an independent research company, among a nationally representative sample of 2,012 Latino respondents ages 16 and older,43 from Aug. 5 to Sept. 16, 2009. Of those respondents, 1,002 were native born (excluding Puerto Rico) and 1,008 were foreign born (including Puerto Rico). For results based on the total sample, one can say with 95% confidence that the error attributable to sampling is plus or minus 3.7 percentage points for total respondents.

According to government statistics from the National Health Interview Survey (NHIS) during the last six months of 2008, 25% of Hispanic adults lived in households reachable only by cell phone. Adults who are cell-only are very different demographically from those reachable on a landline. In particular, they tend to be younger, less likely to be married or have children, or to own a home. To address the growing number of Hispanic households in the U.S. that are reachable only by cell phone, the study included interviews from both landline (n=1,360) and cell phone (n=652) sample frames.

Both sample frames were stratified via a disproportionate stratified design. All telephone exchanges in the contiguous 48 states were divided into groups, or strata, based on their concentration of Latino households. For the landline frame, the sample was also run against InfoUSA and other listed databases, and then scrubbed against known Latino surnames. Any “hits” were subdivided into a surname stratum, with all other sample being put into other RDD strata.

The landline sample was divided into 10 mutually exclusive strata: five strata denoted by the likely incidence of Hispanic residence, each divided into listed and unlisted samples. Listed samples refer to phone numbers that could be matched with available lists, indicating the presence of persons between the age of 16 and 25 in the household. This design was intended to allow oversampling in high-incidence Hispanic areas and targeting of households that were likely to include persons 16 to 25 years of age, while assuring that all Latino households in the U.S. had a known probability of selection.

Because incidence in the low stratum was anticipated to be extremely low, an alternative sampling method was employed, randomly selecting from a pool of thousands of households previously interviewed in SSRS’s omnibus Excel survey that were known to be Latino households in general (for the general component), or Latino households with 16- to 25-year-olds present (for the listed component).

Overall, then, the study employed 13 strata: 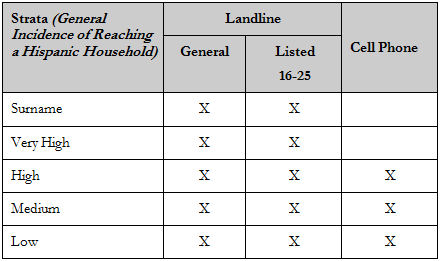 SSRS applied quotas within each stratum to ensure the overrepresentation of Latinos between the ages of 16 and 25. Furthermore, to accumulate a sufficient number of responses from Latinos ages 16 and 17; this age group was disproportionately selected over all other age groups.

It is important to note that the existence of a surname stratum does not mean this was a surname sample design. The sample is RDD, with the randomly selected telephone numbers divided by whether they were found to be associated with or without a Latino surname. This was done simply to increase the number of strata and thereby increase the ability to meet ethnic targets and ease administration by allowing for more effective assignment of interviewers and labor hours.

A five-stage weighting design was used to ensure an accurate representation of the national Hispanic population: