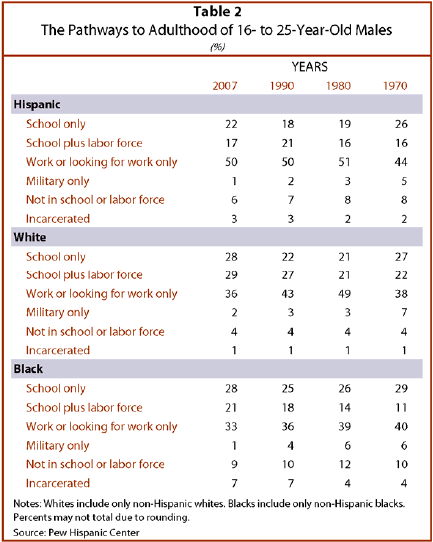 This report focuses on the pathways into adulthood taken by Latino and other youth ages 16 to 25. The analysis includes all youths and is not restricted to civilian youths or noninstitutionalized youths. Hence, we can present a comprehensive portrait of the activities of youths.

Using information on residence and status at the time of interview, male activities or pathways can be divided into six mutually exclusive endeavors (Table 2).4 Both schooling and work are enumerated. Labor market economists consider job search a productive activity, and unemployed youths are included in the labor force. So the “work” pathway in this analysis includes both employed youths and youths who have looked for work. Traditionally, enlistment in the military has been an important entry point into adulthood for young minority males and hence the analysis distinguishes between employment in the military and civilian employment. Nonenrolled employment in the armed forces is the fourth possible endeavor. Finally, among young men who are neither enrolled in school nor part of the labor force, we can distinguish between those incarcerated in prison or jails and those who are not incarcerated.5

For young women, a slightly different taxonomy of labor market engagement is apropos. Among young women in 2007, fewer than 1 percent were either in the armed forces or incarcerated in correctional facilities and thus little clarity is sacrificed by not enumerating these very small female populations. Significant numbers of young women are mothers, however, and young motherhood is strongly associated with both decisions about school continuation and participation in the labor force (Ahituv and Tienda, 2004). This analysis identifies five mutually exclusive endeavors or pathways for young women (Table 3). As with young men, the first three involve the core activities of either schooling or skill acquisition through the work world. Among young women who are neither enrolled in school nor in the labor force, those who are mothers are distinguished from those who do not have parenting responsibilities. 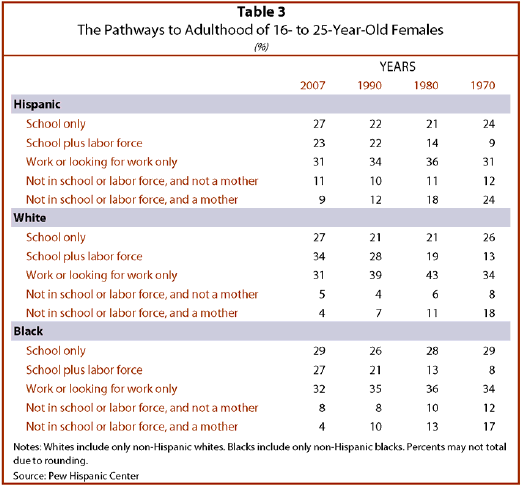