Hispanics now make up 22% of all children under the age of 18 in the United States–up from 9% in 1980–and as their numbers have grown, their demographic profile has changed. 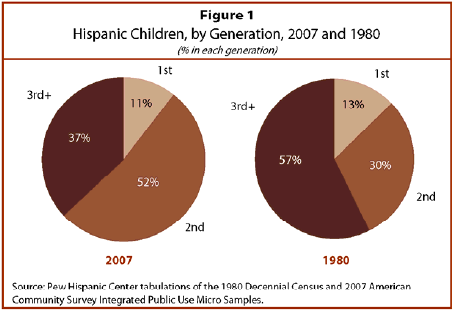 In 1980, only three-in-ten Latino children were second generation, while nearly six-in-ten were in the third generation or higher. These shifts are noteworthy because many social, economic and demographic characteristics of Latino children vary sharply by their generational status. A Pew Hispanic Center analysis of U.S. Census Bureau data finds that:

Most of these data reflect the classic pattern of socioeconomic gains for immigrant families from one generation to the next. However, there are also some contrary trends. As indicated above, the chances of being raised by a single parent are much greater among Latino children in the third generation or higher than among first- or second-generation Latino children.1 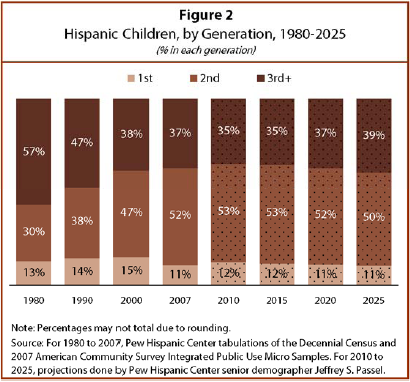 This report present findings from several existing and new Pew Hispanic Center analyses of U.S. Census Bureau data as well as Pew Hispanic Center population projections. The analysis of the legal status of Hispanic children underlying Table 1 utilized the augmented March 2008 Current Population Survey. See Passel and Cohn (2009) for further details. The methods and assumptions underlying the generational projections of Hispanic children from 2010 to 2025 are described in detail in Passel and Cohn (2008). The historical and current profile of Hispanic children derives from new analyses of Decennial Census and American Community Survey data. See the data appendix for further details.

Unless otherwise noted, this report uses the following definitions of the first, second, and third or higher generations:

First: Foreign-born; an individual who is not a U.S. citizen at birth or, in other words, who is born outside the U.S., Puerto Rico or other U.S. territories and whose parents are not U.S. citizens.

Second: An individual who is a U.S. citizen at birth (including people born in the United States, Puerto Rico or other U.S. territories, as well as those born elsewhere to parents who are U.S. citizens) with at least one first-generation parent.

Third or higher: An individual who is a U.S. citizen at birth with both parents U.S. citizens at birth.
The terms “Latino” and “Hispanic” are used interchangeably in this report, as are the terms “foreign born” and “immigrant.”

Next: II. The Legal and Generational Status of Hispanic Children
← Prev Page
You are reading page1Page2Page3Page4Page5
Next Page →

The Nation’s Latino Population Is Defined by Its Youth
Between Two Worlds: How Young Latinos Come of Age in America
Generational Differences
A Profile of Hispanic Public School Students
Hispanic Identity Fades Across Generations as Immigrant Connections Fall Away
Defining generations: Where Millennials end and Generation Z begins
Growing Share of Americans Say They Plan To Get a COVID-19 Vaccine – or Already Have
Quiz: Are you a Core Conservative? A Solid Liberal? Or somewhere in between?
Most Americans Support Tough Stance Toward China on Human Rights, Economic Issues
In their own words: What Americans think about China