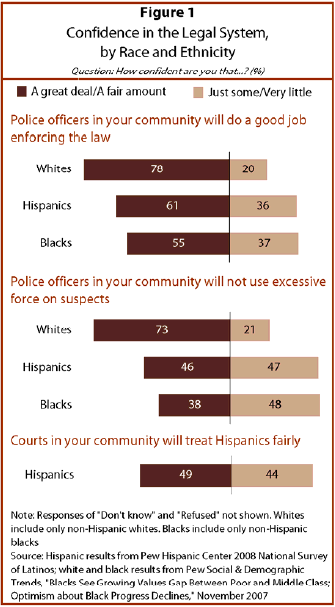 At a time when Latinos are interacting more than ever with police, courts and prisons, their confidence in the U.S. criminal justice system is closer to the low levels expressed by blacks than to the high levels expressed by whites, according to a pair of nationwide surveys by the Pew Research Center.1

In recent decades, Hispanics’ exposure to all parts of the criminal justice system has risen even faster than their rising share of the U.S. adult population. In state, federal and local prisons and jails, the share of inmates who were Hispanic increased from 16% in 2000 to 20% in 2008 (West and Sabol, 2009). During this period, the share of Hispanics in the adult U.S. population rose from 11% to 13%.

Overall, according to the Pew Center on the States, some 4% of adult Hispanics in 2007 were either in prison or jail or on probation or parole. This is larger than the share of whites (2%) who were under some form of corrections control in 2007 and smaller than the share of blacks (9%). 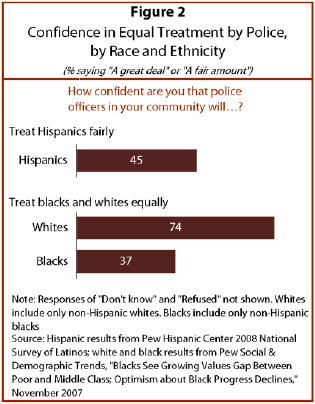 This report is based on a bilingual telephone survey of a nationally representative sample of 2,015 Hispanics ages 18 and older. Interviews were conducted from June 9 through July 13, 2008, by the Pew Hispanic Center, a project of the Pew Research Center. The margin of error for the sample is plus or minus 2.8 percentage points at the 95% confidence level. For a description of the survey methodology, see Appendix 1.

Other key findings of the report:

The 2008 National Survey of Latinos asked Hispanic adults about their views of the police and courts in their communities, their perceptions of crime and any interaction they or their immediate family members have had with the criminal justice system. The survey was conducted from June 9 through July 13, 2008, among a randomly selected, nationally representative sample of 2,015 Hispanic adults. The survey was conducted in both English and Spanish. The margin of error for the full sample is plus or minus 2.8 percentage points at the 95% confidence level.

The terms “whites” and “blacks” are used to refer to the non-Hispanic components of their population unless otherwise noted.

Next: II. Confidence in the Criminal Justice System
← Prev Page
You are reading page1Page2Page3Page4Page5
Next Page →