Wage growth in 2007 was moderate and reflected the effects of the economic downturn. Hispanics as well as non-Hispanics experienced slower wage growth in 2007 than in 2006. But workers dependent on the construction industry—including male Hispanics, Mexican-born workers, newly arrived Hispanic immigrants and Latino construction workers in general—saw their wages decline. Many groups of Hispanic workers earned less in the first quarter of 2008 than they did two years ago, in the first quarter of 2006, although native-born Hispanics’ wages increased slightly. 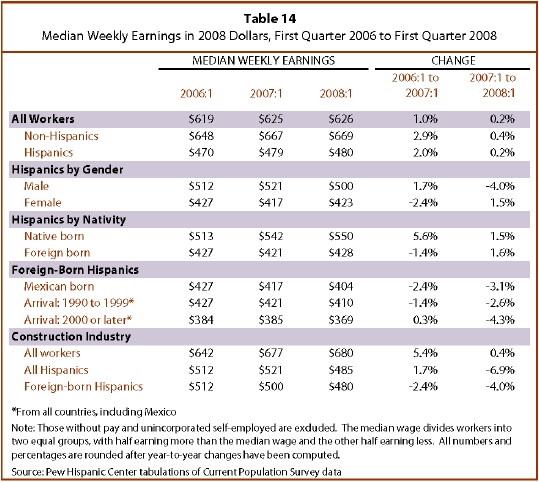 In the first quarter of 2008, the median weekly wage in the economy was $626—half of workers earned more and the other half earned less.17 The median earnings of non-Hispanics were slightly higher at $669 (all wages expressed in 2008 dollars).

Native-born Hispanics were able to secure wage gains in both 2006 and 2007. Nonetheless, wage growth for them also moderated in 2007 as they experienced an increase of only 1.5% in comparison with 5.6% in 2006. Wages for foreign Hispanics are stagnant. The current weekly earnings of foreign-born Hispanics—$428—are essentially the same as the $427 in the first quarter of 2006.

The most notable aspect of wage trends in 2007 was the experience of Hispanic workers who depend upon the construction industry. The median weekly earnings of workers born in Mexico and those who arrived in 2000 or later fell 3.1% and 4.3%, respectively, in 2007. Median wages for both groups of workers are currently less than their level two years ago, in the first quarter of 2006.

Next: Appendix A: Revisions of the CPS
← Prev Page
Page1Page2Page3Page4Page5Page6Page7You are reading page8Page9Page10
Next Page →