The NAEP, or the “Nation’s Report Card,” is the best-known assessment of student learning for the U.S. as a whole. NAEP assesses student learning in mathematics and reading at grades 4 and 8, providing national level results as well as results for some states.

For the nation as a whole, NAEP reveals that ELL students were far behind white students in their mathematics and reading skills in 2005. Performance on the main NAEP is reported in terms of four achievement levels: below basic, basic, proficient, and advanced. Since relatively few students from any NAEP student group perform at the advanced level—and ELL students nationally tend to be concentrated at the lower achievement levels—this report presents the NAEP achievement gap in terms of performance at or above the basic level of achievement. The National Center for Education Statistics also reports NAEP results in this fashion (NCES, 2005).The basic achievement level identifies “partial mastery of prerequisite knowledge and skills that are fundamental for proficient work.” 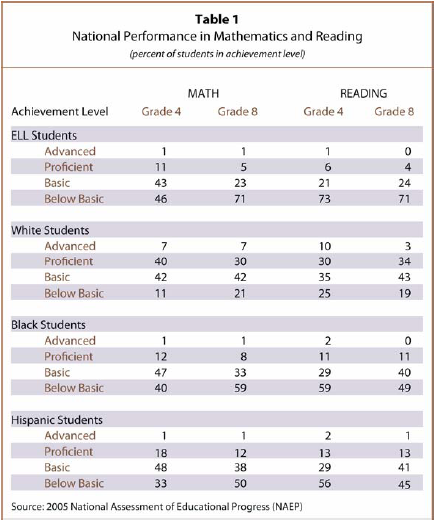 This report assesses the gap in achievement as the difference in the percentages at or above the basic level for ELL students and a comparison group. For example, the gap in grade 4 math achievement between white and ELL student is 35 percentage points (89% for whites versus 54% for ELL students) (Figure 1). In conceptual terms, the 35 point gap is how far the ELL student group as a whole lags behind in demonstrating at least “partial mastery of prerequisite” skills. 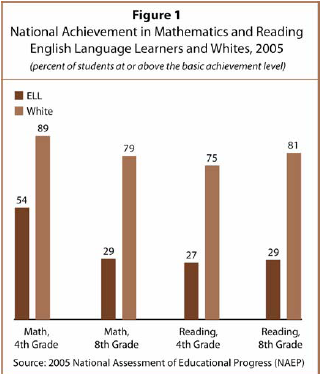 Compliance with NCLB mandates will be determined not by performance on the NAEP but rather by testing programs developed and administered separately by each of the states. However, measuring the achievement gaps in the NAEP is a way of illustrating how much ground needs to be covered to accomplish the goal of having students of all groups meet the same standards of minimum proficiency. 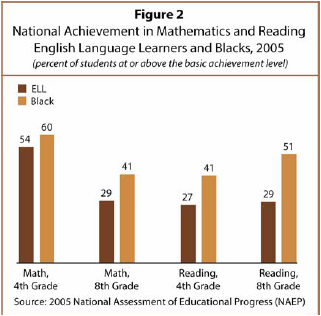 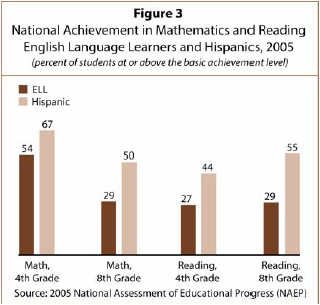 In terms of learning, the 2005 NAEP indicates that ELL students trailed behind Hispanic students in their math and reading abilities (Figure 3). For example, in grade 4 math 67% of Hispanic students performed at or above the basic level, so ELL fourth graders trailed 13 percentage points behind their Hispanic peers.

In education circles, NAEP is often referred to as the gold standard of educational assessments. States can elect to participate in the state NAEP. The state assessment is identical to the national assessment in content. In 2005 all states and the District of Columbia participated in the grade 4 and 8 math and reading assessment, but state-level results for ELL students are not available for all states.

In 2005 a large sample of about 172,000 fourth-graders and 162,000 eighth graders participated in NAEP nationwide. NAEP does not provide scores for individual students or schools. Achievement is measured for students by grade and subgroups within those grades.

This report focuses on the reading and math abilities of students, but the NAEP has also assessed abilities in science, writing, U.S. history, civics, geography, and the arts. NAEP results are available at the NAEP Data Explorer: http://nces.ed.gov/nationsreportcard/nde/

The ELL achievement gap widens at higher grades. For example, in fourth grade math, ELL students were 35 points behind white fourth graders. In grade 8, ELL students were 50 points behind white eighth graders (Figure 1). The widening of the ELL to white gap at higher grades is not unique to the 2005 NAEP assessment. It is also apparent in assessments the states are required to administer under No Child Left Behind (see the Appendix). In California, for example, student achievement results on the Stanford Achievement Test demonstrated large achievement gaps that increased at the higher grades (Gandara, et. al., 2003).

Is this widening gap from 4th to 8th grades evidence of failure on the part of the schools and the students, or are there other factors to consider? Indeed, change in the composition of the ELL population across these grades appears to explain some of the difference: Higher achieving students are removed from the ELL population while newly arrived immigrants just starting out in U.S. schools are added to it. These factors, explored below, help explain why ELL students fall further behind white students from grade 4 to grade 8. But these changes in composition do not diminish the challenges faced by students and schools in attempting to close the gap as mandated by federal policy.

The U.S. Department of Education’s administrative data on English language learners (collected in the Common Core of Data) has little information on these students other than their school district. Using Census data, however, the characteristics of limited English speaking students can be examined. Limited English ability in the Census only refers to speaking abilities. ELL status depends on reading and writing abilities, in addition to speaking abilities, as well as other test scores, grades and teacher input (Jepsen and de Alth, 2005). The limited English population is frequently used as a proxy for the ELL population (Capps, et.al 2005). 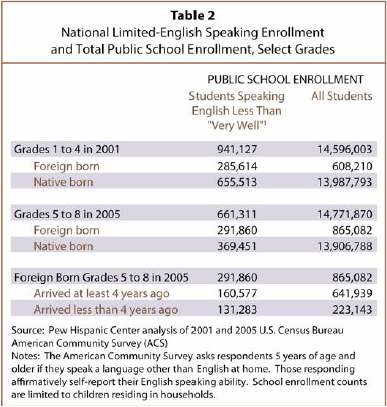