History shows that the proportion of foreign-born residents who are naturalized tends to be highest in times of low immigration. The highest percentage of naturalized citizens among the foreign-born for the past century was in 1950, which followed several decades of restrictions on immigration (see Appendix Table 2). The opposite also has been true: Naturalization levels were not as high in 1910 and fell in 1920, just after a surge in immigration between 1900 and 1914 that was not equaled again until the 1980s. 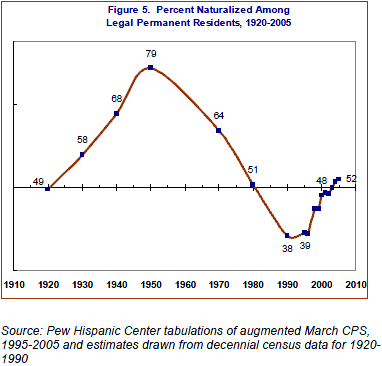 As limits on immigration eased and more non-citizens were added to the population, the naturalization rate began to decline. Less than two-thirds of the legal foreign-born population had become citizens in 1970, and by 1980, about half were citizens.

The share of legal permanent residents who were citizens hit a low point of 38% in 1990. The downward trend then stopped for the first time in decades; by 1995, the share naturalized was 39%. The share then climbed steadily to reach a slim majority in 2003. By 2005, the proportion of legal immigrants who were naturalized reached 52%, about the same as it was in 1980 (Figure 5).

Trends in the Foreign-Born Population

The nation’s foreign-born and naturalized citizen populations continue to reach record numbers each year. But the number of legal permanent residents who are not citizens is about the same as it was in the mid-1990s. That is because the rising number of naturalized citizens has balanced growth in new authorized migrants. In other words, though large numbers of new legal immigrants enter the non-citizen pool each year, their arrival is offset by the large number of noncitizens who naturalize. 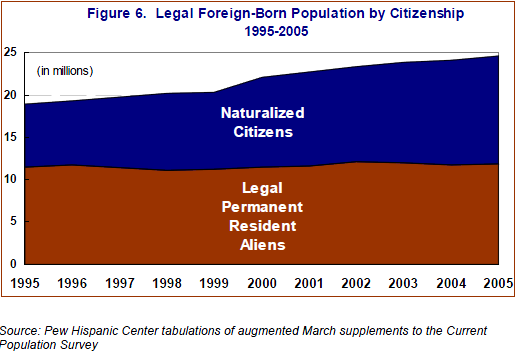 The number of non-citizens who are legal permanent residents was 11.8 million in 2005, only a slight increase from 11.5 million in 1995. Those who are eligible to naturalize numbered 8.5 million in 2005, a small rise from nearly 8 million a decade earlier. The number of legal permanent residents who will become eligible to naturalize within five years has fluctuated within the range of 2.6 to 2.9 million since 1995.

During the same time period, the nation’s foreign-born population, including both authorized and unauthorized immigrants, has grown by 49 percent, from 24 million in 1995 to 36 million in 2005. Among the nation’s foreign-born population in 2005, the three major groups of immigrants were roughly equal in size: 35% were naturalized citizens; 33% were legal permanent residents; and 31% were undocumented immigrants (Figure 2). In 1995, those proportions were 30%, 47% and 20%, respectively.

Geographic Trends in the Naturalized Population

As the naturalized population has risen, its composition has changed, reflecting trends in sending countries as well as naturalization rates that rose more sharply for some countries of origin than for others. 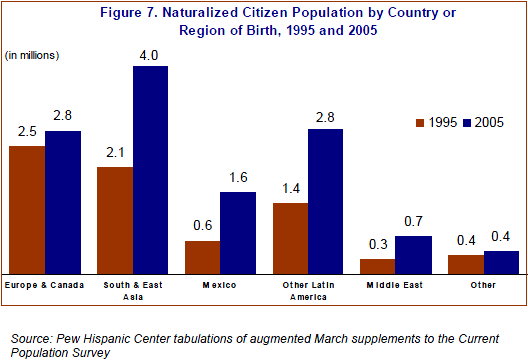 Among the major sending countries and regions, new citizens from Latin America grew the most in number, rising by nearly 2.4 million over the 10-year period. The nearly 1.6 million naturalized citizens from Mexico now outnumber those from any other single country; a decade earlier, the Philippines ranked first.

The naturalized population from Mexico grew the most rapidly of any large country or region, 144% over the decade. The new-citizen population from the Middle East rose even more sharply, 156%, but its numbers were smaller, 726,000 in 2005.

Next: V. Characteristics of Naturalized and Eligible Populations
← Prev Page
Page1Page2Page3You are reading page4Page5Page6Page7Page8Page9
Next Page →