Widely cited findings in the national exit polls suggest Latinos tilted heavily in favor of the Democrats in the 2006 election, taking back a significant portion of the support they had granted the Republicans just two years earlier. Does that mean the Latinos who flirted with the Republican Party are now firmly back in the Democratic camp? Or is it possible that Latino voters behaved like the rest of the electorate and simply rode a Democratic wave?

This year, interest in the Latino vote was driven in great part by the immigration debate and its possible effects on the election. Would Latinos punish the Republicans for the immigration position held by restrictionist hardliners in that party? Would the Democrats benefit as a result?

Exit polls, which are conducted on election day on behalf of a consortium of news organizations, can help guide the answers to these questions. And, indeed, some have looked at the numbers and concluded that the immigration debate was central to the Latino vote and that it hurt the Republican Party. But the same exit polls also indicate that the shift to the Democrats may not have been as dramatic as it seemed at first glance. And while Democrats may have benefited from the Latino vote, several prominent Republican candidates received a relatively large share of the Hispanic vote.

The 2006 national exit poll showed that in elections for the U.S. House of Representatives 69% of Latinos voted for Democrats and 30% for Republicans. An analysis of exit polls in Senate and gubernatorial races around the country that produced a national estimate revealed essentially the same partisan preference. Meanwhile, exit polls conducted in eight states with large Hispanic populations by the William C. Velazquez Institute, a non-partisan think tank, estimated that Latino voters favored Democrats 67% to 29% in congressional races nationwide.

These exit poll results suggests a very substantial gain for the Democrats this year if you compare those numbers to what the exit polls showed in the 2004 presidential race. At that time, the national exit poll showed that President George W. Bush received 44% of the Latino vote. However, serious questions have been raised about the Hispanic sample in that survey. A Pew Hispanic Center analysis of individual exit polls conducted in the 50 states and the District of Columbia, which taken together had a much larger and more representative Latino sample, showed that Bush took 40% of the Hispanic vote. (See Hispanics and the 2004 Election: Population, Electorate and Voters.)

Comparing exit polls from 2004 and 2006 suggests an 11-point swing in favor of the Democrats. Meanwhile, the swing among white voters was 6%. That suggests the movement away from the GOP was greater among Latinos than whites. The change among black voters, who consistently back Democrats by an overwhelming majority, was much more modest. The 2004-2006 comparison suggests something distinctive occurred among Latino voters this year that rewarded the Democrats and punished the Republicans.

The 2002 mid-term elections offer another point of comparison. That year, the national exit poll showed that Latinos went 61% vs. 37% in favor of the Democrats while whites split 38% to 57% in favor of the Republicans, as has been consistent in recent elections. Comparing this year’s mid-term election to the 2002 mid-term election shows that the Democratic gains among Latinos and whites were roughly similar. The 2002/2006 comparison suggests that Latino voters this year did not behave distinctively but rather reflected a broader political trend that was also evident among whites. 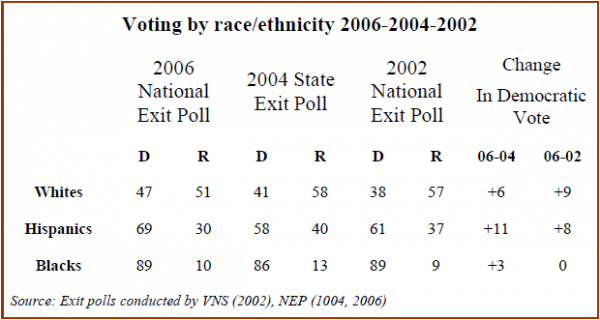 After the 2004 election, some Republican strategists argued that Bush’s strong showing among Latinos that year could lead to a political realignment that would gradually erode the Democrats long-standing two-to-one advantage in party identification among Hispanic voters. Meanwhile, other analysts contended that the 2004 election only demonstrated that, under the right circumstances, an individual Republican candidate can reduce the Democratic advantage without producing any lasting change in Hispanic voting behavior.

An analysis of exit polls in several races this year shows that some Republican candidates in states with sizeable Latino electorates significantly out performed their party’s showing on the national level and received shares of the Hispanic vote comparable to Bush in 2004. Indeed, in many cases Latinos evidently split their ballots between Democrats and Republicans.

In California, which is home to more than a quarter of all Latino voters in the country, Democrat Dianne Feinstein easily won reelection to the Senate, receiving 71% of the Latino vote. Meanwhile, Arnold Schwarzenegger, a Republican, won reelection as governor with 39% backing from Hispanics. Black voters in California proved a more reliable Democratic constituency, giving Schwarzenegger only 27%.

In Texas, Republican incumbent Kay Bailey Hutchinson won reelection to the Senate in a landslide and received 44% of the Hispanic vote. But as in California, blacks went more solidly Democratic, giving Hutchinson 26%. In Nevada, Republican Jim Gibbons won the race for governor against Democrat Dina Titus, receiving 37% of the Latino vote and just 13% of the black vote.

Arizona, where Latinos account for 17% of eligible voters, was widely viewed as a test case on voter sentiments towards immigration. Two Republican candidates for the House, Randy Graff and J.D. Hayworth, who made promises to crack down on illegal immigration the centerpiece of their campaigns, were defeated in districts that had been considered relatively safe for Republicans. Governor Janet Napolitano, a Democrat, won reelection with 67% of the Latino vote, about the same share Democrats received nationally in House races.

But amid these successes for the Democrats in Arizona, Republican Jon Kyl easily won reelection to the Senate. Kyl played a prominent role in the Senate debate over immigration policy last spring, emphasizing tougher enforcement measures and working hard against proposals that would have offered a legalization program for undocumented immigrants. He carried 41% of the Hispanic vote, according to the exit polls, a share comparable to Bush’s in the 2004 election.

As important, almost half of Latino voters (48%) in Arizona also backed the referendum that made English the state’s official language. Among all voters in Arizona, that measure drew overwhelming support from those who said illegal immigration was extremely important and from those who said illegal immigrants should be deported. Again, almost one out of every two Latinos sided with an issue that was heavily promoted by those in favor of a more restrictive immigration policy.

Impact of the Latino Vote on House and Senate Races

The Democrats scored a major victory on a national level with a net gain of 30 seats in the House of Representatives, giving them control for the first time since 1994. What role did Latino’s play in that outcome? Did the Latino 11% shift in favor of the Democrats help swing the tide in key races?

One way to assess the impact of Latinos’ shift in favor of the Democrats is to look at closely contested congressional districts. There were 75 congressional races where the winner received 55% of the vote or less, but most of those took place in districts where Latinos are a small share of the electorate. Thus, simple geography greatly limited the potential impact of the Hispanic vote.

Latinos made up 10% or more of the eligible voters in only 12 of these 75 races and were more than 20% in only one. Republican incumbents prevailed in 8 of the 12 close races in which Latinos conceivably could have played a decisive role. Among these was the one closely-contested race in which Latinos represented a sizeable share of the electorate. In New Mexico’s 1st district, where Hispanics made up 38% of the eligible voters, Heather Wilson, the Republican incumbent, narrowly defeated Patricia Madrid, the state’s attorney general and a Hispanic.

In sum, close races in which Latinos made up 10% or more of the electorate produced a net gain of four seats for the Democrats.

Another way of assessing the impact of the Latino vote is to look at the 30 House seats picked up by the Democrats. Geography again limited the Hispanic role. On average, Latinos make up 4.5% of the eligible voters in those 30 districts. In 18 of the turnover districts Latinos made up less than 2% of the electorate. Latinos made up 10% or more of the voters in four districts that produced a net Democratic gain, the same four districts decided in close races noted above.

Finally, the impact of the Latino vote can be assessed by examining the outcome in Congressional districts with large shares of Hispanic eligible voters. This year Latinos made up 30% or more of the eligible voters in 35 districts. The Hispanic share of eligible voters in those districts ranged from 31% to 75% of the total, so a substantial swing among those Latino voters could have a decisive impact. More than a third (36%) of all Latino voters live in those districts. Again the impact was reduced by geography and the nature of the congressional redistricting process, which tends favors incumbents and often concentrates minority voters in relatively few districts. Democratic incumbents carried 28 of those races and Republican incumbents won the remaining 7. The 35 districts with the densest concentrations of Latino voters did not produce any turnover of seats in the House.

The 60 Congressional districts with the largest concentrations of Hispanic voters show the same result. These districts, which are home to half of all Latino voters, did not produce any turnover of seats.

Among other closely watched Senate races, Latinos are a sizeable presence only in Connecticut and New Jersey.

In Connecticut, where Hispanics are 7.7% of all voters, the exit polls showed Hispanics favoring Ned Lamont, the Democratic nominee, by 58% to 32% over Joe Lieberman, the Democratic incumbent who ran as an independent after losing the Democratic primary. Lieberman won the election with a 10-point margin.
In New Jersey, where Hispanics are 10.2% of all eligible voters, the exit polls showed Hispanics favoring Robert Menendez, the Democratic incumbent, by 71% to 28% over the Republican candidate, Thomas Kean, Jr. In contrast, Sen. John Kerry took 56% of the Latino vote in New Jersey in his 2004 presidential campaign. After a hard fought campaign, Menendez won handily, 53% to 45%.

How many Latinos voted?

Determining how many Latinos turned out to vote and comparing levels of participation from one election to another is complicated. Latinos made up 8.6% of the nation’s eligible voters this year, according to the Center’s estimates. (See Hispanics and the 2006 Election.) That is a small enough share of the total vote that a relatively small deviation in the way turnout is allocated among various racial and ethnic groups could produce a very substantial shift in the number of ballots cast by Latino voters.

For example, a margin of error of plus or minus 1.5% in the race/ethnic allocation of votes in the 2004 presidential election would produce a range of estimates for Latino turnout of roughly between 5.7 million and 9.5 million votes. Exit polls also offer varying estimates of the distribution of votes along racial and ethnic lines. In 2004, the national exit poll showed that Latinos accounted for 8.4% of the vote while the state exit polls placed the estimate at 7.5%.

This year, the national exit poll calculated that Hispanics accounted for 8% of all votes cast in elections for the House of Representatives. Meanwhile, the William C. Velazquez Institute surveys estimated the Latino turnout was 6.2% of the total. Further analysis may show that there is a reliable estimate to be drawn somewhere between those two numbers, but at this writing it is very difficult to calculate with confidence how many votes were cast by Latinos.

The 2002 and 2004 Mid-term ElectionsThe Latino SplitImpact of the Latino Vote on House and Senate RacesHow many Latinos voted?