The survey shows that Mexicans maintain close relations to their home country. A significant majority follows the news from Mexico, primarily through Spanish-language media. About a third of those polled said they had traveled to their home country in the past year, almost six out of ten said they had sent money to relatives and about eight out of 10 said they placed a call to family in Mexico at least once a month. There were some differences between those who were eligible to vote in the elections and those who had not registered, but generally most Mexicans in the U.S. revealed a significant connection to their native countries and their interest was focused on their families.

Remittances, or the money sent to Mexico by those abroad, are one way to measure ties to home. According to the Bank of Mexico, more than $20 billion in family remittances were received in Mexico in 2005. The survey showed that 58 percent of Mexicans in the U.S. said they had sent money over the past year. Of these, a third said they sent money at least once a month and about six out of ten said they had sent money several times in the past year. Mexicans who said they were eligible to vote were slightly more likely to say they sent money in the past year (65 percent) than those who were not registered to vote (55 percent).

Interest in news from Mexico is high among Mexicans in the U.S., regardless of whether they were eligible to vote or not. A significant majority said they get their news from television (87 percent) and most often from Spanish-language television. Asked how closely they follow news from Mexico, about seven out of ten said they followed it very closely or somewhat closely. However, as noted earlier, when were asked what year the next presidential election would be held, 55 percent said they did not know or answered incorrectly.

A relatively small share (10%) said they belonged to a civic organization, sports team or social club of people from Mexico, and there was no significant difference in this regard between those who are eligible voters and those who are not.

Nearly half (46%) of Mexicans in the U.S. have a matrícula consular, a photographic identity card issued by Mexican consulates that verifies the holder’s residential address in the United States. 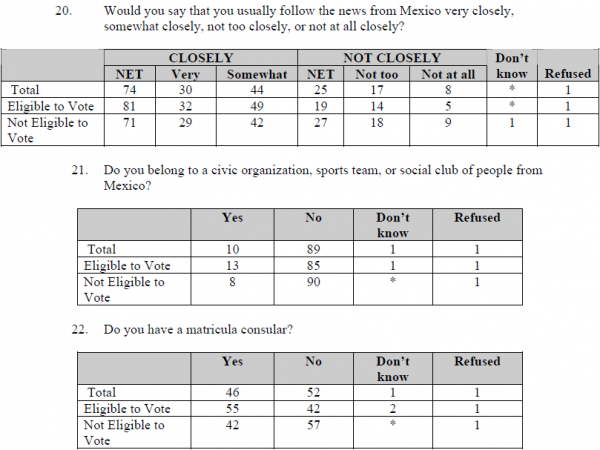 Next: VI. Views on Mexican Politics and the Election
← Prev Page
Page1Page2Page3Page4You are reading page5Page6Page7Page8Page9
Next Page →