Data collection was conducted at Mexican consulates in Los Angeles, New York, Chicago, Atlanta, Dallas, Raleigh, and Fresno from July 12, 2004, to Jan. 28, 2005. In each location, data collection was conducted for five or 10 business days, depending on the estimated size of the target population in each city. In most cases, applicants for a matrícula consular are guided through a series of stations, where documents are examined, applications are submitted, photos are taken, etc. Depending on the number of applicants, the efficiency of the work flow and conditions at the consulate, the applicants could spend anywhere from 20 minutes to four hours at the consulate during their visit. In some locations, the matrícula applicants were concentrated in one room or area, while in other locations applicants for all types of documents were in one line or area. Therefore, recruiting only those who were applying for the matrícula consular was a primary concern. This was usually achieved by asking potential participants to identify themselves as matrícula applicants. Only respondents who replied affirmatively to the first question on the survey, asking if they were applying for a matrícula consular that day, were included in the survey data. Respondents were not asked for their names or any other identifying information at any point in the process.

Potential respondents were informed that they were eligible to participate in the survey using public announcements (with or without microphone, depending on the facilities) and individual recruitment. They were asked to fill out the survey while waiting in line to conduct their transaction or while waiting to pick up their newly obtained identity card. The participants received a verbal explanation regarding the survey, its content, the nature of the questions and the length of time needed to fill out the survey, as well as a detailed explanation of the anonymity and confidentiality of their responses. In addition, they were verbally informed that upon completion of the survey, they would receive a phone card which could be used to telephone Mexico as a token of gratitude for their time and patience. Potential participants were also given a detailed information sheet that explained more fully the purpose and implications of the survey. Both during the recruitment process and on the information sheet potential participants were advised that their dealings with the consulate would not be affected in any way by their decision whether to take the survey or not or by their responses.

Those who expressed an interest in participating in the survey and were of age had the choice of self-administering the survey independently or having an interviewer read out the questions and fill in the questionnaire for them. Because the targeted sample is characterized by a high rate of illiteracy, special attention was paid to the potentially illiterate or semi-literate people in the sample by emphasizing that reading and writing was not a prerequisite to participation and that interviewers were available to provide assistance and to conduct as much of the survey as necessary.

The survey was conducted under the auspices of the University of Southern California Annenberg School for Communication and was subject to the university’s regulations on human subject research. Respondents were advised of their rights under these regulations and were given phone numbers where they could call to register complaints or note any concerns about the conduct of the survey.

Completed survey forms were marked as such and numbered per day. In addition, all completed surveys were checked in the field for any open-ended comments. Responses and all other handwritten text were translated into English for future coding and data entry. The translations were written underneath or in proximity to the original handwritten comment and placed in parentheses to distinguish the translation from the subject’s comments.

Each day’s completed survey forms were then sent to the offices of International Communications Research (ICR) in Media, PA, where data entry was conducted and a database established. The completed surveys are stored at ICR using procedures that accord with university regulations for maintaining the confidentiality and security of the data.

Neither the U.S. Census Bureau nor any other U.S. government agency conducts a count of unauthorized migrants or defines their demographic characteristics based on specific enumeration. There is, however, a widely accepted methodology for estimating the size and certain characteristics, such as age and gender, of the undocumented population based on census and survey data. This methodology essentially subtracts the estimated legal-immigrant population from the total foreign-born population and treats the residual as a source of data on the unauthorized migrant population (Passel et al. 2004; Lowell and Suro 2002; Bean 2001).

Using this methodology, Jeffrey S. Passel, a veteran demographer and a senior research associate at the Pew Hispanic Center, has developed estimates based on the March supplement of Current Population Survey (CPS) in 2003, the U.S. Census Bureau’s annual effort to measure the foreign-born population and provide detailed information on its characteristics. Comparing the sample from the Survey of Mexican Migrants with these estimates demonstrates significant similarities with the estimated characteristics of the undocumented population. 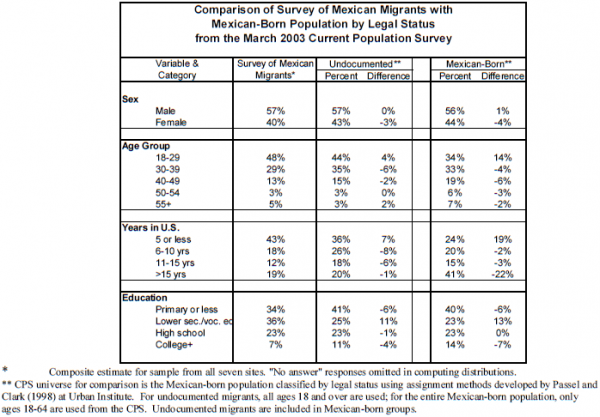