In the countries surveyed, people generally agree that it is important to take other countries’ interests into account when dealing with major international issues, even if it means making compromises.

A median of 58% agree that their country should take other countries’ interests into account. Clear majorities hold this view in 10 of the 14 countries polled, including the U.S., while opinion is more divided in Italy and Denmark. There is less support for international compromise in Australia (41%) and Japan (39%), where half or more say that their country should follow its own interests when dealing with international concerns. 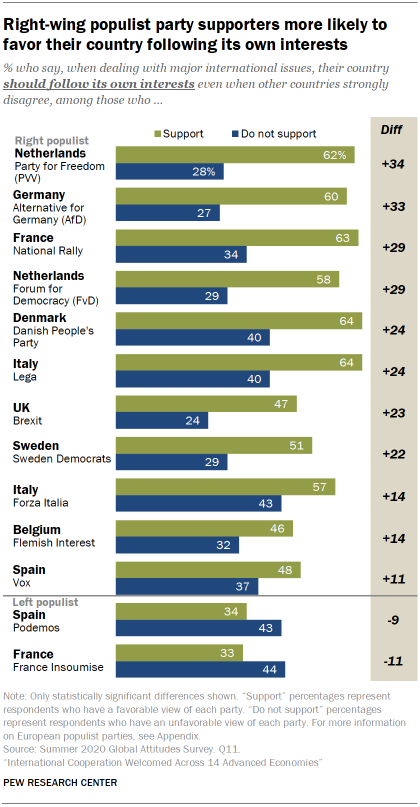 In every European country surveyed, those with favorable views of right-wing populist parties are much more likely to say their country should follow its own interests even when other nations disagree. (See the appendix for more information on European populist parties.)

The opposite pattern is present among those with favorable views of the two left-wing populist parties included in the survey: Spain’s Podemos and France’s La France Insoumise. In both cases, supporters of each party are less likely to favor their countries following their own interests even when facing international disagreement.

In the U.S., about two-thirds of Republicans and Republican-leaning independents (68%) say the U.S. should follow its own interests, while 19% of Democrats and Democratic leaners say the same. 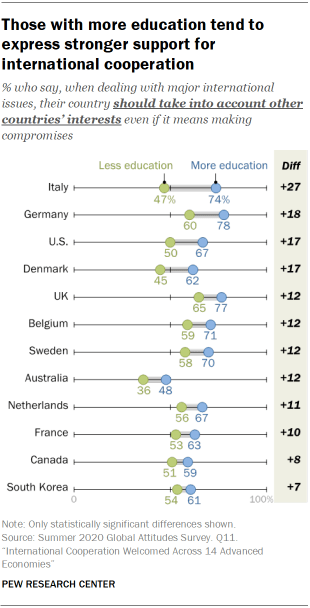 And in nearly all the countries surveyed, those with more education are more likely to support cooperation with other countries than those with less education, even if it means compromise.1 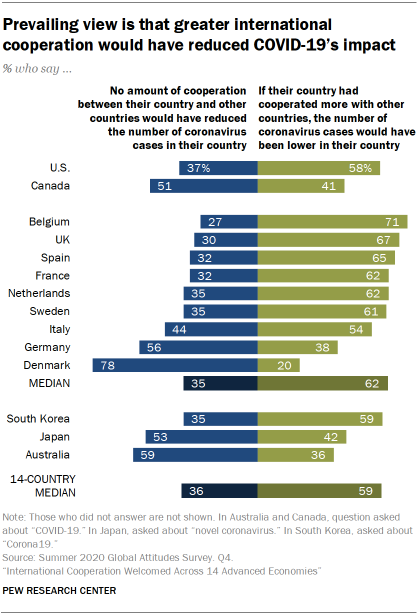 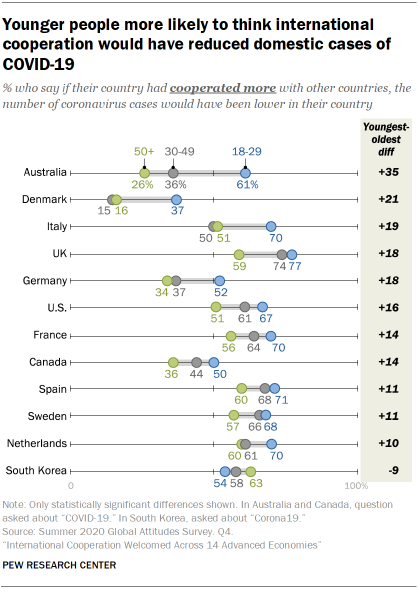 In most countries polled, those ages 18 to 29 are more likely than those 50 and older to say that more cooperation with other countries would have reduced the number of domestic coronavirus cases. In Australia, for example, about six-in-ten (61%) of those ages 18 to 29 hold this view, compared with about a quarter (26%) of their older counterparts. Younger people are also more likely than older adults to say this in 10 additional countries.

However, 63% of older South Koreans say international cooperation would have improved the domestic situation, compared with 54% of those ages 18 to 29.

In 2019, Pew Research Center asked whether cooperation or competition should define the way countries interact on the international stage. Strong majorities consistently favored nation-states acting as members of a global community that works together to solve problems. A median of 81% across 12 countries supported this approach, while 17% said countries should act as independent nations that compete with others and pursue their own interests.

In each of the 12 countries surveyed, large majorities preferred international cooperation. And in no country did more than one-in-five prefer a world of competing states that pursue their own interests. 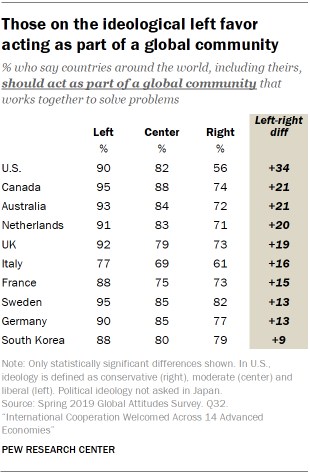 In almost every one of the 12 countries, those who place themselves on the ideological left were more likely to say countries should act as part of a global community than those on the ideological right. This divide was particularly large in the U.S.: 90% of liberals favored acting as part of a global community, compared with 56% of conservatives, a difference of 34 percentage points. In the U.S., ideology was defined as conservative (right), moderate (center) and liberal (left).