Home Research Topics International Affairs Organizations, Alliances & Treaties
How we did this

This analysis focuses on cross-national views of multilateral principles, views of the United Nations, characteristics of how the UN carries out its mission and ratings for how the World Health Organization has handled the coronavirus outbreak. The work builds on previous studies released in the fall of 2020 on national responses to COVID-19, views of the economic situation in each country, perceived global threats and the international image of the United States.

For this report, we use data from nationally representative surveys of 14,276 adults from June 10 to Aug. 3, 2020, in 14 advanced economies. All surveys were conducted over the phone with adults in the U.S., Canada, Belgium, Denmark, France, Germany, Italy, the Netherlands, Spain, Sweden, the United Kingdom, Australia, Japan and South Korea.

A Pew Research Center survey of 14,276 people across 14 countries conducted in summer 2020 finds that many believe greater global cooperation could have reduced the human toll from COVID-19. The same poll reveals strong support for taking the interests of other countries into account even if this requires compromise. These findings are in line with a pre-coronavirus 2019 Pew Research Center survey in 12 of the same 14 countries that showed robust public support for the idea of nations cooperating, rather than competing, on the world stage. 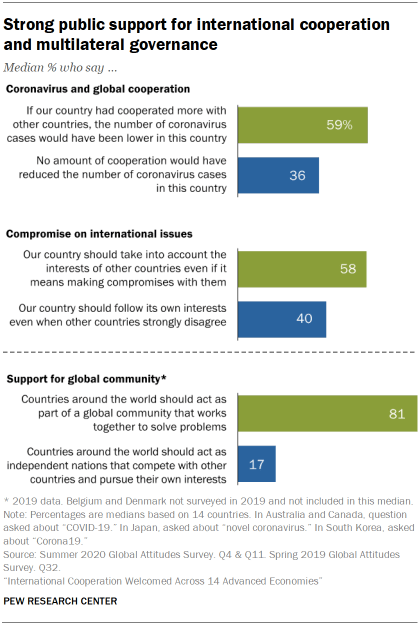 Publics in the 14 countries surveyed this past summer generally hold favorable opinions of the United Nations. Young people and those with a college education are even more likely to approve – a pattern consistent with past surveys by the Center in which younger, more educated adults were more supportive of multilateral organizations and cooperation. 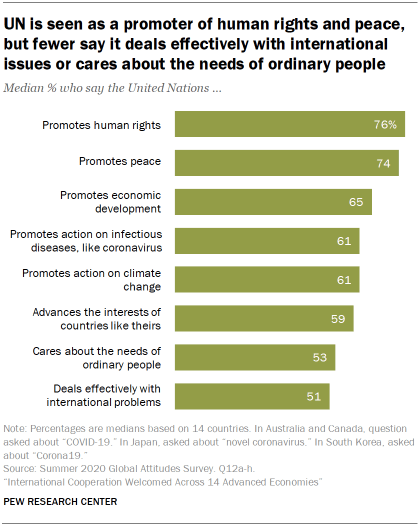 In the countries surveyed, the UN is typically given high marks for fulfilling its core mission of promoting peace and human rights. And for the most part, people say the 75-year-old organization does a good job of promoting economic development, the fight against infectious diseases like COVID-19 and action on climate change.

Publics in the 14 countries polled are less certain that the UN cares about the needs of ordinary people or that it is effective in actually solving international problems.

This last pair of findings is in line with past Pew Research Center surveys, which have demonstrated that while people tend to view multilateral organizations like the European Union and NATO favorably, doubts about these institutions persist. For example, many Europeans feel the EU does not understand the needs of its citizens and are reluctant to fulfill their country’s Article 5 obligations as NATO members.

In contrast to the mixed view of the UN’s overall effectiveness, more people in the surveyed countries express satisfaction with how the World Health Organization (WHO) has handled the coronavirus pandemic: A median of 63% say the multilateral institution has done a good job dealing with the COVID-19 crisis. Younger adults are particularly likely to hold this view. 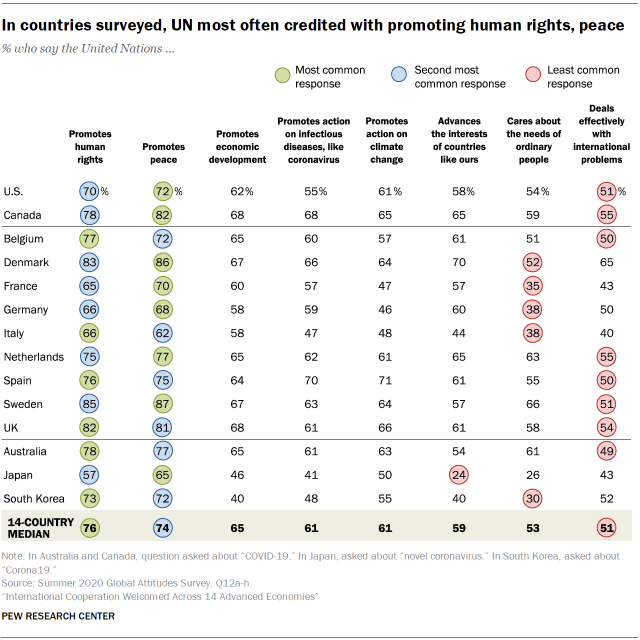 The survey of adults was conducted by telephone between June 10 and Aug. 3, 2020, in Australia, Belgium, Canada, Denmark, France, Germany, Italy, Japan, the Netherlands, South Korea, Spain, Sweden, the United Kingdom and the United States. 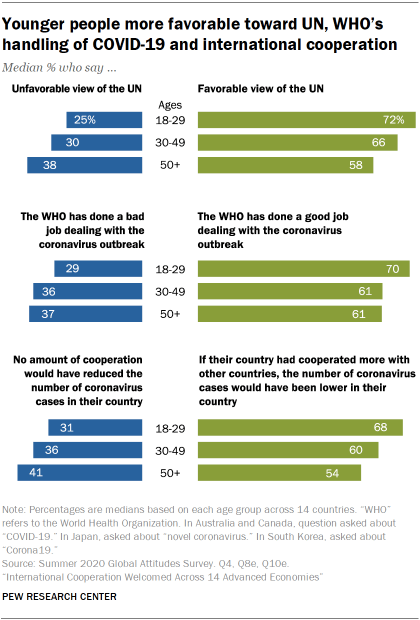 In addition to the general findings already described, the 14-country survey reveals important differences by age, with younger adults (ages 18 to 29) more favorably inclined toward the UN and WHO as well as toward international cooperation in general. Among this cohort, 72% say they have a positive view of the UN, compared with 58% among those 50 and older. Age gaps also appear in support for the principle of cooperation between countries to manage the COVID-19 pandemic and for the WHO’s handling of the pandemic.

Educational attainment is also related to attitudes toward multilateral institutions and cooperation with other countries. In half or more of the countries surveyed, those with a postsecondary education are also more likely to have a positive evaluation of the UN and its promotion of human rights and peace. They are also more likely than those with less education to support international cooperation to solve major issues, even if it requires compromise. 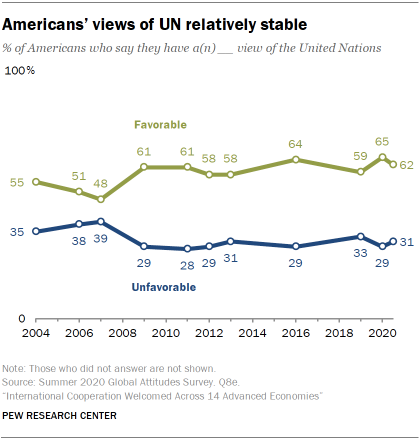 The U.S. is the largest government funder of the United Nations, contributing over $10 billion in 2018. This accounted for roughly 18% of the total UN revenue that year.

Americans are more favorable toward the UN than not: 62% have a positive view, while 31% have a negative view. The U.S. public’s views of the organization have been relatively consistent in recent years. Still, there has been a large upward shift in approval from 2007, when 48% of Americans had a favorable view of the UN.

Large partisan differences are found across several questions regarding multilateralism. Democrats and those who lean to the Democratic Party are much more likely to have a positive view of international cooperation and organizations than Republicans and those who lean Republican. For example, 83% of Democrats and Democratic leaners say that if the U.S. had cooperated more with other countries, the number of domestic COVID-19 cases would have been lower, compared with just 27% of Republicans and Republican leaners who say the same.

And 78% of Democrats say that the U.S. should take the interests of other countries into account when making foreign policy, compared with only 31% of Republicans who say the same. 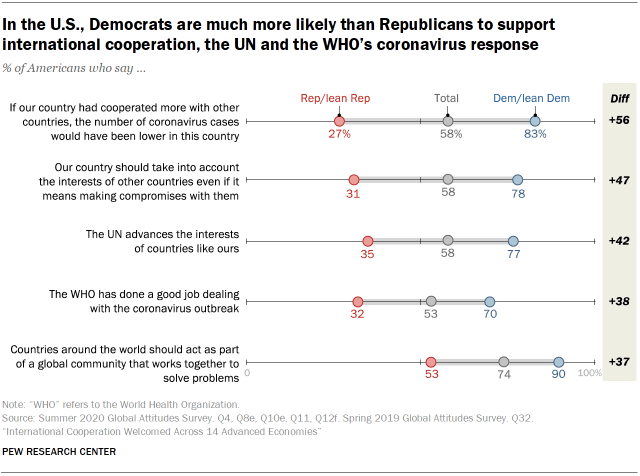 While Americans’ views of the UN have remained generally stable overall since 2007, Democrats and Republicans consistently express differing views about the organization, and the size of the partisan gap has increased over time. This year, for example, 85% of Democrats are positive on the UN, compared with just 39% of Republicans, a difference of 46 percentage points. 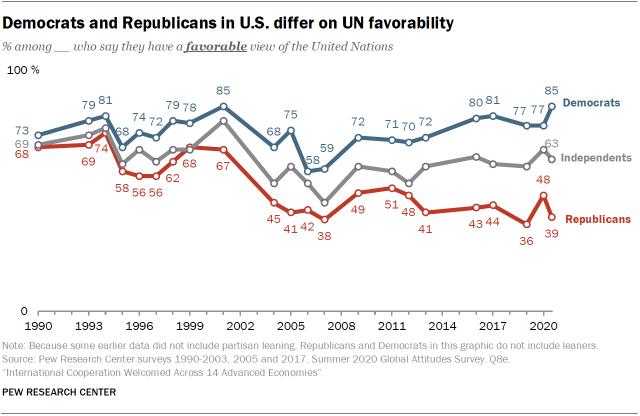 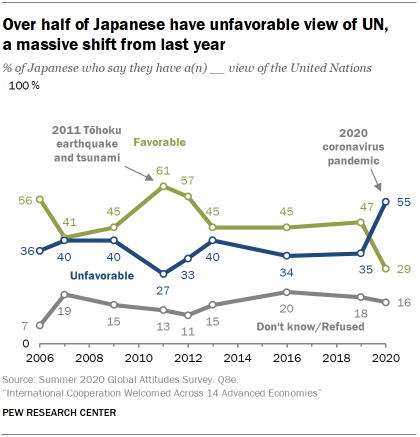 The Japanese public stands out as the most unfavorable toward the UN among all countries surveyed in 2020. A majority (55%) express a negative sentiment with the organization, up 20 percentage points from 2019 and the highest share since this question was first asked in 2006.

Favorable views of the UN in Japan reached their peak in 2011. That year, 61% rated the organization positively in the aftermath of the Tōhoku earthquake and tsunami, a period during which the UN provided disaster relief to Japan.

When evaluating several specific UN functions, only about a quarter say the UN advances the interests of countries like Japan or cares about the needs of ordinary people. And only 41% say the UN was effective in promoting action on the spread of the coronavirus. These are the lowest marks on these UN characteristics across the 14 countries surveyed. 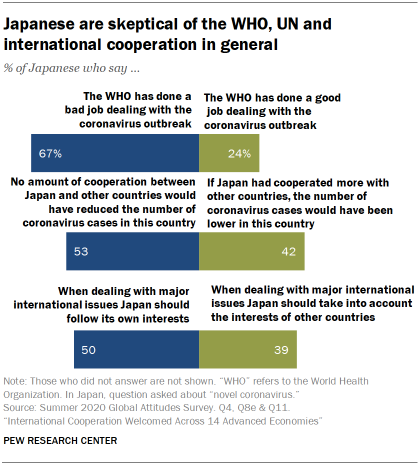 Japanese tend to be more skeptical than other publics on the tenets of the multilateral system and the WHO’s handling of the pandemic.

Two-thirds of the Japanese public say that the WHO has done a bad job dealing with the coronavirus outbreak, while a majority holds the view that their own country has done a good job handling the virus.

About half in Japan (53%) express the view that no amount of international cooperation would have reduced the number of domestic coronavirus cases. 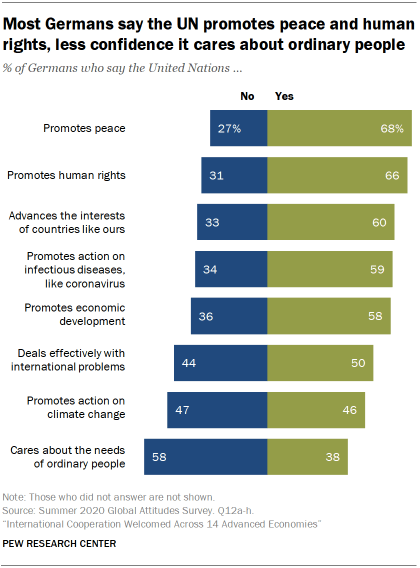 Germans are generally supportive of the principles of multilateralism, the UN itself and the leadership of the WHO amid the coronavirus pandemic. Majorities in Germany think their country should act as part of an international community and say their country should take into account the interests of other countries.

But while many people in Germany say the WHO handled the outbreak well, they are skeptical that more cooperation between countries would have reduced the number of coronavirus cases within their own country; about four-in-ten hold this view. Overall, nearly nine-in-ten Germans (88%) say the country has done a good job dealing with the outbreak.

And although 61% of Germans have a favorable view of the UN, they share some skepticism about the organization’s care for ordinary citizens and its handling of climate change. A majority of Germans say the UN does not care about the needs of ordinary people, and 47% think it does not promote action on climate change, an issue that ranks as Germany’s top international concern.

Next: 1. Views on international cooperation
← Prev Page
You are reading page1Page2Page3Page4Page5Page6Page7
Next Page →