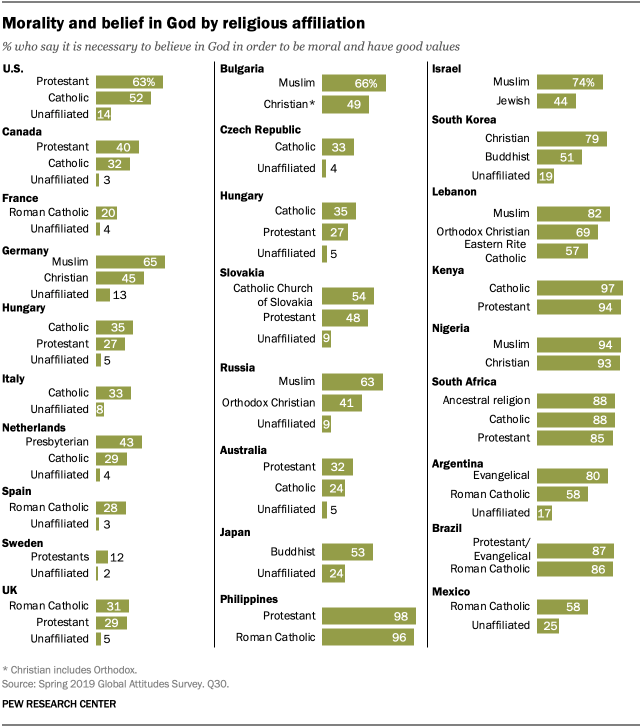 There are differences by religious affiliation in many countries on whether it is necessary to believe in God in order to be moral and have good values.

While majorities in three of Lebanon’s largest religious groups (Muslims, Orthodox Christians and Eastern Rite Catholics) see belief in God as essential to be moral, a larger majority of Lebanese Muslims (82%) than Eastern Rite Catholics (57%) share this view. Additionally, there are large differences by religion in Israel. Over seven-in-ten Muslims in the country say it is necessary to believe in God to have good values, while only 44% of Jewish respondents say the same.

Respondents in the three African countries surveyed say that belief in God is important for morals and values, regardless of religious affiliation. In Nigeria, similar shares of Christians (93%) and Muslims (94%) say belief in God is necessary to be moral and have good values. This pattern holds in Kenya, where similar shares of Protestants and Catholics (94% and 97%, respectively) share this view. In South Africa, 85% of Protestants and 88% of both Catholics and those of traditional African or ancestral religions say it is necessary.

Next: Appendix B: Economic categorization
← Prev Page
Page1Page2Page3You are reading page4Page5
Next Page →

The Global God Divide Acknowledgments Methodology
Appendix A: Connection between God and morality by religious affiliation
Appendix B: Economic categorization