Data for this report on public opinion in Taiwan is drawn from a telephone survey of 1,562 respondents conducted Oct. 16 to Nov. 30, 2019, representative of the adult population of Taiwan. Fieldwork was completed prior to the January presidential election and the start of the coronavirus outbreak in mainland China. The report also contains comparative data points from six Asia-Pacific countries: Australia, India, Indonesia, Japan, the Philippines and South Korea. This data comes from the 2019 Global Attitudes Survey of 7,778 adults conducted from May 18 to Oct. 2, 2019. The surveys were conducted on the phone in Australia, Japan and South Korea and face-to-face in India, Indonesia and the Philippines. 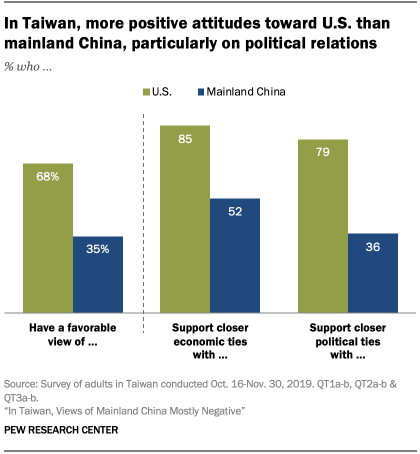 Last fall, as the United States Senate unanimously passed the first round of the TAIPEI Act – legislation aimed at strengthening U.S. support for Taiwan’s global standing and diplomatic ties with other nations – the Taiwan public overwhelmingly supported closer economic and political ties with the U.S., according to a Pew Research Center survey.

Part of this story relates to political and national identity. Those who align with Taiwan’s incumbent Democratic Progressive Party (DPP), which asserts that there is a Taiwanese national identity separate from Chinese identity, show more support for increased ties with the U.S. than with Beijing. Supporters of the Kuomintang (KMT), the opposition party that ruled Taiwan for decades prior to 2000 and favors closer relations with the mainland, favor mainland China. Many in Taiwan do not feel particularly close to any major political party, however, and among this group positive feelings for the U.S. are much stronger than favorable attitudes toward mainland China. 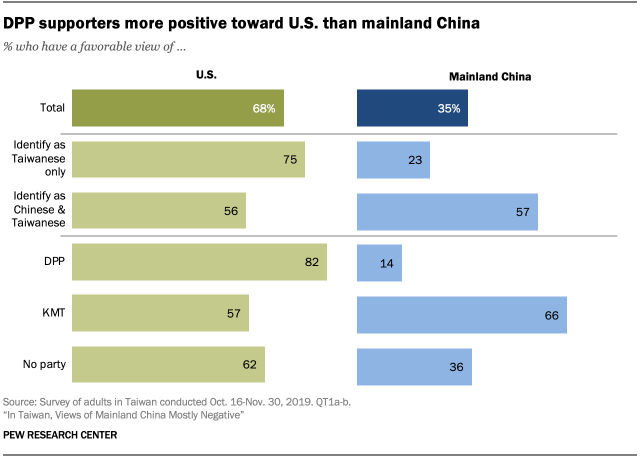 Among those who identify solely as Taiwanese, there is little enthusiasm about the mainland. Favorable views of the U.S. among this group are three times higher than toward mainland China (75% vs. 23%). But, among those who identify as both Chinese and Taiwanese, majorities have favorable views of both the U.S. and mainland China. 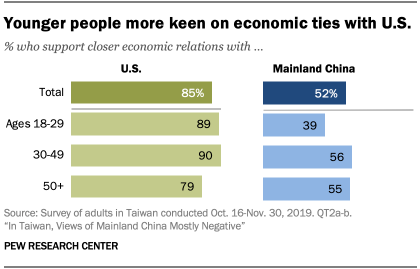 These are among the major findings of a Pew Research Center survey of 1,562 adults conducted in Taiwan from Oct. 16 to Nov. 30, 2019, prior to Taiwan’s general elections, in which the DPP’s Tsai Ing-wen was reelected president. Fieldwork also predates the outbreak of the coronavirus global pandemic. Additionally, this analysis includes results from Pew Research Center’s spring 2019 Global Attitudes Survey, conducted among 7,778 adults in six Asia-Pacific nations from May 18 to Oct. 2, 2019. 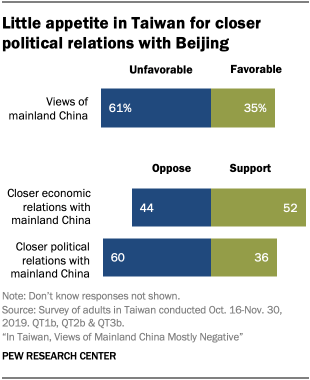 The prospects of closer political relations are much less popular. Roughly a third (36%) support closer collaboration with Beijing, while about six-in-ten oppose.

These opinions are in part related to partisan identification, age and whether people identify solely as Taiwanese. Those who feel closest to the Democratic Progressive Party (DPP) – Taiwan’s liberal ruling party that takes a stronger pro-independence stance – hold much less positive views than do those who are partial to the Kuomintang (KMT), Taiwan’s more conservative opposition party that advocates for friendlier relations with mainland China. In fact, those who most identify with the KMT hold favorable opinions toward mainland China at more than four times the rate of those who feel closest to the DPP. Among people who report feeling no strong affiliation with any political party, just 36% have favorable views of mainland China. 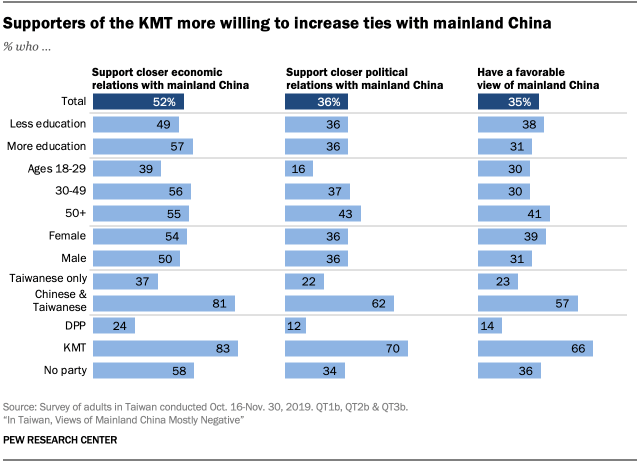 Opinions differ by age, national identification and political party when it comes to closer relations with mainland China. Younger people (ages 18 to 29) are less likely than their older counterparts to support closer economic or political ties. Those who consider themselves both Taiwanese and Chinese offer much more support (81%) for closer economic ties than those who feel only Taiwanese (37%); the gap in smaller on the idea of closer Taipei-Beijing political relations (62% vs. 22%, respectively).

Party affiliation also plays a role: More than eight-in-ten KMT supporters feel positively about closer cross-strait economic ties, but just about a quarter of DPP backers share this sentiment. A majority of those who do not feel close to any party welcome the idea of greater Taiwan-mainland economic relations. Seven-in-ten of those who feel an affinity for the KMT (a party that has traditionally encouraged closer ties to mainland China) embrace the idea of closer political ties with Beijing, compared with 34% of those who don’t favor any Taiwanese political party; just 12% of DPP adherents want to see more political connectedness with the mainland. 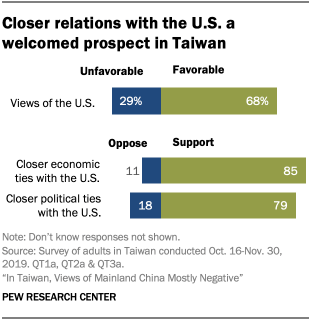 In stark contrast with China, the United States is seen quite favorably by adults in Taiwan. Nearly seven-in-ten say they hold favorable views of the U.S., while just about three-in-ten have negative opinions, much more positive than views toward mainland China.

More in Taiwan support closer economic ties with the U.S. than with China. Fully 85% favor more U.S.-Taiwan economic relations, while just 11% do not. When it comes to closer political ties, people in Taiwan largely welcome the prospect of more dealings with Washington, with about eight-in-ten endorsing this idea.

Support for closer economic and political ties with the U.S. prevails across most demographic groups in Taiwan. About three-quarters or more in each group analyzed are in favor of increased economic relations with the United States. The largest variation is in party affiliation: Those who feel closest to the KMT are less likely than DPP supporters to want more U.S.-Taiwan economic dealings. Those younger than 50 and those with more education offer more approval of strengthening the economic relationship than those ages 50 and older and those with less education. Still, roughly eight-in-ten or more across age and education levels support greater economic ties. Those who consider themselves Taiwanese are also more likely than those who feel both Chinese and Taiwanese to want stronger economic relations with the U.S. 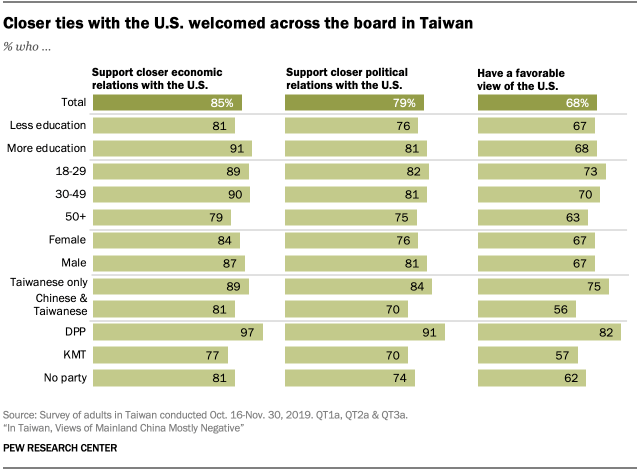 Likewise, most adults in Taiwan would welcome closer political ties with the United States. Nearly eight-in-ten overall support more Taipei-Washington political interactions, and at least seven-in-ten or more in each of the groups analyzed say they would favor more bilateral political relations. The highest level of enthusiasm for this comes from those who support the DPP (91%), those who identify solely as Taiwanese (84%) and those ages 18 to 29 (82%).

Taiwan’s views of the U.S. and China compared with others in the Asia-Pacific 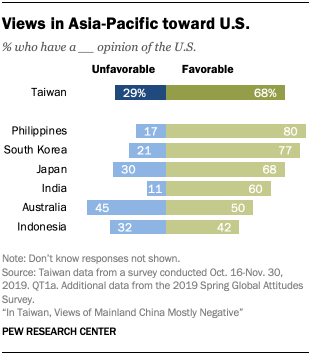 Views of the U.S. in Taiwan echo the views in six countries in the Asia-Pacific region included in a separate 2019 Pew Research Center survey. Around seven-in-ten or more hold favorable attitudes toward the U.S. in the Philippines, South Korea, Taiwan and Japan. Australians offer more tempered views, though half still hold the U.S. in a positive regard. More in India and Indonesia have favorable than unfavorable assessments, though sizable portions do not offer an opinion.

As in Taiwan, younger adults in Japan, South Korea, India and Indonesia are more likely to hold a favorable view of the U.S.1 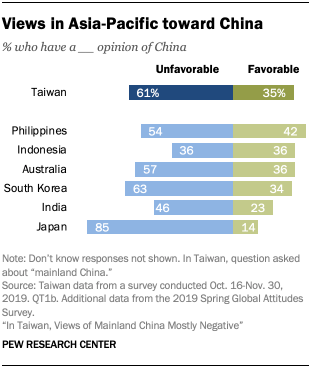 While global views of China are somewhat mixed, attitudes throughout much of the Asia-Pacific – including Taiwan – tend to be more negative. Like in Taiwan, only about a third of Filipino, Indonesian, Australian and South Korean adults hold positive opinions of China.2 Though 23% of Indians share this view, a sizable percentage do not answer this question. 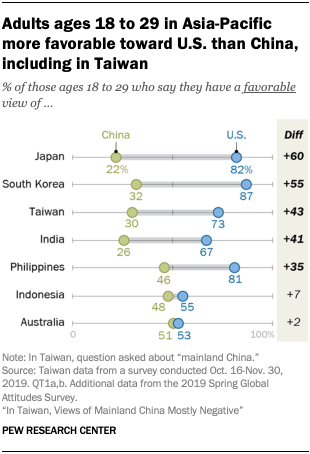 Younger people in particular tend to have more favorable views of the U.S. than China. For example, most Japanese ages 18 to 29 (82%) have a positive opinion of the U.S., while just 22% say the same of China – a 60-point difference. In Taiwan, this difference among young people is 43 percentage points.

Most in Taiwan see themselves as Taiwanese 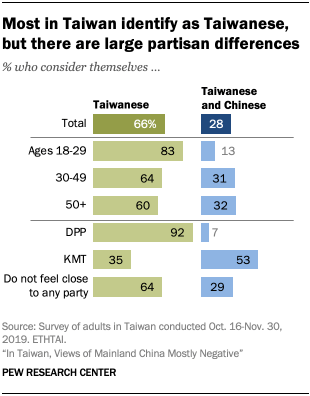 Seventy years after the end of the Chinese Civil War, about two-thirds of adults in Taiwan identify as just Taiwanese. On the other hand, about three-in-ten (28%) see themselves as both Taiwanese and Chinese. The question asks respondents whether they consider themselves Taiwanese, Chinese or both. A mere 4% see themselves as only Chinese. These findings are consistent with other polls showing that people in Taiwan increasingly identify only as Taiwanese as opposed to both Taiwanese and Chinese or solely Chinese. 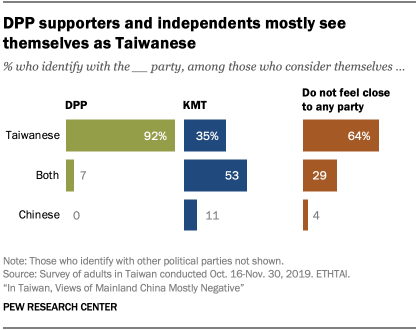 National identity is additionally split across political affiliation. Those who feel closest to the DPP are most likely to see themselves as Taiwanese. Roughly two-thirds of the politically unaffiliated – those who do not feel close to any party – are also most likely to identify as just Taiwanese, while about three-in-ten consider themselves both Taiwanese and Chinese. Those who identify with the KMT are more likely to say they are both Taiwanese and Chinese than just Taiwanese. Still, about a third of this group identifies as only Taiwanese. No more than about one-in-ten in each political group see themselves as only Chinese.

In Taiwan, Views of Mainland China Mostly Negative
While many in Taiwan welcome greater economic relations with Beijing, few support closer political ties with mainland ChinaPeople in Taiwan give U.S. positive marks, support closer bilateral tiesTaiwan’s views of the U.S. and China compared with others in the Asia-PacificMost in Taiwan see themselves as Taiwanese
Acknowledgments Methodology

3. U.S. image generally favorable around the world, but mixed in some countries

1. Views of the balance of power between U.S. and China