Unauthorized immigrants residing in Europe in 2017 were from a diverse set of origin countries, had lived in Europe for a relatively short period of time and were relatively young. More than half were male. 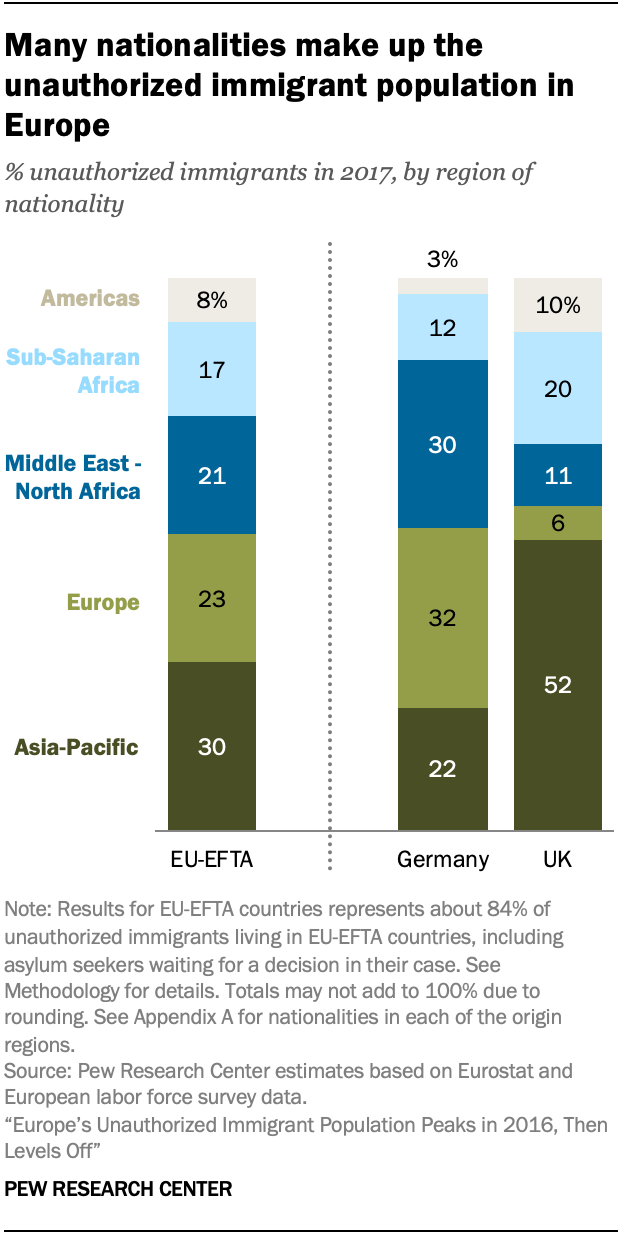 The unauthorized immigrant population of EU and European Free Trade Association countries comes from around the world. Three-in-ten unauthorized immigrants in 2017 were estimated to be from Asia-Pacific countries, including Afghanistan and Pakistan, while an estimated 23% were from European countries outside of the EU and European Free Trade Association, including Russia and Turkey.4 Some 21% were from countries in the Middle East-North Africa region such as Syria and Iraq. Meanwhile, 17% were from sub-Saharan African countries such as Nigeria and Eritrea, and 8% were from countries in the Americas.

In Germany, an estimated third (32%) of unauthorized immigrants in 2017 had European nationalities of non-EU-EFTA countries. Another three-in-ten (30%) were from Middle East-North Africa region countries, and close to a quarter (22%) were from countries in the Asia-Pacific region. 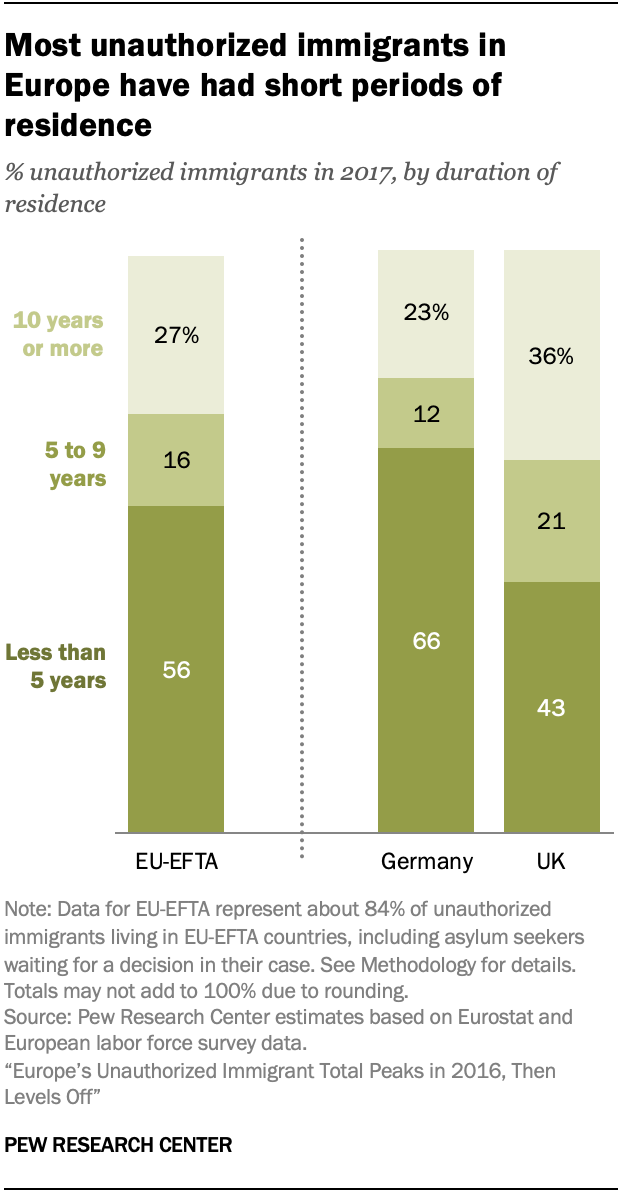 In 2017, more than half (56%) of Europe’s unauthorized immigrants are estimated to have lived in their country of residence for less than five years. Almost half of these shorter-term residents were asylum seekers waiting for decisions on their applications.

Another estimated 16% of unauthorized immigrants in Europe in 2017 had lived in their country of residence between five and nine years, while 27% had lived there 10 years or longer.

By comparison, most unauthorized immigrants in the U.S. in 2017 were much more settled, with longer periods of residence. The majority, or about two-thirds (65%), had lived in the U.S. 10 years or longer, 15% for five to nine years, and 20% for less than five years.

More than half of unauthorized immigrants in Europe are male 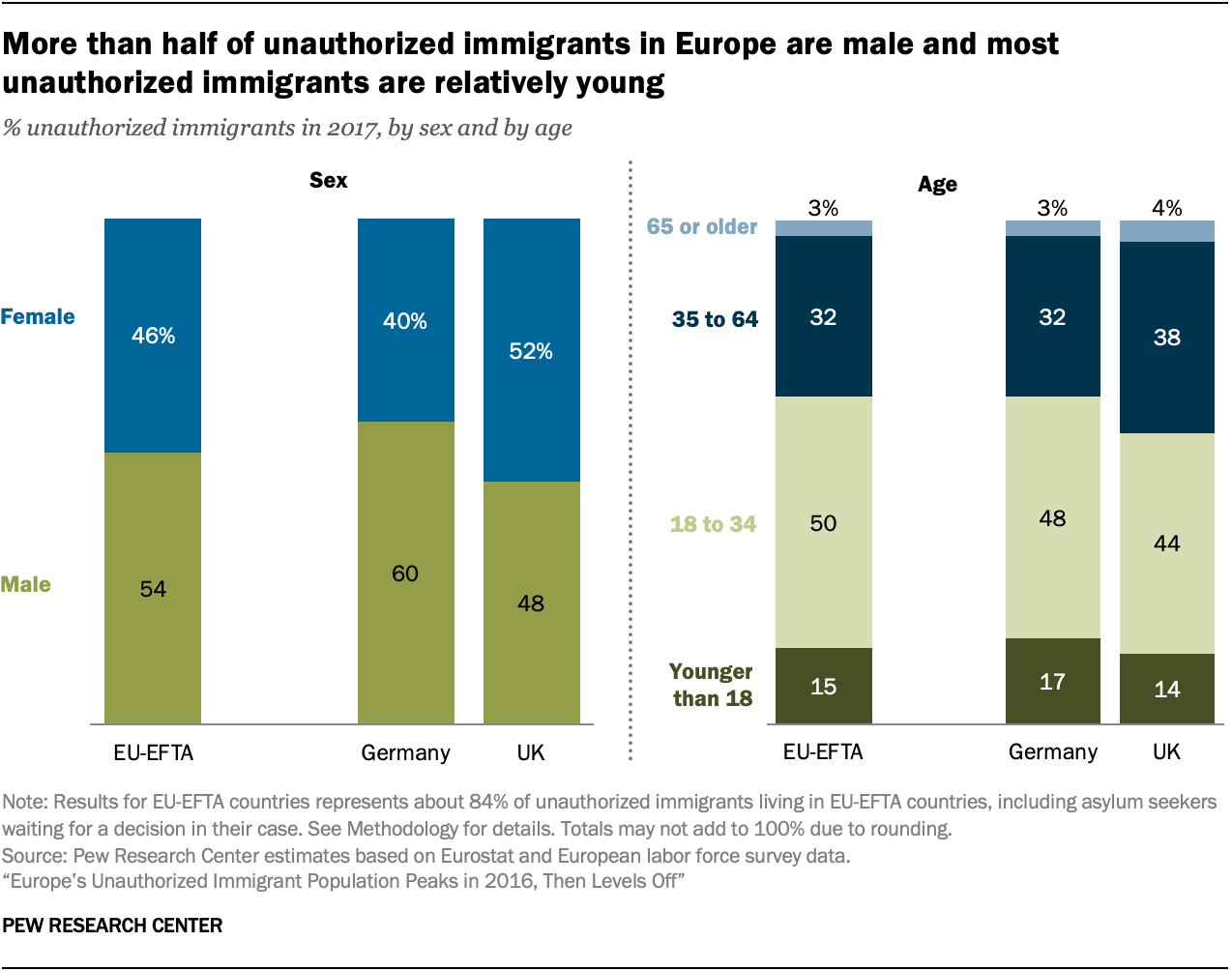 Next: Acknowledgments
← Prev Page
Page1Page2You are reading page3Page4Page5Page6Page7Page8Page9
Next Page →