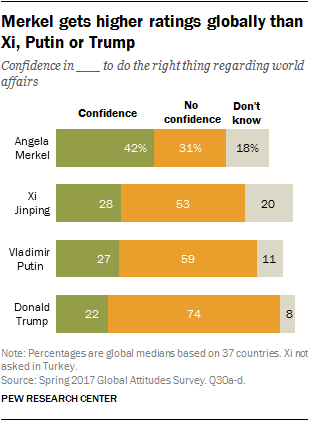 The United States occupies the world stage with other major powers that, especially at a regional level, may even rival the U.S. in terms of influence. The Center’s 2017 survey asked about confidence in the leaders of three other major powers besides the U.S.: German Chancellor Angela Merkel, Chinese President Xi Jinping and Russian President Vladimir Putin. Of the four, President Donald Trump is the least trusted to do the right thing when it comes to world affairs. Overall, a global median of 74% express no confidence in the U.S. leader, while only 22% express confidence in him.

By contrast, Merkel enjoys fairly widespread confidence among publics in much of Europe, Canada and Asia. This includes 89% who express confidence in her in the Netherlands and Sweden. Overall, half or more in 15 of the countries surveyed say they have confidence in Merkel to do the right thing in international affairs.

Merkel is not trusted in Turkey (14%) and Greece (16%), both of which have experienced tensions with Germany over economic and refugee issues. 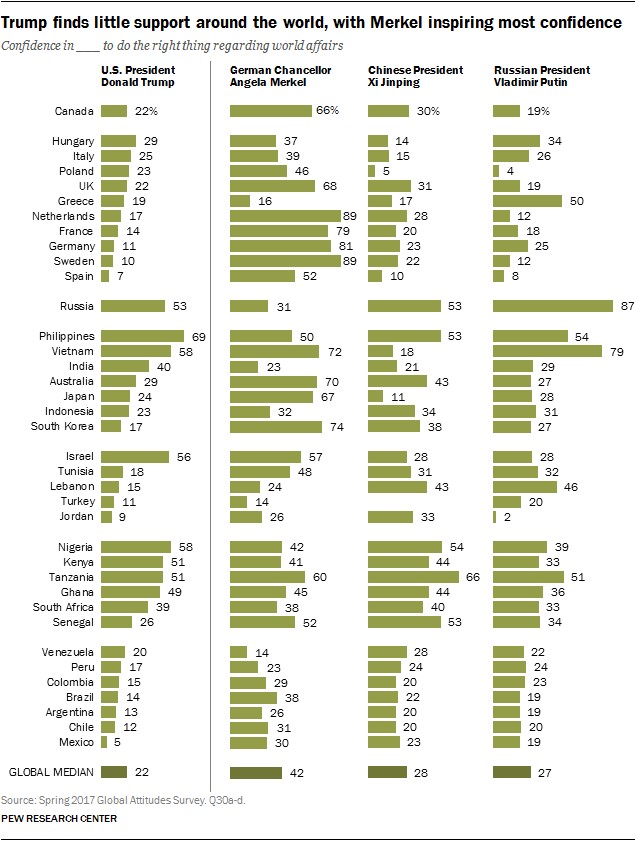 Xi Jinping gets negative ratings in many of the countries surveyed. Across 10 EU countries, a median of only 18% have confidence in the Chinese leader to do the right thing in world affairs. Japanese (11%) and Indians (21%) also lack confidence in Xi, though a majority of Indians (56%) do not have an opinion.

On the other hand, there is strong confidence in Xi in sub-Saharan Africa, where China has made heavy investments over the past decade. Nearly two-thirds in Tanzania (66%) and more than half in Nigeria (54%) and Senegal (53%) have a positive view of his international leadership. Xi also gets significant support in Russia and the Philippines (53% each), both countries with leaders who have pursued improved ties with China.

Putin inspires little confidence as an international leader. Roughly six-in-ten across the 37 countries surveyed say they have little or no confidence in him. Outside of Russia, only in Vietnam (79%) does a majority say they trust Putin’s handling of world affairs. About half or more in the Philippines (54%) and Tanzania (51%) say the same.

Next: Acknowledgements
← Prev Page
Page1Page2Page3You are reading page4Page5Page6
Next Page →