As strife in the Middle East continues to make headlines, from the militant group ISIS to Syrian refugees, the Muslim world is sharply divided on what the relationship should be between the tenets of Islam and the laws of governments. Across 10 countries with significant Muslim populations surveyed by Pew Research Center in 2015, there is a striking difference in the extent to which people think the Quran should influence their nation’s laws. 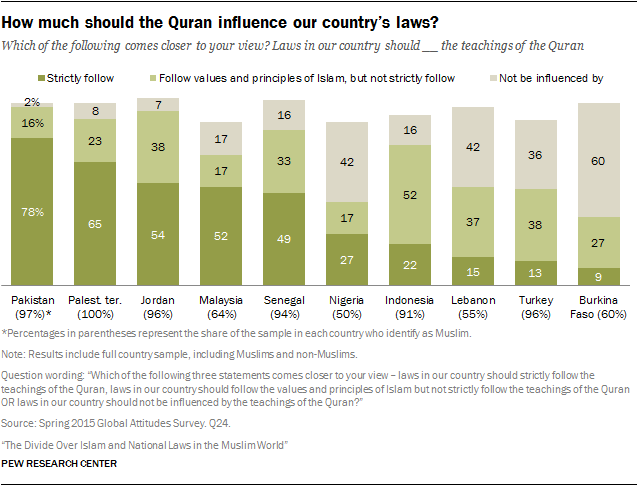 In Pakistan, the Palestinian territories, Jordan, Malaysia and Senegal, roughly half or more of the full population says that laws in their country should strictly follow the teachings of the Quran. By contrast, in Burkina Faso, Turkey, Lebanon and Indonesia, less than a quarter agree. And in many of these countries where non-Muslims make up a significant portion of the population, there are strong disagreements between major religious groups on this issue.

These are the main findings of a recent Pew Research Center survey of 10,194 respondents conducted in 10 countries with significant Muslim populations from April 5 to May 21, 2015. Unless otherwise noted, results are for national populations, including non-Muslims. The percentage of the population that is Muslim in each of these countries ranges from almost all in the Palestinian territories and Pakistan to about half in Nigeria. The survey includes four of the 10 countries with the largest Muslim populations in the world (Indonesia, Pakistan, Nigeria and Turkey).

Where people say their national laws should strictly follow the Quran 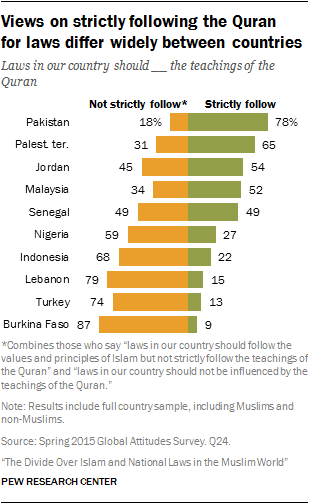 Half or more in four of the 10 countries surveyed say that laws in their countries should strictly follow the teachings of the Quran. This opinion is especially prevalent in Pakistan (78%), one of only five declared Islamic Republics in the world, and the Palestinian territories (65%). Support for strict adherence has grown in the Palestinian territories. In 2011, only 36% of Palestinians said their laws should strictly follow the Quran. 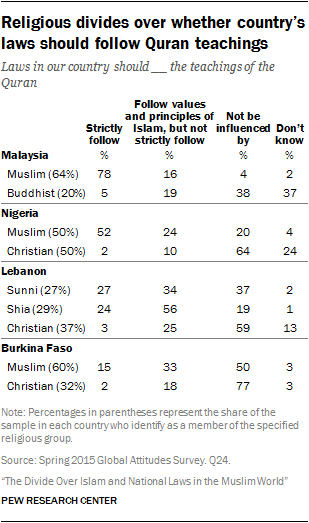 Roughly half of Malaysians (52%) favor strict adherence when it comes to national laws; fully 78% of Muslim Malays hold this view, but only 5% of Buddhist Malays agree. Instead, 38% of the Buddhist minority in Malaysia prefers that laws not follow the Quran, though a similar percentage (37%) does not offer an opinion.

In Nigeria, only 27% among the general population believe that laws should closely follow the Quran, with 17% saying laws should be guided by Islamic principles and 42% saying the Quran should not influence laws at all. Not surprisingly, there is a sharp divide on this question between Nigerian Muslims and Christians. Around half of Nigerian Muslims (52%) prefer the strict interpretation of the Quran for the country’s laws, while 64% of Nigerian Christians prefer the Quran have no influence.

Since 2013, the percentage of Nigerians who say that national laws should be shaped strictly by the Quran is up 8 percentage points. The increase in this sentiment comes entirely from the Muslim population. Views among Christians in Nigeria have not changed since 2013.

People in Indonesia, Lebanon, Turkey and Burkina Faso are more secular in their orientation. Roughly two-thirds or more in each of these countries prefer that laws either be only influenced by the Quran (and not strictly follow its teachings) or that the Quran be left out of lawmaking altogether. In the case of Lebanon and Burkina Faso, this is due, at least in part, to the religious divides within those countries.

Only a quarter of Lebanese Muslims say that laws should strictly follow the Quran, perhaps a reflection of the country’s diverse ethnic and religious makeup and its laws that give each religious group a say in national politics. Half of young Lebanese (18- to 29-year-olds) say that laws should not be influenced by the Quran, compared with 36% who say this among Lebanese 50 and older.

In Turkey, which was founded as a secular democracy in 1923, 36% say that laws should not be influenced by the Quran, compared with 27% who said this in 2012. Opinions on this issue in Turkey are driven, in part, by devoutness to Islam and age. Muslims in Turkey who pray five times per day or more are far more likely to say laws should strictly follow the Quran (32%) than are those who pray fewer than five times per day (9%). And generally, younger people in Turkey are less likely to say that laws should strictly follow the Quran. 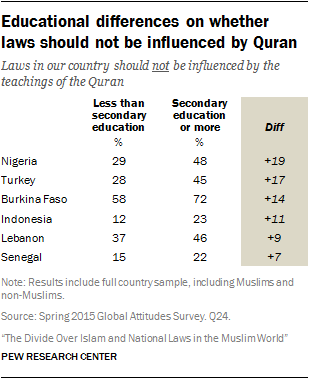