Mali holds a presidential election July 28, its first election since the French military led a January 2013 intervention to oust Islamic rebels from the north of the country. As Malians go to the polls, Africans, on balance, approve of the French military incursion in its former colony and France enjoys a largely positive image in many African nations. In contrast, most publics in the Middle East disapprove of Paris’ action and France’s ratings have slipped in the region.

Meanwhile, a majority in France (62%) approve of their country’s military efforts in Mali. These findings are from a survey by the Pew Research Center, conducted March 3 to April 12 in 13 publics in Africa, the Middle East, and France. (Mali was not included in the 2013 survey). 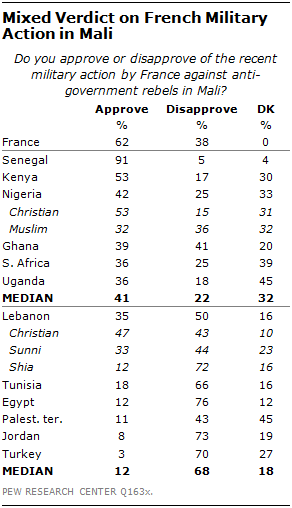 There is qualified support for the French intervention in the sub-Saharan African countries surveyed. Across the six African nations polled, by almost two-to-one, a median of 41% approve of the military action, while 22% disapprove, but a significant portion of those publics (32%) offer no opinion.

Support for the French incursion, which was conducted jointly with the African Union, is especially widespread in Senegal, which borders Mali and is also a former French colony. Roughly nine-in-ten Senegalese (91%) approve. About half of Kenyans (53%) also favor the military action. In Nigeria, a 42%-plurality sees the intervention positively, although there is a clear religious split: 53% of Nigerian Christians approve, while just 32% of Nigerian Muslims agree. Support is more lukewarm in Ghana, South Africa, and Uganda, with less than four-in-ten approving of the French intervention and many offering no opinion. 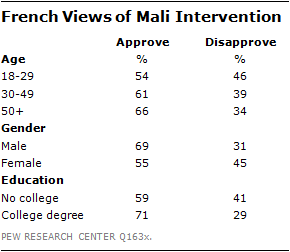 In the Middle East, there is little support for France’s military efforts in Mali, with a median of only 12% agreeing with the action and 68% opposing it. Two-thirds or more disapprove in Egypt (76%), Jordan (73%), Turkey (70%), and Tunisia (66%). In Lebanon, half disapprove, but views vary along religious lines. While 72% of Lebanese Shia oppose the French military effort, less than half of Lebanese Sunnis (44%) and Christians (43%) say the same. In the Palestinian territories, 43% disapprove of the intervention and 45% decline to offer an opinion.

In France, 62% approve of the military incursion in Mali, while 38% disapprove. Support is especially high among older people, men, and those with a college degree. 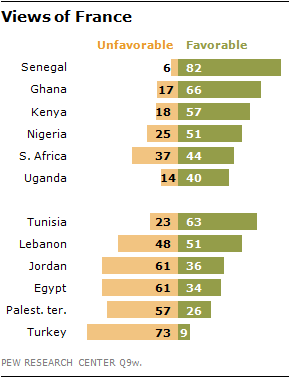 Overall, views of France are generally positive in Africa, with half or more expressing favorable opinions in Senegal (82%), Ghana (66%), Kenya (57%), and Nigeria (51%). Two-thirds of Nigerian Christians see France favorably, while only 36% of Nigerian Muslims say the same. Four-in-ten Ugandans have a positive opinion, but 46% did not offer a view.

France’s image is largely negative in four of the six Middle Eastern countries polled. Majorities of Turks (73%), Jordanians (61%), Egyptians (61%), and Palestinians (57%) rate France negatively. However, even though Tunisians disapprove of the intervention in Mali, 63% in the former French protectorate hold a favorable view of France. The Lebanese are split, with 51% expressing a positive opinion and 48% a negative one. Roughly six-in-ten Lebanese Sunni (63%) and Christians (57%) have a favorable opinion of France, but only around two-in-ten Lebanese Shia (18%) agree. 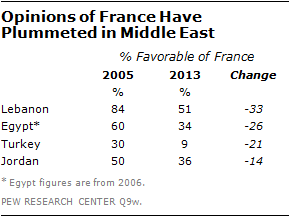 In the Middle East, positive evaluations of France have plummeted since the Pew Research Center last asked this question in 2005 and 2006. For example, 84% of Lebanese had a positive opinion of France in 2005, but now just half hold that view, a drop of 33 percentage points. Substantial declines have also occurred since 2005 in Turkey (-21) and Jordan (-14), and since 2006 in Egypt (-26). This falloff may be attributed to a number of factors: perceived French intolerance of Muslims, France’s major role in the Libyan war, the Mali incursion and other issues.