Two years after Egyptians first poured into Cairo’s Tahrir Square chanting “Down with Mubarak” the legacy of the Arab Spring remains uncertain. Elections have been held and a new constitution is in place, but Egyptian politics are still very much in flux, with fundamental political issues unresolved. Still, polling since the uprising shows that Egyptians have some clear – and ambitious – priorities. They want democratic rights and institutions, a major role for Islam in political life, and an improved economy – a challenging set of demands for President Mohamed Morsi and the new cadre of Egyptian leaders. 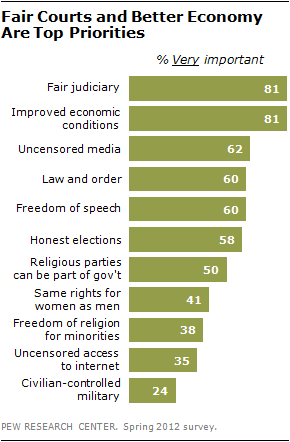 Egyptians consistently express lofty democratic aspirations. In a 2012 Pew Research Center poll, two-in-three said democracy is the best form of government, while just 19% said that in some circumstances a non-democratic form of government is best. Only 13% said it doesn’t really matter what kind of government runs the country.

Moreover, there is a strong desire for specific democratic rights and institutions. About eight-in-ten (81%) considered it very important to live in a country with a judicial system that treats everyone in the same way, while roughly six-in-ten said it is very important to have a free press (62%); free speech (60%); and honest, competitive elections with at least two political parties (58%).

Fewer say it is very important to live in a country with equal rights for women, religious freedom for minorities, and uncensored internet access. Nevertheless, majorities do rate each of these as at least somewhat important.

While Egyptians overwhelmingly value democracy, it is also clear that most want a democracy that is heavily influenced by the country’s religious tradition. Six-in-ten say the nation’s laws should strictly follow the teachings of the Quran – a considerably higher percentage than the 23% who hold this view in Tunisia, where the Arab Spring began. About a third of Egyptians (32%) believe laws should follow the values and principles of Islam but not strictly follow the Quran; only 6% say laws should not be influenced by the Quran (For more on this, see “Most Muslims Want Democracy, Personal Freedoms and Islam in Political Life,” July 10, 2012).

Egyptian views about religion and public life vary somewhat by age. About two-thirds (68%) of those age 50 and older think laws should strictly follow the Quran, compared with 60% of 30-49 year-olds and just 54% of those under 30.

Among all segments of the population, there are major concerns about the economy. In the spring 2012 survey, only 27% said the economy was in good shape, down from an already low 34% in 2011. Meanwhile, 81% described improving economic conditions as a very important priority. And when asked which is more important, a good democracy or a strong economy, Egyptians are divided, with 48% choosing democracy and 49% choosing economic progress.

When Pew surveyed Egypt in spring 2011, just weeks after Hosni Mubarak was forced from office, most were happy that the longtime autocrat was gone – 77% described his resignation as a good thing. A year later, however, it was clear that for many, life had yet to improve in the post-Mubarak era. Just 44% said Egypt was better off now that Mubarak was not in power, while 26% thought the country was worse off, and another 26% said things were neither better nor worse.