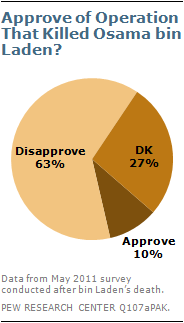 Although Osama bin Laden was not well-regarded in recent years, few Pakistanis approve of the military operation that killed him, and most say it is a bad thing that the al Qaeda leader is dead. Looking forward, many think the killing of bin Laden will create even greater tensions between the U.S. and their country.

Regarding their own government’s role in the operation, Pakistanis are uncertain – majorities or pluralities say they do not know whether the Pakistani government provided intelligence to the U.S., authorized the operation, or knew bin Laden was hiding in Abbottabad.

Along with the killing of bin Laden, another American effort targeting leaders of extremist groups on Pakistani soil is also unpopular: drone strikes. Among Pakistanis who are aware of the drone attacks, about six-in-ten consider them unnecessary.

And Pakistanis are losing enthusiasm for their own government’s battle against extremists – just 37% say they support using the army to fight extremist groups, down from 53% two years ago. 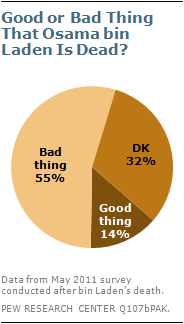 Prior to his death, Osama bin Laden’s popularity had waned considerably in Pakistan. In 2005, 51% of Pakistanis said they had confidence in the terrorist leader to do the right thing in world affairs, but in the spring 2011 poll conducted shortly before his death, only 21% expressed this view.

However, despite the lack of broad support for bin Laden, most Pakistanis (63%) disapprove of the U.S. raid that killed him. Only 10% approve; about a quarter (27%) offer no opinion.

Moreover, when asked, regardless of how they feel about the U.S. military operation, do they think bin Laden’s death is a good or bad thing, 55% say it is a bad thing. Just 14% describe it as a good thing, while roughly one-in-three (32%) do not express an opinion. 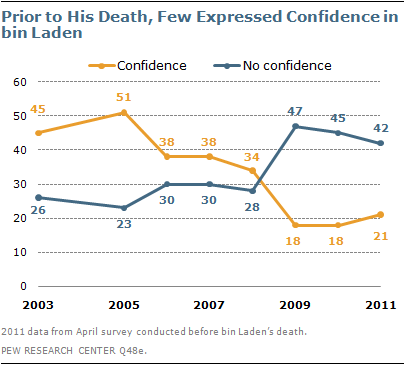 While the raid that killed bin Laden has been a major news story in Pakistan, the U.S. and around the world, it is not necessarily an issue of great interest among the Pakistani public. Nearly four-in-ten (37%) say they have followed news about the raid very or somewhat closely, while 39% say they have followed news about it not too closely or not at all closely. One-in-four say they do not know. 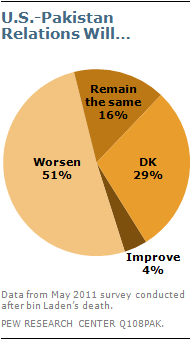 Interest in the story is more common among Pakistanis with higher incomes (54% very or somewhat closely), those who have attended at least some intermediate school (53%), and urban residents (46%).

On balance, Pakistanis believe the U.S.-Pakistani relationship, which has been fraught with tensions for years, will suffer as a result of the military operation that killed bin Laden. Roughly half (51%) think relations between the two countries will worsen as a result, while only 4% think relations will improve and 16% say they will remain the same as they have been. 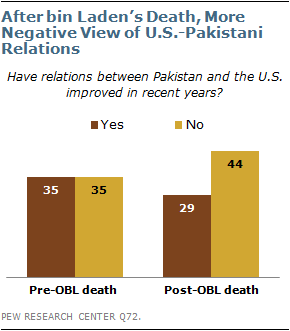 Following bin Laden’s death, Pakistanis became more likely to say the U.S.-Pakistani relationship has worsened in recent years. Prior to the killing of the al Qaeda leader, Pakistanis were divided on the question of whether relations between their country and the U.S. had improved: 35% said yes and 35% said no. After his death, 29% said relations had improved in recent years, while 44% said they had not.

Despite the pessimism about the direction of U.S.-Pakistani relations, most Pakistanis would like to see a strong relationship between the two countries. Six-in-ten say it is important that relations between the U.S. and Pakistan improve; only 22% think this is unimportant.

What Did the Pakistani Government Know? 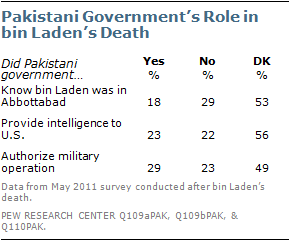 There is no consensus among Pakistanis regarding the extent to which their government was involved in the military operation that killed Osama bin Laden.

Just 18% think the government knew bin Laden was hiding in Abbottabad, Pakistan; 29% say the government did not know this; and a slim majority (53%) has no opinion.

Nearly a quarter (23%) think the Pakistani government provided intelligence to the U.S. that led to the killing of the al Qaeda leader, while an almost equal number (22%) do not believe this. However, a majority (56%) has no view on this issue.

Drone Strikes and the Fight Against Extremists 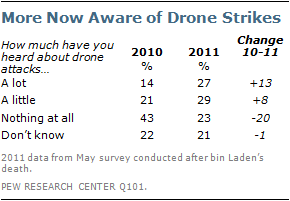 Awareness of U.S. drone attacks against extremists groups and leaders within Pakistan has increased since last year. Today, 27% say they have heard a lot about these attacks, compared with 14% last year. Meanwhile, the percentage of Pakistanis who have heard a little has risen from 21% to 29%.

Familiarity with the drone strikes is linked to education. Those with some intermediate or more education (85%) and those with at least some primary education (68%) are much more aware of these attacks than are Pakistanis with no formal education (35%). Men (76%) are also much more aware than women (36%).

As in previous years, those who know about the drone strikes tend to view them negatively. Nearly all (97%) say they are a bad thing – and 65% say they are very bad. 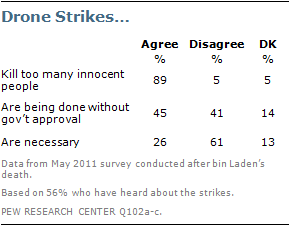 Fully 61% of those who know about the strikes say they are unnecessary and 89% think they kill too many innocent people. 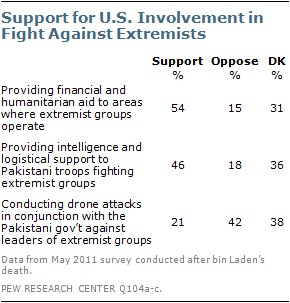 Only 21% of Pakistanis say they support the idea of U.S. and Pakistan working together to conduct drone strikes against extremist leaders.

Other types of U.S. involvement in the fight against extremist groups receive more support. For instance, a slim majority (54%) wants the U.S. to provide financial and humanitarian aid to areas where these groups operate. This is essentially unchanged from last year, when 53% favored U.S. aid, although as recently as 2009, 72% favored U.S. financial and humanitarian assistance.

Nearly half (46%) would like the U.S. to provide intelligence and logistical support to Pakistani troops battling extremist groups. This too is largely unchanged from last year’s 48%, but is down significantly from 2009, when 63% supported this idea. 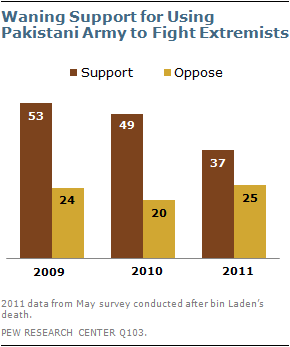 Support is also waning for the Pakistani state’s own campaign against extremists. Currently, 37% of Pakistanis support using the national army to fight extremist groups in the Federally Administered Tribal Areas (FATA) and Khyber Pakhtunkhwa (formerly the North-West Frontier Province), while 25% oppose using the military in this way. Last year, more than twice as many endorsed this idea (49%) as opposed it (20%). The current level of support for using the Pakistani army to fight extremists is unchanged from the survey conducted just prior to the U.S. military raid that killed bin Laden.

Next: Chapter 4. Opinions of the United States and President Obama
← Prev Page
Page1Page2Page3You are reading page4Page5Page6Page7Page8
Next Page →

U.S. Image in Pakistan Falls No Further Following bin Laden Killing Chapter 1. Views of National Conditions Chapter 2. Ratings of Leaders and Institutions
Chapter 3. Death of bin Laden and the Battle Against Extremists
Most Call bin Laden’s Death a Bad ThingThe bin Laden Raid and U.S.-Pakistani RelationsWhat Did the Pakistani Government Know?Drone Strikes and the Fight Against Extremists
Chapter 4. Opinions of the United States and President Obama Chapter 5. Views of Extremism Chapter 6. How Pakistanis and Indians View Each Other Survey Methods