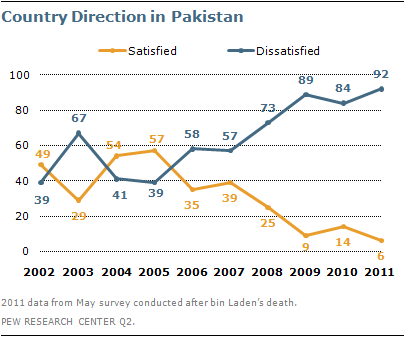 Pakistanis remain deeply dissatisfied with the way things are going in their country. More than eight-in-ten say the nation’s economy is in bad shape, and most are pessimistic about Pakistan’s short-term economic future.

Concerns about rising prices and the lack of jobs are widespread, and about nine-in-ten also rate crime and terrorism as very big problems. At least seven-in-ten describe political corruption, the situation in Kashmir and illegal drugs as major challenges for Pakistan, and smaller majorities offer similar views about pollution, access to clean drinking water, the situation in Afghanistan and emigration. 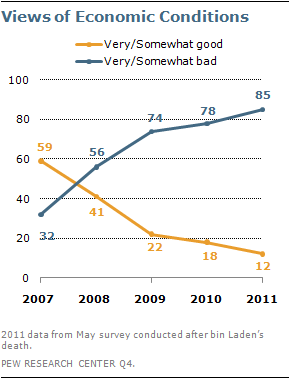 Similarly, ratings of national economic conditions have plummeted in recent years. Currently, 85% say the economic situation is bad, including nearly two-thirds (65%) who say it is very bad. As recently as 2007, about six-in-ten (59%) Pakistanis said their national economy was in good shape and just 32% said it was in bad shape. 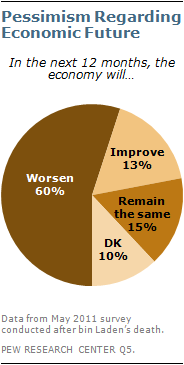 When asked whether they expect the economy to improve, worsen or remain the same in the next 12 months, most Pakistanis are pessimistic; 60% expect economic conditions to worsen, while 13% say the economy will improve and 15% expect it to remain the same.

Those who identify with the ruling PPP are more optimistic than those affiliated with the PML-N about the country’s short-term economic future, although supporters of both parties offer negative assessments. About one-in-five (22%) PPP supporters expect the economy to improve, while about half (49%) say it will worsen and 15% say it will remain the same; among PML-N supporters, just 13% expect economic conditions to get better over the next year, while 67% say the economy will worsen and 15% expect the economy to remain the same. 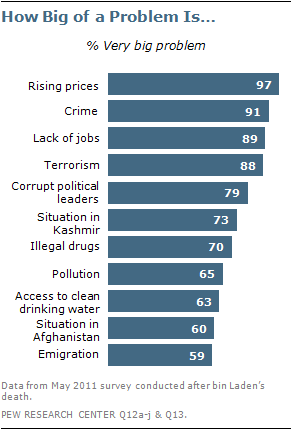 Nearly all Pakistanis (97%) rate rising prices as a very big problem in their country, and 89% express similar concern about the lack of jobs. About nine-in-ten also consider crime (91%) and terrorism (88%) to be major problems.

Nearly eight-in-ten (79%) regard corrupt political leaders as a very big problem. Concerns about corruption have increased considerably since earlier in the decade. In 2002, about six-in-ten (58%) said this was a major problem; by 2010, about three-quarters (74%) expressed a similar opinion.

Next: Chapter 2. Ratings of Leaders and Institutions
← Prev Page
Page1You are reading page2Page3Page4Page5Page6Page7Page8
Next Page →

U.S. Image in Pakistan Falls No Further Following bin Laden Killing
Chapter 1. Views of National Conditions
Widespread DissatisfactionCrime, Terrorism and the Economy Top Concerns
Chapter 2. Ratings of Leaders and Institutions Chapter 3. Death of bin Laden and the Battle Against Extremists Chapter 4. Opinions of the United States and President Obama Chapter 5. Views of Extremism Chapter 6. How Pakistanis and Indians View Each Other Survey Methods