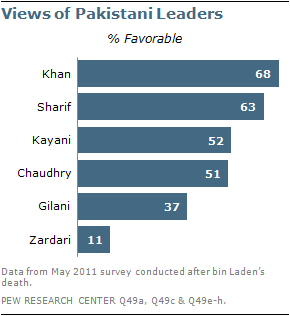 Views of Pakistani President Asif Ali Zardari remain decidedly negative, as they were immediately before the U.S. raid that killed Osama bin Laden. The once-popular president, who received favorable ratings from a solid majority of Pakistanis as recently as 2008, is now viewed unfavorably by more than eight-in-ten. Prime Minister Yousaf Raza Gilani, a close ally of Zardari who had been popular in recent years, now also receives negative ratings.

Pakistanis continue to hold their country’s military in high regard, and most also say the media and religious leaders are having a good influence on the way things are going in the country. On the other hand, most say the police and the national government are having a negative influence on Pakistan. The court system, which was seen as having a positive influence in recent surveys, now receives mixed ratings.

Pakistan President Asif Ali Zardari continues to receive overwhelmingly negative ratings; just 11% offer a favorable opinion of him, while more than eight-in-ten (84%) hold an unfavorable view. In 2010, one-in-five had positive opinions and 76% had a negative view of the president.

Opinions of Zardari have declined considerably in recent years; as recently as 2008, more than six-in-ten (64%) expressed positive views of the president, while just about a quarter (24%) offered negative opinions. 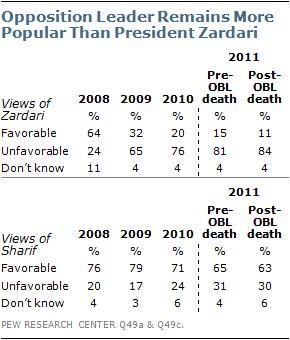 Pakistanis across demographic groups give the president negative ratings, and even a majority (63%) of those who are affiliated with Zardari’s Pakistan Peoples Party (PPP) express unfavorable views of him. Zardari receives his most positive marks in Sindh, although most in that province, a traditional stronghold of support for the PPP, have negative opinions (31% favorable and 69% unfavorable). At least eight-in-ten in Punjab (94%) and Khyber Pakhtunkhwa (83%) offer unfavorable views of the president.

Zardari’s primary political rival, Nawaz Sharif, on the other hand, remains widely popular, although somewhat fewer now express favorable opinions of him than have done so in recent years. About six-in-ten (63%) offer a positive view of Sharif, down from 71% in 2010 and 79% in 2009.

Support for Sharif is overwhelming among those affiliated with his party, the Pakistan Muslim League (PML-N): 85% in the PML-N offer a positive view. Majorities in the PPP also express favorable views of the opposition leader; 66% offer a positive opinion.

Imran Khan, the former world class Pakistani cricket player who founded the small opposition political party Pakistan Tehreek-e-Insaf, is increasingly popular in Pakistan. About two-thirds (68%) have a favorable view of Khan, a vocal opponent of U.S. drone strikes; in 2010, about half (52%) had a positive opinion of him. Khan is widely popular across both main political parties; 81% of PML-N supporters and 61% of PPP supporters give him a favorable rating.

In contrast, Prime Minister Yousaf Raza Gilani, who got high marks in recent years, now receives negative ratings; views of Gilani have become especially negative in the wake of bin Laden’s death. Just 37% now have a favorable opinion and about half (52%) have an unfavorable view of the prime minister. As recently as April, views of Gilani were mixed (45% positive and 48% negative). In 2009 and 2010, solid majorities (67% and 59%, respectively) offered positive opinions of Gilani.

Opinions of Army Chief of Staff General Ashfaq Parvez Kayani, while still positive, have declined somewhat since bin Laden’s death in the military town of Abbottabad. About half (52%) express a positive opinion of Kayani, down from 57% immediately before bin Laden’s death. In 2010, about six-in-ten (61%) expressed positive views. Kayani is especially well-liked by supporters of the PML-N (69% favorable), but a 48%-plurality of those who identify with the PPP also offer favorable views.

Ratings for Iftikhar Muhammad Chaudhry, the Chief Justice of Pakistan’s Supreme Court, have also declined since last year, but opinions of Chaudhry remain, on balance, positive. Currently, 51% say they have a favorable view of Chaudhry, who was reinstated to his post in 2009 after being suspended by former President Pervez Musharraf; about six-in-ten (61%) held favorable opinions of Chaudhry in 2009 and 2010. A majority of those in the PML-N (69%) and a plurality in the PPP (46%) hold favorable views of Pakistan’s chief justice.

Views of Key Groups and Institutions 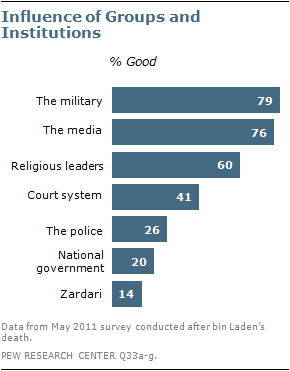 About eight-in-ten (79%) Pakistanis say the military is having a good influence on the way things are going in Pakistan. And while the Pakistani military has come under criticism following the raid on Osama bin Laden’s compound, the Pakistani public’s views of that institution have remained largely unchanged; just prior to bin Laden’s death, 83% said the military was having a positive influence. 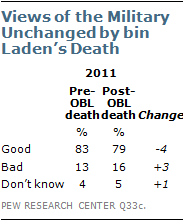 About four-in-ten (41%) Pakistanis say their country’s court system is having a good influence on the way things are going, and 45% say its influence is negative. Ratings for the once well-regarded court system dropped considerably between April and May 2011, following the controversial April 21 acquittal of five men accused of participation in the gang rape of Mukhtaran Mai, a case that has garnered national and international attention. In April 2011, nearly six-in-ten (57%) said the court system was having a positive influence on the way things were going in Pakistan, virtually unchanged from 2009 and 2010.

Consistent with recent surveys, the police receive low marks from the public. About a quarter (26%) say the police are having a positive influence, while two-thirds believe they are having a bad influence on the way things are going in Pakistan.

Views of the national government also remain negative. One-in-five say it is having a good influence on the way things are going in Pakistan and three-quarters offer a negative assessment, largely unchanged from a year ago. In 2009, however, as many as four-in-ten said the national government was having a good influence, and majorities expressed this view in 2007 (59%) and 2002 (72%).

Only 14% say President Zardari is having a positive influence on the country and 83% say his influence is negative. Views of Zardari have become increasingly negative since 2009, although relatively few gave him high marks then; 27% said his influence was good and 68% said he was having a bad influence on Pakistan.

Next: Chapter 3. Death of bin Laden and the Battle Against Extremists
← Prev Page
Page1Page2You are reading page3Page4Page5Page6Page7Page8
Next Page →